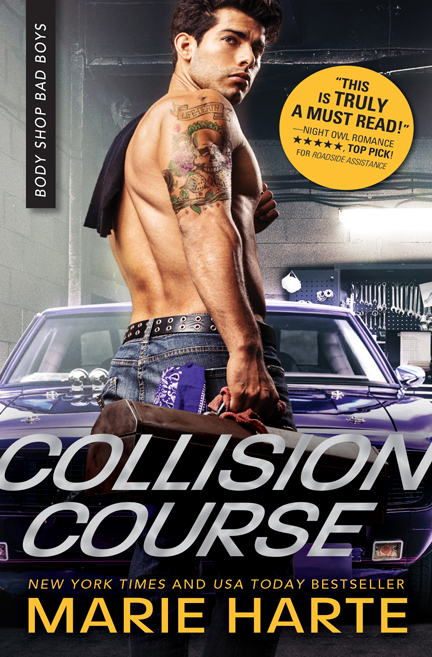 He’s always had a way with the ladies

She won’t give him the time of day

Florist Joey Reeves is working overtime to stay away from Lou Cortez, the ace mechanic with a reputation for irresistible charm. She’s a single mom with enough on her plate—the last thing she needs is entanglement with the hottest guy in town…

And don’t miss the fourth and final book in the BODY SHOP BAD BOYS series–COLLISION COURSE. He’s always had a way with the ladies

She won’t give him the time of day

Florist Joey Reeves is working overtime to stay away from Lou Cortez, the ace mechanic with a reputation for irresistible charm. She’s a single mom with enough on her plate—the last thing she needs is entanglement with the hottest guy in town…

Joey glanced up and froze. The man who’d been haunting her sleep looked even better in the hard light of day.

“H-hello.” She coughed. The guys who worked at Webster’s Garage all looked larger than life, covered in tattoos, muscles, and that indefinable sense of danger they wore like a second skin. But this guy, the tall, Latin lover with dark-brown eyes and lips made for kissing, had ensnared her.

The sight of Lou’s pleasure made Joey feel good for having caused it…and gave her dirty thoughts. Totally inappropriate, rated-R kind of thoughts, which had no place in a coffee shop, for God’s sake. She really needed to get back out in the dating world if a smile got her so hot and bothered. She glanced back down at her latte.

Lou sipped his own drink, then answered, “Today I got to sketch an amazing hood for a sweet Corvette this car collector brought in for a job.”

“I work at Webster’s Garage fixing cars. On the mechanics of them. But I work at Heller’s Paint and Auto Body doing custom artwork. You know, like custom paint jobs?”

“Really?” She studied him, wondering about him. “So you’re an artist.”

“You hit Maaco. Or you go to Heller’s, and his body shop dudes fix you up. You want a bitchin’ barbarian queen on your VW van, you call me.” He grinned. “Although somehow I don’t see you driving an old van.”

“More like a crappy little Toyota, but hey, it runs.”

She nodded, oddly at ease talking with the man. She watched his face, saw his genuine interest in the conversation, and warmed. “You did the work on your car. The snake along the side that disappears in the back. That’s your drawing.”

“It’s amazing. Were you always into art?”

Lou shrugged. “I was kind of forced into it.” He nudged her pastry. “You going to eat that or pull it apart?”

She took a bite, chewed, and asked, “What can you draw? Anything? Or just snakes and skeletons and half-naked barbarian queens?” As soon as she said it, she heard herself sounding so flirty she wanted to bury her head under the table.

Lou laughed. “That’s what my mother thinks I do. Draw naked people all day. I did it once when I was in high school, and she never let me forget it.”

“Yeah. But that was okay because if I was at home drawing late into the night, I wasn’t out robbing a liquor store or rolling some rich jerks for money.” At her look of shock, he sighed. “What can I say? I grew up under the influence of some not-so-nice people. A few smaller-scale gangs. I was a  rebellious kid living in a houseful of women, so you can see why I wanted some guys to hang out with. Fortunately, my mother doesn’t play.”

“A short stint in corrections when I was ten helped change my mind-set. Well, that and  my mother slapping me upside the head, sticking me on babysitting duty for my younger sisters, then having my aunts sit on me. I had nowhere to go but crazy. So when she offered to let me try art lessons to get away from all the women in the house, I went. Turned out I had a knack for drawing, and it stuck.”

“Enough about me. What about you? Have you always wanted to work with flowers? That’s a pretty creative profession.”

Surprisingly pleased to have something in common with the man, she nodded. “I always liked creating things, and I love the outdoors. Gardening especially. When I was younger, my parents kept pushing me to be a doctor, a lawyer, an engineer.” She sighed, aware she’d fallen way below the mark in their estimation. “But I ended up falling into the flower shop right out of high school. I needed a job, wasn’t ready for college.” Not with a baby in hand. She didn’t plan  to mention Brandon to Lou, mostly because she didn’t share her boy with strangers. Even good-looking ones. Her baby never got to know her dates, rare though they were. Not unless she planned to get serious, and it had been eight long years since she’d considered a real relationship with anyone other than her son.

“Well, you’re great at it, I have to say.” Lou nodded. “My sister’s eyes about fell out of her head. She forgot all about the asswipe who dumped her. Thanks for that.”

She blushed. “Sure. I love flowers. They’re bright and cheerful.”

“And dead. Sorry, but I had to point that out.”

She frowned. “Yeah, but even in death they bring joy.”

She parted her lips to ask why and got a bite of bear claw for her trouble. Her lips brushed his finger, and her heart seemed to stop. The sugar in her mouth broke her paralysis, and she chewed for all she was worth.

“Eat. It’s killing me you’re not enjoying this.” He broke a piece off and tried it, feeding himself with the same fingers that fed her. “Oh man. This is good.”

She swallowed before saying, “I know. Why do you think I get one whenever I come in here?”

“When I was helping Del with her wedding, I went to the garage a few times. This was a great place to get my morning coffee.”

“A caffeine addict, huh? Me too.” He nodded. “I typically stay away from the sweets though.” He eased out of his jacket, and she nearly choked on her drink.

She stared at his conditioned torso, seeing the volume of muscle. “I can tell.” Good God. The man was seriously ripped. He leaned to drape the jacket fully over the chairback, and she noted the hint of a tattoo on his left arm, just under the T-shirt.

“Eat up.” He held another bite out to her, but this time she took it from his fingers, not wanting them near her lips. The last time had nearly shot her into cardiac arrest, and it felt way too intimate for a first just-getting-to-know-you kind of date.

They chewed, watching each other. For the life of her, Joey didn’t understand why Lou had such an impact on her, a woman who’d sworn off men. A guy like him, so much bigger than life, handsome, and, yes, charming, was after her? A pretty but not spectacular woman who worked in a flower store?