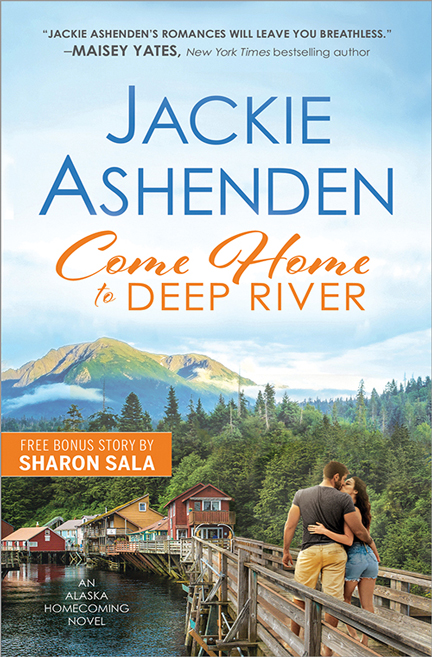 Coming home was the easy part. Facing her will take everything he’s got…

Silas Quinn hasn’t been back to Deep River, Alaska, in years, not since he joined the army. He left behind the best friend he’d ever had. But he knew Hope Dawson was meant for bigger things than Deep River—and he—had to offer. What he didn’t know was that when he left, he took Hope’s dreams right along with him…

Coming home was the easy part. Facing her will take everything he’s got…

Silas Quinn hasn’t been back to Deep River, Alaska, in years, not since he joined the army. He left behind the best friend he’d ever had. But he knew Hope Dawson was meant for bigger things than Deep River—and he—had to offer. What he didn’t know was that when he left, he took Hope’s dreams right along with him…

Then tragedy strikes and sends Silas home, and the entire town is thrown into chaos when they learn what brought him back—he’s inherited ownership of the town and the newly discovered oil reserves under it!

Hope gave up on ever getting out of Deep River. Her mom needed her, then her grandfather died and left her the local hangout to run. Now Si is back in town, stirring up old feelings—including her anger at being left behind. His return brings Hope an offer that can change her life. Love, or adventure, are almost within reach—but she can’t have both…

Flying into Deep River, Alaska, took a special kind of grit. The airstrip was a narrow bit of gravel to the side of soaring mountains, with a river running along one edge, and there was always some kind of crosswind happening that would challenge even the most experienced pilot.

It wasn’t a forgiving landing, and there was no room for error.

Luckily, Silas Quinn hadn’t made an error in all the time he’d spent flying around the wilds of the Alaskan backcountry, and he wasn’t about to make one now.

Particularly not when he was flying into the hometown he’d left thirteen years earlier and hadn’t been back to since.

Especially not when he was coming back to what would probably turn out to be the most hostile reception since Mike Flint had once said at a town meeting that he thought the idea of a luxury motel on the side of the Deep River would be good and why didn’t they build one.

Considering the reason Si was here was fifty million times worse than the idea of a luxury motel, the response he was likely to get once he’d broken the news would probably be more than the one month of cold-shouldering that Mike had gotten.

Si would be lucky if the town didn’t kill him.

That was if this damn airstrip didn’t kill him first.

The clouds were lowering, and the rain was coming down hard, and the wind was a problem, but with his friend Caleb’s death still fresh, Si was in no mood to let the elements have their way with him.

He’d survive this, even if it killed him.

He kept his nerve and brought the tiny plane down, the wheels bouncing on the gravel as he rolled up just shy of the lone hangar that housed Deep River’s entire aviation industry.

As the spin of the Cessna’s propellers began to wind down, Si sat in the cockpit trying to handle the rush of emotions that he had known would grip him the second he touched down. The usual mixture of grief, anger, and longing that Deep River always instilled whenever he thought of his hometown.

There was a special poignancy to it today though. Because Caleb was only a few weeks dead and the shock of the will was still ringing through Si’s entire being like a hammer strike.

Deep River was an anomaly. The entire town was privately owned and had been since the gold rush days, when town founder Jacob West had bought up all the land around the Deep River and declared it a haven for the misfits and rogues who didn’t fit in anywhere in normal society. He’d leased out the land to anyone who wanted to join him, getting them to pay him whatever they could afford in terms of a nominal rent, and in return, they could have a plot of land to call their own and do whatever they wanted with it.

The People’s Republic of Deep River, some called it.

Most just called it home.

Even over a hundred years later, the town was still owned by the Wests.

And that was the difficulty. Caleb was the oldest West and had inherited the town after his father, Jared West, had died five years earlier. And he’d ran the place since then—or at least he had until his unexpected death in a plane crash while running supplies up to a remote settlement in the north.

But that hadn’t been the end to the shocks that Si and his two other friends, Damon and Zeke, had had to endure in the past few weeks.

First, there had been finding out that Caleb had left the entire town to them in his will. And second, oil had been discovered within Deep River’s city limits—oil that the town had no idea was underneath their land.

Oil that, once they knew about it, was going to turn the entire place upside down.

Heavy stuff for three ex-military guys who had nothing to their names but a small company doing adventure tours for tourists, transport runs for hunters, and supply runs for everyone else in the Alaskan bush.

Si stared out at the rain beyond the windshield of the plane.

It hid everything from view, which was probably just as well. He hadn’t wanted to come back here, not considering what he’d been trying to leave behind, but it hadn’t made any sense for either Damon or Zeke to be the advance party.

Therefore, it made sense for him to be the one to break the happy news that firstly, the fact that he, Damon, and Zeke were the new owners. And secondly, there was oil in them thar hills.

Some men might have kept the oil a secret and kept all the riches for themselves too, but Si wasn’t that kind of man, and neither were his friends.

He’d been brought up in Deep River, an extreme environment where everyone learned to rely on each other since that could be all that stood between you and a very uncomfortable death. There was no time for petty grievances—though to be fair, there were a lot of those as well. But when push came to shove, the town pulled together. Because fundamentally, they were all the same. They’d all come here because they didn’t fit anywhere else, because they were escaping something, because they liked the quiet and the isolation and the return to nature.

Because they just plain old liked it.

Si let out a breath.

Jackie has been writing fiction since she was eleven years old. She used to balance her writing with the more serious job of librarianship until a chance meeting with another romance writer prompted her to devote herself to the true love of her heart – writing romance. She particularly likes to write dark, emotional stories with alpha heroes and kick-ass heroines. She lives in Auckland, New Zealand.