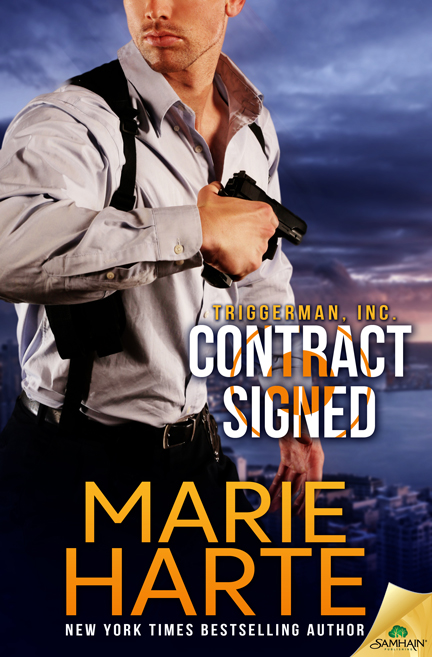 When her handsome, mysterious neighbor suddenly asks her out on a date, Adeline Rose has suspicions he’s fishing for “help” with his bundle of…joy? By date’s end, she’s convinced Noel’s just as distant as he seems—until a scorching goodnight kiss ends with sex against the nearest wall, the heat between them burning away all thoughts of careful.

Now Noel has more than one problem on his hands. Splitting baby duty between three badass assassins, figuring out how to fit more time with Addy into his no-room-for-error schedule…and keeping both of them safe from the danger he’s increasingly sure has followed him home.

Warning: Beware a killer with a heart of gold, a baby who needs constant changing, and unrequited love that’s actually quite…requited.

A gun appeared in Noel’s hand, and he shoved it under his enemy’s chin. In a calm voice that scared the crap out of her because it was so unemotional, he said, “Who sent you?”

“Screw you,” the guy wheezed.

Addy wondered if he’d broken some ribs, because the man sounded in pain and was having a difficult time breathing.

Noel stared, his gaze emptier than anything she’d seen. Then he removed the gun from the underside of the man’s chin and shot him in the knee. The man would have screamed loud enough to bring attention had Noel not covered his mouth. Noel returned the gun to the man’s throat. “Your name, or you lose the other knee.”

It was like something out of a gangster movie. Oh my God. Noel shot someone. She glanced at the dead body. Killed someone.

“I can get it off your prints easily enough,” Noel said quietly. “But I’ll let you live if you give it to me.”

Her mouth dry, Addy found it hard to breathe.

“Wilkes, you bastard. Yeah, you know that name. You killed my brother.”

Noel aimed the gun higher, at the man’s thigh. “Femoral arteries can be tricky things. Who’s your friend?” He nodded to the dead man.

“I just met Rene yesterday. And before you ask again, I can’t tell you who hired me. It was a contract hit. You know how that works.”

Noel shot a glance at Addy, then murmured something to the guy she couldn’t make out. He pulled back the gun, then slammed it into the man’s head and knocked him out. Then Noel was on his phone, asking someone named Big Joe for assistance.

He hung up, stood, then found tape to tie up the living guy’s hands. The dead body he left bleeding all over the floor. Noel moved to the front door and locked it. Then he crouched by Addy, who couldn’t stop shivering.

He sighed and held out a hand. “It’s okay, honey. The danger’s gone.”

When she just stared at him, fuzzy and weepy and scared, he stroked her cheek. And he looked…sad.

“I’m so sorry, Addy. If I’d thought you could be in danger, I never would have brought you with me.” Then he tugged her to her feet and shocked her once more. He hugged her tight, patted her back, and she let the tears fall.