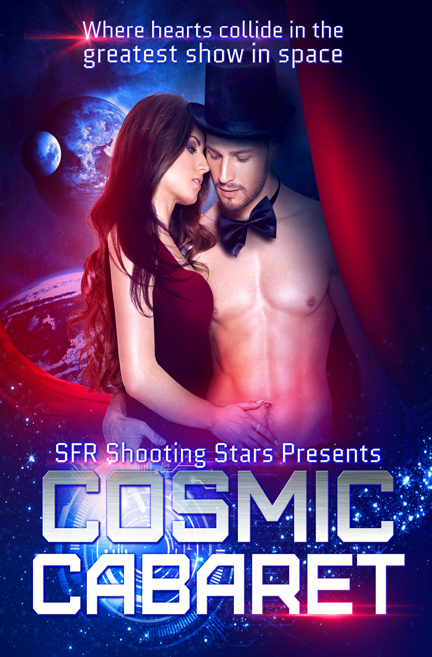 SFR Shooting Stars releases its new SFR anthology, Cosmic Cabaret October 2017, offering a great set of SFR stories by some of the best writers in the genre.

Why Now is the Time to Read SFR

Travel all the way out of our solar system for romance? If you haven’t done it yet, why not? You can get exotic out-of-this-world experiences for the same cost and time as Earth-based stories. Reading SFR, or science fiction romance, is like booking a flight to the nearest airport, then getting upgraded with free air miles and resort hotel points for the destination vacation of a lifetime.

SFR stories hold broad appeal, even for traditional contemporary, historical or paranormal romance readers who’ve never read science fiction. Naturally, all romances offer readers a chance to escape the familiar and to fall in love with someone new. It’s one of the attractions and benefits of reading romance. SFR pushes that encounter to its extreme limits.

Reading lets us live multiple lifetimes through our imaginations and great stories. The SFR genre expands the journey towards love out beyond our towns, countries, planet, solar system, even beyond our galaxy into yet-to-be-discovered universes.

While small town romances may comfort us with their familiarity and family values, SFR titillates us with the unexpected and the “unnatural.” Sure, sometimes, we need the predictability of shared values, common beliefs, the simple boy-next-door firefighter to the rescue. But just as often, or even more for adventurous readers, we seek the wonder and fantasy of what could be rather than what has already been. Sometimes, we need a seven-foot tall blue alien who needs us to rescue him with our fast thinking! SFR is a reading frontier, and romance readers are its intrepid explorers.

First and foremost, SFR delivers fascinating characters. The heroines generally start out tough, trained to withstand challenging environments and dangerous situations, or they get scrappy and resourceful faster than light speed, or they die. We know that in romance, the heroine and hero never die. While SFR still includes its share of virgins and star princesses who need rescuing, many more heroines fight, fly, shoot, lead, and do the rescuing all by themselves.

Meanwhile, the heroes have to be strong enough to match (and catch) the heroines. Most male leads in SFR have survived their worlds through sheer force of physical power, superior intelligence and innately developed leadership skills. The advantages SFR writers imbue their heroes with include shifting abilities, warrior strength and size, psychic abilities, and surprisingly soft hearts, at least where the heroine is concerned. These guys are worthy of any human female’s devotion and affection.

Second, SFR settings can be barbarian, striking, electrifying, colorful: skies lit purple and copper; desolate planets orbited by three glowing, blood red moons; sleek spaceships built and powered to travel the distance of a galaxy in a day; . The tech on your latest smart phone pales in comparison to the SFR replicator’s ability to whip up gourmet meals with the press of a few buttons.

Third, the stories themselves tend toward the breath-taking and exciting. Plots edged with an overriding threat of extinction, violence, galactic wars drive the archetypal love journey forward, despite challenges by destiny, alien cultural misunderstandings and unusual creatures. The hero and heroine are forced to overcome more than a few differences of opinions to reach their happy-ever-after ensuring great tension and unusual twists.

Which brings us to the best reason to read SFR: the triumph of love against impossible odds. If two individuals from different worlds, with different appearances, and with different languages, can overcome all that difference to love each other, then love really does conquer all. In the end, isn’t that why we read romance?

One Response to Cosmic Cabaret: A SciFi Romance Anthology