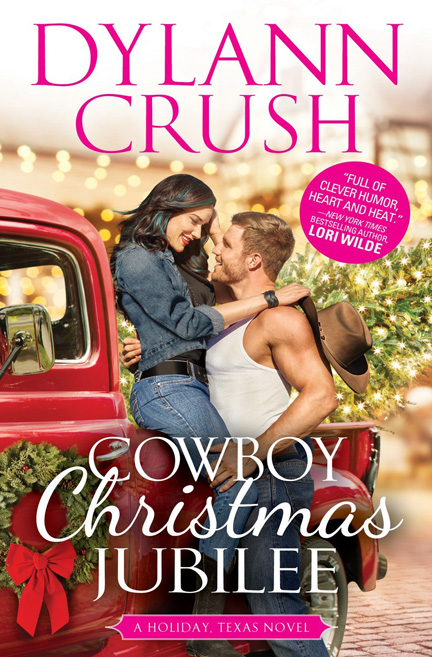 Merry Christmas from your new friends in Holiday, Texas:

The most celebratory town in the South!

When Jinx Jacobs’s motorcycle breaks down outside Holiday, Texas, the last thing she wants is to get stuck in the cheery little town, especially during the holidays. The whole place has gone Christmas crazy, but all she has to do is stay out from under the mistletoe—and do her best to keep that unnervingly attractive cop off her back. Merry Christmas from your new friends in Holiday, Texas:

The most celebratory town in the South!

When Jinx Jacobs’s motorcycle breaks down outside Holiday, Texas, the last thing she wants is to get stuck in the cheery little town, especially during the holidays. The whole place has gone Christmas crazy, but all she has to do is stay out from under the mistletoe—and do her best to keep that unnervingly attractive cop off her back.

Single dad and sheriff’s deputy Cash Walker doesn’t have time for romance, and yet something about the tempting loner twists his stomach up tighter than a tangle of tinsel. He may have finally found the missing piece in his life…but with Jinx so determined to avoid putting down roots, convincing her to stay may just take a Christmas miracle.

Charlie couldn’t be talking about Jinx. The last place that woman would fit in was the Rambling Rose, the oldest honky- tonk in Texas. She’d be more at home at one of the raves he’d broken up at the abandoned grain mill in the next town over.

But there she was, commanding the space behind the bar. Teal hair spilled over her shoulders.

A hot- pink Rambling Rose tank top clung to her frame like it had been spray- painted on. The scoop neck dipped low— too low— revealing an appealing glimpse of cleavage.

All the blood drained from his face to his crotch. Last time he’d seen her, she’d been covered in a black leather jacket that was at least two sizes too big. Now all he could see was skin. Skin covered in ink. Ink with swirls, drawing his gaze over her arms, her collarbone, her chest.

As he stood there staring, silently willing the blood to stop gravitating downward, she looked up. Her eyes locked with his. A flare of surprise flitted across her face, then she looked away.

“Wait. Do you two… Have you met her already?” Charlie squeezed his forearm, her attention bouncing back and forth between him and Jinx.

“Yeah. I ran into her earlier this week. Her bike broke down, and I gave her a lift to Dwight’s.” He faced his sister. “You hired her? What do you even know about her situation? She was evasive when I tried to talk to her. Didn’t want to answer my questions. Could be trouble, Charlie.”

She dismissed his concern with a scowl. “There you go again. Did you try to have a conversation with her, or did you grill her like a cop? You always think the worst about people.” Charlie moved toward the bar. Toward Jinx. “She’s on her way to New Orleans. Just needs to make some money to get her bike fixed up. It’s too bad she’s not planning on sticking around permanently though. She seems to know her way behind the bar, and with Beck spending more and more time on his craft brewery, I could use the help.”

Cash reluctantly followed, moving closer and closer to Jinx with every step.

Jinx looked up, nudging her chin his way. “Hey.”

Charlie twisted to face him, waiting for a response.

“Hi. Uh, looks like you’re working here now.” He tucked his thumbs through his belt loops, rocking back on the heels of his boots.

Jinx reached for a glass from the rack overhead, giving him a good look at the ink covering her triceps. Some sort of quote or something. “What gave it away? The fact that I’m standing behind the bar in a Rambling Rose tank top? Or did you think I sneaked back here to try to steal a beer?”

“Look, I’m in law enforcement. I’m suspicious of everyone.”

“Cash…” Charlie drew his name out while she clamped her hands to her hips. “What did you do to Jinx?”

“Nothing.” That was the truth. He hadn’t done anything to her. Couldn’t blame him for being a little leery of her though. Folks like Jinx didn’t settle in tiny towns in Texas.

“Whatever he did, please forgive him. He takes after the bumpkin side of the family. He’s just not sure what to make of a city girl like yourself.” Charlie whirled around to face Cash. “And you”— she thrust a finger in his face— “you watch your step around here.”

He rolled his eyes, snatched her finger, and flung an arm around her. “Don’t be making idle threats. Jinx and I are just fine. Right?”

Jinx swept a trio of empty mugs off the bar and stacked them in the bin below. “Sure. We’ll be just fine as long as you stay out of my way, ’kay?”

“My pleasure.” He took off his hat, bending into an exaggerated bow, then backed away toward a table to wait for his dinner. Charlie was such a bleeding heart, she’d give a complete stranger the clothes off her back if they looked like they needed them more. He’d have to keep an eye on Jinx. His gut told him she was hiding something, and he’d be damned if he’d let her take advantage of his sister’s hospitality.

The ribs arrived, and he managed to get his fill before the band started. Jinx must have felt his gaze on her. She kept glancing his direction, that swoop of hair falling over her eyes. The guys sitting at the bar seemed to appreciate the new view. The regular bartender, Shep, was good at pulling a beer, but he didn’t provide much in the way of eye candy.

Jinx, on the other hand, had all her assets on full display. The way the good ole boys nudged each other when she bent down to retrieve something behind the bar made his blood heat up a few degrees. Made him want to take off his shirt and throw it over her shoulders. Made him want to punch something.

Jinx looked like the kind of girl who could handle herself. As long as she didn’t cause trouble and kept her hand out of the till, he’d let her bide her time here until she could get her bike fixed up and get out of town. Before he did something he’d regret, he headed out front to make sure the bouncer was actually carding people this week.

The night wore on. The band hardly left the stage. The beer flowed, and the crowd erupted into a few fistfights and borderline brawls, keeping him busy straight through to last call. By the time he made it to the bar for a water, there were only a few die- hard drinkers left.

“How’d your night go?” He leaned against a stool while he filled a plastic cup from the giant cooler of water Charlie kept on the edge of the bar.

Jinx looked up from wiping down the counter. “You talking to me?” She glanced around, obviously giving him a hard time, since no one else was within five feet of them.

“Look, I don’t know what it is about me that’s got your panties twisted into knots— ”

“Chill out, cowboy. There’s nothing about you that’s got my panties or any other part of me in knots. You’re not my type.”

Cash laughed. He might have been rusty, but she sure as hell sounded like she was yanking his chain. Two could play at that game. “Why not? Because I don’t have enough ink covering my torso to reprint the constitution? Or because I’ve never let someone poke my body full of holes?”

She leaned across the bar, close enough that he could look down her shirt if he wanted. Too close. “You might just like some of my holes, cowboy.”