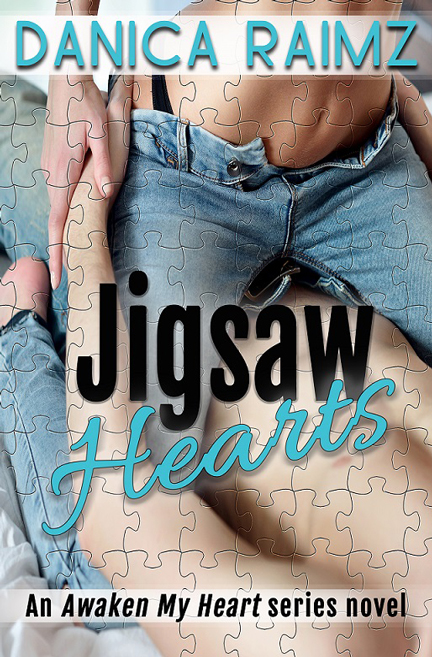 A steamy tale of transformation and redemption from Danica Raimz–JIGSAW HEARTS.

Jigsaw Hearts is the opener in the Awaken My Heart series of novels and novellas covering the unique and lovable Zabriese family. The first (equally steamy) novella, Pieces of You, Pieces of Me, is a follow-up to Ren and Galen’s love story and launched last month. Don’t want to leave those characters behind? You don’t have to just yet!

there were many missing pieces.

It would take nothing short of a selfless, primal sort of love

to fill them in.

Ren: Galen Zabriese is nothing this emotion-phobic girl can afford to be near and everything the world needs to be a better place–although he would certainly say differently on both counts. And for some reason, he sees right through my faltering defenses. He knows I’m hiding things. And no matter what I say or do, he can’t keep his hands off me….

A young, hardworking, and successful editor/journalist for an arts and entertainment website keeps her haunted childhood behind her as best she can by relying on a handful of obsessive coping mechanisms. Despite the appearance of having it all together, Ren Hayden doesn’t do real relationships of any sort, caring only for her criminal stepbrother, Seth, the only person she could ever count on. When Seth inexplicably commits suicide, she is left to deal with Corinne Zabriese–the rather innocent girlfriend he conned, her unique family, and Seth’s trail of disturbing messages that follow her around after his death. Worse? Corinne’s brother, Galen, comes to Ren’s rescue when all her defenses collapse. He sees the real person behind her emotional walls, and while he can’t come to terms with his own misplaced guilt, he becomes hellbent on drawing her true self to the surface. Ren wants nothing to do with his noble, free-spirited nature, except that Galen is the most delicious guy she’s ever met–from his expressive eyes and amazing physique to the way he teases and taunts her into his arms. As Ren holds Seth’s secrets back from Corinne, she feels increasingly undeserving of the steamy, beautiful bond she is developing with Galen and the friendships she is forging with his family. She explodes, flinging venom at the family she was growing to love–just as Seth’s past is about to catch up with all of them.

“This was just an incredible book. It was so beautifully emotional! The whole last third of the book had me in tears about every 20 pages.” –Beth C, Goodreads.com For a limited time … Get an ecopy of Jigsaw Hearts FREE!

Jigsaw Hearts is the opener in the Awaken My Heart series of novels and novellas covering the unique and lovable Zabriese family. The first (equally steamy) novella, Pieces of You, Pieces of Me, is a follow-up to Ren and Galen’s love story and launched last month. Don’t want to leave those characters behind? You don’t have to just yet! Avocado trotted into the kitchen as effectively as a hulking blob of fur could.
“So you buy into all of it? Natural remedies?”

“A lot of it—not all. I just don’t preach it. Hey … watch out for the—” In one swoop, Galen’s arm swung around my waist just as I fell backward.

“Jory!” Galen yelled and tugged me upright. I fell against him. “How many times do you have to be told to take Avocado’s leash off in the house?”

Was he aware that as his gaze was turned toward the living area, waiting for Jory to make an appearance, he still had me in one arm, pulled close?

My heart raced against his. Instinct told me to pull away, but I wasn’t sure if that would seem more awkward. As silly as it sounds, I didn’t want to call attention to myself.

When Jory didn’t answer, Galen turned to me as if remembering I was there. “Uh … you okay?”

Smart ass mode completely off line, I simply nodded, then got lost in the shape of his eyes, their amber-green. At least that’s how they looked in the kitchen light; they had been darker outside on the patio. Either way, they were fascinating, like most things about Galen, whether I wanted to dwell on them or not.

Enough time went by that releasing me would be awkward no matter what.

“Dammit, Ren,” Galen whispered, then abruptly let go. Before I could regain my balance, his palm flew to my jaw to pull my face close. Soft, full lips landed on mine to rest in stillness, spawning a sweet desire I had never known. It heated every inch of space between us and made my pulse pound in my ears like a hammer in an emergency. When Galen did pull away, I took a breath and waited for my manic libido to take charge and fling the man onto the kitchen counter to have its way with him. But it didn’t. At least not in the way I expected. Instead, I wanted the awkward stillness of those last seconds back. I wanted the sweet, gentle taste of Galen back on my lips.

He retreated a step, reached for my hand, then pulled me to him with one tug. We landed against a broom closet as he captured my lips with his once more. This time, he was anything but gentle, and our mouths suctioned together, wide and frantic, over and over, much like the residents of his koi pond. We became locked in a desperate desire to taste each other as fully as possible. Galen’s hands slid up and down the length of my back while mine found their way into the hair I had wanted to touch since Beachy Head. The closet door behind us kept banging rhythmically with the motion of our bodies shifting against each other. When Galen’s soft, warm tongue sought mine, I gave him exactly what he needed simply because I … wanted to. Nothing more occurred to me for the longest time, because ecstasy came bottled in this simple act.

I pulled away, but Galen held onto my waist, staring into my eyes as if he had no clue how I had gotten there. Tentatively, he reached out to gloss a thumb over my wet lips. The sweetness of his touch set off a crackling spark that walloped me into reality. What were we doing? I would have to ruin it. Cheapen it. Wreck it. His sweetness was not good for me, not good for–

I took hold of his thumb, ran my tongue over the tip, then kissed it softly, erotically.

But Galen’s eyes only widened with desire, and he moved to take my lips with his once more. And damn it, I didn’t know what was wrong with me, but how I wanted him to! Only Jory’s feet drummed through the living room, so I jumped aside just as he burst into the kitchen.

“Avocado’s leash,” I gave him.

“Yeah. Ren almost broke her neck as he ran through here.”

“And Avocado is sorry, too.”

“We’re good, Avocado!” I called to the mop with a nervous laugh.

“Jory, why don’t you ask Moms if she wants the bread cut yet. Guests will be here any moment,” Galen suggested.

The boy saluted and headed for the patio.

I turned back toward the first man to make me utterly flummoxed with a kiss. He still looked shocked, as if he had nothing to do with our lips meeting.

Giveaway: Five ecopies of Pieces of You, Pieces of Me.