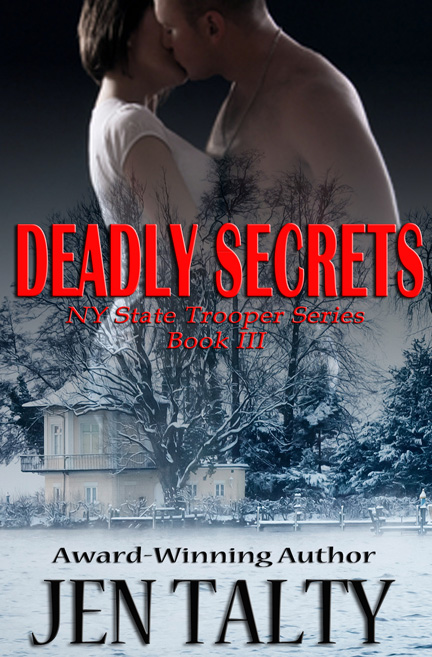 Deadly Secrets is the third book in the NY State Trooper Series. The story is all about how keeping secrets, even though we believe we are protecting the ones we love, can come back and destroy our present. Deadly Secrets is the third book in the NY State Trooper Series. The story is all about how keeping secrets, even though we believe we are protecting the ones we love, can come back and destroy our present.

NY State Trooper Reese McGinn is a broken man. He’s spend the last seven years trying to keep the world at arms lengths until he meets Patty Harmon. She breaks down his defenses, making him long for things he’d once thought he’d never have again.

Patty has her own issues with commitment, but when she finds herself pregnant, she and Reese begin working toward mending their broken pasts.

That is until Reese’s past reaches out from the grave and not only threatens to destroy his relationship with Patty, but threatens her life and the life of their unborn child.

I really enjoyed writing this book. Reese is the kind of character who tried to be something he wasn’t: a loner. He felt he had to protect his heart, so he never stayed in one place too long. He never allowed himself real connections. The thing with Reese that was so fun to explore was that once Patty told him about the baby, the real Reese began to appear. Reese’s character arc is about being who you really are, not the little boy you are trying to protect. It was different twist for me to write. I also really love this cast of characters in general. Small town people who are very close. Reese was a secondary character in Dark Water, book two. Readers kept asking, what’s up with Reese. He was kind of dark and mysterious, but something very sweet and genuine about him and his friendship with the Hero of Dark Water, Frank. Oh, was Frank a hoot to write. He first showed up in the first book: In Two Weeks. My editor came back after reading the first draft and said, “you have to write Frank’s story”. The series starts with In Two Weeks and Jared and Ryan. Then Dark Water with Frank and Lacy. And now Deadly Secrets with Reese and Patty. And I’m hard at work on the fourth book: Murder at the Lake, which takes a secondary character for Deadly Secrets. Each book in the series features some kind of stalking, murder, a deadly lie, secrets kept, but the books are really about mending broken hearts and finding love.