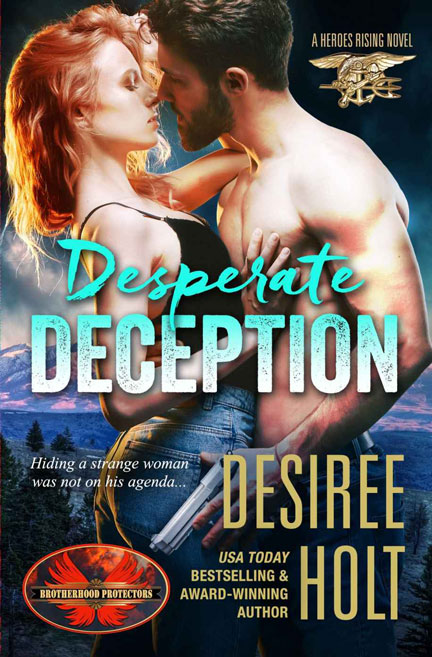 She’d only be safe if she got away…

Lainie Taggert needed to break away from her abusive relationship before it killed her, but Sonny Fitzgerald had all the keys to controlling her. Until she landed in the hospital with bruises and broken bones. And her friend, Drea Halstead, convinced her they had to spirit her away.

His life was in limbo…

Zane Halstead was rootless after three tours with the SEALs, medically discharged and not sure what to do with himself. When Sheriff Alex Rossi in Montana reached out to him with an offer to join his staff, he thought, what the hell? A house came with it along with two horses he could work with. But then his sister pleaded with him to take a battered woman with him and keep her safe. How could he say no? They never expected to fall for each other, Zane with his determination to stay single and Lainie with her nightmares and a vicious bully after her. And a rich one at that. But chemistry and emotions have their own plans, and when Zane gets word Lainie’s ex is on her trail, he realizes he’ll do anything to keep her safe…and for himself. With the help of Sheriff Alex Rossi, he is ready to take on the enemy for his woman.

An excerpt from Desperate Deception…

“I am, but Zane? I really, really need your help. And please don’t say no until you hear it all. Okay?”

“Jesus, girl. What have you gotten yourself into now?”

He listened while she laid out her story for him, especially Lainie Taggert’s condition and why her fear of Sonny Fitzgerald was so intense. As she outlined the plan, his stomach knotted, and his fingers tightened their hold on the phone.

“You’re kidding me, right? This is a joke to yank my chain.”

“No, it isn’t.” Her voice was low. “I’m dead serious. Dead, by the way, being what this woman will be if we don’t pull this deception off and sneak her out of Tampa. Please, Zane. She has no place else to turn. “

He wanted more than anything to say no, but it wasn’t who he was. He knew this last-minute call from Drea might screw up his plans. He also knew she wouldn’t ask unless she was desperate. Take a strange woman to Montana with him to a situation he wasn’t even sure would work? What the hell?

What was he supposed to do with her when he got there? If she was as banged up as Drea said, she’d need medical care, and he had no idea what kind was available in the sparsely populated area where he was headed.

And what about her? If she was running from an abusive relationship, she was probably terrified of men. He’d seen that before. It always made his blood boil, wondering how a man could treat a woman that way. But she had to be scared shitless, and what would make her trust him? Did she know Drea well enough for that?

Plus, he’d have to find a way to take care of her on the trip. Then, when they got to Montana, he’d have to figure out what to do with her. Hopefully, Drea would have some kind of update for him by then. He needed to know things like how long he was expected to hide Lainie away. Where she would go from there. How she’d get her life together.

Fuck. This wasn’t what he needed. He could hardly keep himself together, just taking things one day at a time. But he knew in his heart he’d do that. He was a protector by nature.

“Anything else I should know?”

“Yes. This guy is one mean bastard, and Lainie says she knows something he’d kill her to keep secret.”

He swallowed a sigh.

“You know I can’t turn you down, but I’m leaving in five minutes. Can you get her to that exit by the time I get there?”

“Yes. Yes, yes, yes. Oh, and you’d better bring plenty of cash. If he somehow finds out she’s with you, he can track your credit cards.”

He carried the last of his bags down to the truck and stowed them in the back seat. Then he placed his Glock .9mm in the console along with a box of ammo. Finally, he made sure the knife he always carried was securely strapped to his ankle. He didn’t know if this asshole would suddenly show up or what, but, like every other SEAL, he wanted to always be prepared. Then he climbed into the driver’s seat and pulled out of his parking space.

What the fuck have I gotten myself into?

How to reach Desiree online:

Sign up for Desiree’s newsletter and receive a free book: https://desireeholt.com/newsletter/