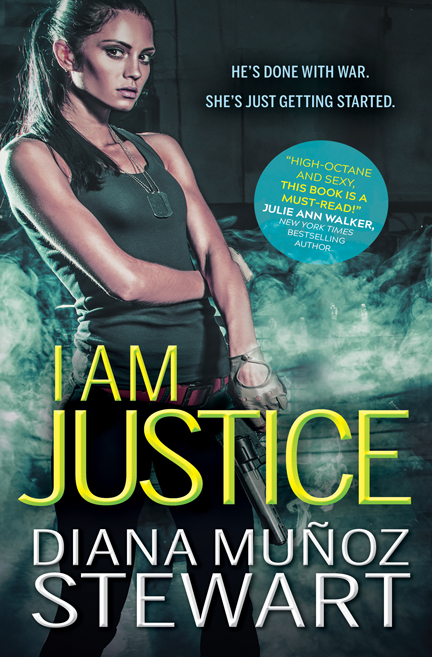 In Diana Muñoz Stewart’s new romantic suspense–I AM JUSTICE–Justice Parish takes down bad guys. Rescued from the streets by the world renowned Parish family, she joined their covert sisterhood of vigilante assassins. Her next target: a sex-trafficking ring in the war-torn Middle East. She just needs to get close enough to take them down…

Title: I Am Justice

This bad-ass band of sisters plays for keeps.

She’s ready to start a war

Justice Parish takes down bad guys. Rescued from the streets by the world renowned Parish family, she joined their covert sisterhood of vigilante assassins. Her next target: a sex-trafficking ring in the war-torn Middle East. She just needs to get close enough to take them down…

Deep inside the stone-and-spire main building  of  the 160-acre campus of the Mantua Academy for Girls, Justice knew the thing that sucked most about a family business. The family part.

She reached her sister’s office…door? Great. Bridget had followed through on her promise to have the door removed.

She rapped on the wood framing the empty doorway. Inside, Bridget sat cross-legged on her mesh, ergohuman office chair, eyes closed. Her frizzy, dark hair stabbed with a silver comb drooped lopsidedly, like a hairy modern art sculpture.

Justice smiled. This was so perfectly Bridget it almost deserved its own word, like freaktacular or weirdiful.

Bridget’s eyes fluttered open and locked on her. Justice instantly felt seen. As in seen below the skin. Shiva, uhm, Bridget quirked an eyebrow. “What can I do for you, Justice?”

“I need to talk to you about the yoga class. Is it true you have the girls chanting in Sanskrit?”

“Yes, but I’m not sure of your question. I submitted the yoga for approval through the director’s office.”

Justice walked into the office and plopped into a chair. “You got approval for yoga, She-pak Chopra. Not to have the girls chanting in Sanskrit. This isn’t good PR. And that’s bad for me. Means I have to do work.”

Bridget rested her hands on the desk. “I will limit my teaching to poses and centering music.”

Justice smiled. “Dammit, Bridge, you’re so easy. Why can’t I have more sisters like you?”

“Perhaps, because you are as abrasive as a starving boar,” a voice said from the hall.

Justice turned. Sheared head, lips painted bright red, skin as satiny smooth and dark as a starless sky, and cocked against the doorway, the generous curve of boys- can’t-help-but-wonder hips clad in a leopard-print skirt. Dada, six-foot-two in spiked heels.

And this was the problem with having no doors. Justice slipped her shoe back on, rose, and crossed the room. “You’re home? Aren’t you supposed to be con- tacting your Brothers Grim informant?”

Dada’s forehead creased. She looked around the hall, but the school staff, a.k.a. no-idea-a-secret-society-of- vigilantes-existed-under-their-feet staff, weren’t in yet. “Have you checked your secure email this morning?”

After passing through security, Justice whisked through the headquarters of the Parish empire in Philadelphia. She was too pissed to pay attention to the repeated nods and hellos. Momma’s morning email had sent her scrambling for her Jeep keys. The mission to take down the global trafficking ring had been put on hold.

Ahead, at the mahogany double doors at the mouth of two intersecting hallways, Momma’s executive assistant, straitlaced Lorena of the cotton button-downs and starched pantsuits, stood from her desk and crossed her arms. Huh. A human barricade.

Good thing Justice had been trained for just such an event.

Sprinting forward, she lifted her foot, planted the arch of her shoe against the edge of the desk, toed herself into the leap, and vaulted into the air.

For a confused moment, she stood within the inner sanctum. A huge corner office with buttoned leather couches, two flat-screen TVs, a hulking Thor of a desk, and a well-stocked kitchen. The self-satisfied grin slipped from her face.

The man—built like a hot night of unforgettable, wild blond hair like a sandstorm, eyes the color of the ocean after a lazy day in the sun—drove the air from her lungs. She couldn’t move. Struck deaf, dumb, and blind meet deer-in-headlights. Damn, the man was tall. Like a wall. A wall of man muscle. So hot.

“Justice.” Leland, Momma’s oldest friend and most trusted adviser, extended his hand with a warm smile. His silver hair gleamed under the canopy of recessed lights. The gray- checkered Armani suit draped over him as if upon the confident shoulders of dignity itself.

Justice took Leland’s smooth hand. He pressed down firmly and tugged her farther inside.

“Sandesh, I’d like you to meet Justice Parish.” Only the stern grip of Leland’s hand told her how annoyed he was. “She does PR for the Mantua Academy and will be working on the Greenville Initiative. She is familiar with all aspects of our newest philanthropy venture.”

Dude was good. Calm. Graceful. And full of shit. Greenville? What was that project about? Giving away money, judging by what Leland had said.

Behind Leland, Momma’s brown eyes showed as little as the rose-colored niqab that covered her hair and face and scars.

Justice turned and gave Leland a rictus grin meant to be a smile. She was usually more successful at hiding her feelings, but a high-pressure situation—you know the kind where you Jack-be-nimbled your momma’s executive assistant, barged into a business meeting, and eye- appraised-seduced-and-fucked a total stranger—had her off her game.

“Actually, my role in all philanthropic projects is still advisory. I wouldn’t want to mislead, uhm, what was your name?”

Blue-Eyes reached for her hand. “I’m Sandesh. Head of the International Peace Team. We’re partnering with Greenville in Jordan.”

He slid his long fingers along her palm in a hot brush that sent her skin tingling. He grasped her hand. Heat suffused her body, brought a flush to her stomach and a smile to her lips. Nice.

Diana Muñoz Stewart is the award-winning, romantic suspense author of the Band of Sisters series, which includes I Am Justice (Sourcebooks Casablanca). She lives in eastern Pennsylvania in an often chaotic and always welcoming home that—depending on the day—can include husband, kids, extended family, friends, and a canine or two. When not writing, Diana can be found kayaking, doing sprints up her long driveway—harder than it sounds–practicing yoga on her deck, flying, climbing, or hiking with the man who’s had her heart since they were teens. Find Diana at www.dianamunozstewart.com.