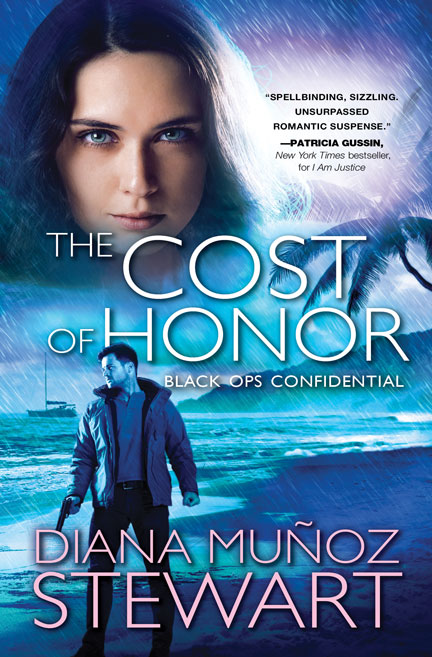 Readers are raving about the Black Ops Confidential series:

“A high-octane…satisfying roller-coaster ride. Stewart’s talent shines.”—Publishers Weekly for The Price of Grace The Cost of Honor

She saved him. But to save her, he’ll have to walk away…

The only male to be adopted into the notorious Parish family, Tony Parish always did right by his vigilante sisters. But when an attempt to protect one of them went horribly wrong, he had to fake his own death to escape his fanatical family. As “Lazarus,” he disappeared to Dominica—only to awaken face to face with the woman of his dreams…

When Honor Silva plunged into stormy waters to rescue a drowning kiteboarder, she had no idea resuscitating the sexy stranger would bring life-changing love—and life-threatening danger—crashing into her world.

As Honor opened the door to lead Laz into her chocolate store, she cursed her cowardice. Why hadn’t she kissed him? She could see he’d wanted her to. Could feel the scorching heat between them. And yet as he’d looked down at her, too handsome to be real, she’d froze.

Inside the store, the cool air smelled of sugar and chocolate and spices. And well it should with cases of chocolate, shelves of wrapped chocolate, fudge and elaborate displays of green and gold boxed chocolates.

As Laz looked around at the store, she closed her eyes, took a deep breath, and let it out with a satisfied sigh.

“I mean the store.” What was wrong with her? “Do you like the store?”

It was. It was, in fact, a perfect candy store. Her chocolatier’s dream. She was glad he enjoyed it, but one thing made her nervous. Well, many things about him made her nervous, but right now this. Getting him to taste something.

Time to bite the bullet. She pointed at the rows of dishes in the glass case, white china, filled with different types of chocolate and truffles. “What’s your favorite?”

He put down a chocolate bar whose wrapper he’d been reading. “My favorite? Would it disappoint you if I said I’m not a huge chocolate fan?”

Would it disappoint her? Was he kidding? “Are you trying to cause me physical pain?”

He laughed. “No. I love chocolate.” He moved closer to her, front to front. “Can’t get enough. You have anything with some bite?”

Biting. Yes. What? She was losing her mind. Oh, he was so hot. But this was her chance. Her chance to make up for her missed opportunity. Bold, Honor. Be bold.

She leaned past him, into him. Her entire front caught fire. She gathered up a jar of chocolate sticks, took one out. Putting the jar back, she brushed his bicep. Hopefully he didn’t notice her shaking hands.

She held up the chocolate stick. “I invented this.”

She pulled off the plastic wrapper. “It’s a kissing stick. The middle is filled with a warm surprise, but as you can see, it’s a little large for one mouth to suck on.”

He grinned at her. “I think I might need a demonstration.”

She grinned back. Oh good. That was what she’d wanted. “The things I do for my craft.”

She put the chocolate straw in her mouth, up to the center, tilted up her chin. He dipped down and captured the other end of the stick.

Heat. Heat like she never felt before shot through her body. She clutched at him, had no choice, no way not to. Her body took over, closed down her mind. Closer. More. Closer. Now.

The chocolate reacted instantly, melting against their lips. Her hot and needy tongue licked the chocolate from his full lips.

The cayenne warmed her already tingling mouth, and she found her boldness in her desire. She probed the kiss, begged him to let her inside.

She moaned and moved into him. He put his arms around her. He’d given her the first move, but he was taking control now, demonstrating his own need.

His body was hard against her, mouth pulling at her, tasting her. The chocolate melted, leaving the cayenne slick between them.

The jingle of the bells over the door brought her to her senses. What was she doing? In the middle of her store?

She broke off the kiss, licked her lips, stepped back from him. They stared at each other. Their breathing heavy and much too loud. The heat in their mouths was nothing compared to the heat building between them. She couldn’t have mumbled a single word.

What was happening to her?

She’d never felt this way about a man. She’d thought it was a myth, this type of attraction—the kind that drove away doubt and common sense. She needed to take him to her room and rip off his clothes.

But was this unique for him too? Or did he act this way or feel this way with all women? A bolt of pain, real pain, pierced her chest. She had to be cautious. This was her first experience with these feelings, this desire, but that didn’t mean it was his. Maybe he did this to all women.

He licked his lips. “Sweet.” His voice was thick with need.

Though she wanted to grab another stick, take another chance with feeling his firm and eager body against hers, she found her voice and a better idea. “My grandfather usually finishes the tour around five, so we have some time. Would you like me to show you the rooms?”

His eyebrows jumped. “That sounds fantastic. Let’s start with yours.”

This man had just read her mind. Not that you needed to be a mind reader. She was sending up red signal flares that burst into the air between them spelling out, I’m going to take you hard. You’re mine.

The Price of Grace (Book 2)

Having earned her MFA in Creative Writing, DIANA MUÑOZ STEWART went on to write several novels that garnered awards and recognition in the paranormal, science fiction, and contemporary romance genres. A believer in the power of words to heal and connect, she blogs and provides web-content on health, writing, and social issues. Learn more or connect with Diana at dianamunozstewart.com, @DMSwrites, and on Twitter at @dmunozstewart.