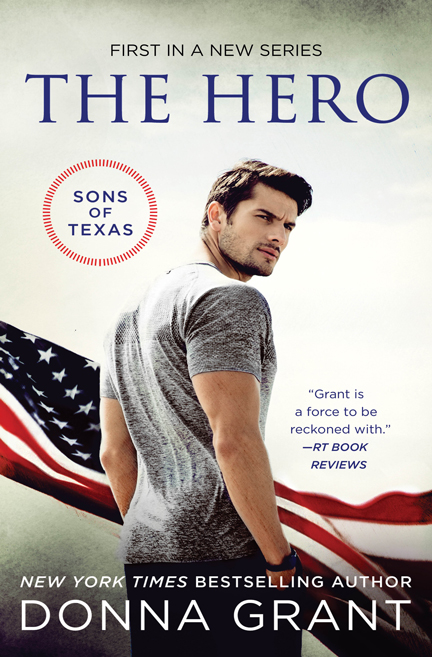 Owen Loughman is a highly-decorated Navy SEAL who has a thirst for action. But there’s one thing he hasn’t been able to forget – his high school sweetheart, Natalie. After over a decade away, Owen is returned home to the ranch in Texas for a dangerous new mission that puts him face-to-face with Natalie and an outside menace that threatens everything he holds dear. He’ll risk it all to keep Natalie safe – and win her heart. . . .

Owen Loughman is a highly-decorated Navy SEAL who has a thirst for action. But there’s one thing he hasn’t been able to forget – his high school sweetheart, Natalie. After over a decade away, Owen is returned home to the ranch in Texas for a dangerous new mission that puts him face-to-face with Natalie and an outside menace that threatens everything he holds dear. He’ll risk it all to keep Natalie safe – and win her heart. . . .

Natalie Dixon has had a lifetime of heartache since Owen was deployed. Fourteen years and one bad marriage later, she finds herself mixed up with the Loughman’s again. With her life on the line against an enemy she can’t fight alone, it’s Owen’s strong shoulders, smoldering eyes, and sensuous smile that she turns to. When danger closes in, she holds close to the only man she’s ever loved…

Excitement or dread? She wasn’t sure she knew.

This wasn’t the first time she’d been on the ranch since her breakup with Owen. In fact, she’d been there several times since discovering Ragnarok, but this time was different.

This time, Owen could be there.

The line disconnected. Natalie didn’t see the black fence that lined either side of the drive, or the cows and horses that grazed peacefully.

Her gaze was locked on the white house that drew closer with each second. By the time she parked in front of the two- story ranch home with its wide, wrap- around porch, all she could think about was the dinner she’d had the week before with Callie, Virgil, and Charlotte.

She put the car in park and glanced around. There was no sign that anyone else was there. Since she expected someone to come out at the sound of her car, she assumed Owen and his brothers hadn’t yet made it to the house.

Or perhaps, luck was on her side, and those choppers hadn’t been bringing the brothers.

She got out of her car, but it was more difficult than she imagined making herself go up the steps to the porch. She might be involved in all of this, but she’d never witnessed a murder scene firsthand.

Frankly, she didn’t want to.

But Orrin’s life was on the line. Everything she and Callie could discover only helped their chances of learning who took Orrin and where Ragnarok was.

She reached the front door. At least she wouldn’t have to see Virgil’s and Charlotte’s bodies. They had already been taken away.

That was her last thought as she walked through the doorway and found herself fl at on her back. Natalie knew the instant the large hands grabbed her that it was Owen.

Her heart skipped a beat, even as she instinctively reacted and used her momentum to pull Owen over her head. She got up, but in the next heartbeat, he had her pinned to the wall.

The heat of him was the first thing she felt. Then it was his hard body trapping her. She felt herself softening, needing to feel him after all these years.

She thought he would threaten her. Instead, he knocked off her cap. His dark brown eyes widened in shock.

How she wished her heart didn’t feel like it was about to explode out of her chest. He was . . . breathtaking. She drank in the very sight of him. Sharp, chiseled features that looked as if they had been fashioned from granite stared back at her. Gone was any hint of the teenager she’d known. Before her stood a man in all his masculine glory.

He’d always been tall, his muscles honed at an early age from working on the ranch. Now, however, Owen filled out his wide shoulders. His light tan tee stretched tightly across his chest, molding to every ripple of muscle in his arms and shoulders. The shirt was tucked into camo pants she imagined were for the desert by their sand and khaki color. His hair was longer, the dark strands shoved away from his face in long waves.

Her surprise at having Owen against her was quickly hidden. Out of the corner of her eye, she spotted two more figures. How she wished she would’ve waited for Callie.

“Hi, boys,” Natalie said. It was the only thing she could think of. Owen frowned, the irritation clear in his sensual chocolate gaze. “What the hell are you doing here?”

At the sound of Callie’s voice, most of the apprehension left Natalie. Now she wouldn’t have to face the Loughman men on her own.

She barely paid attention to anything going on around her. She was too intent on staring into Owen’s eyes. It was obvious that he was irritated to find her there, but he had yet to release her.

And she didn’t remind him of that fact.

Her allowing him to keep her pinned was an indication of how long it had taken her to get over him. And how she hated herself for it. After all she’d suffered, she should be shoving him away.

Her body had other ideas, however. With her blood burning through her and her nipples hard, she ached for his touch.

His eyes dropped to her mouth. Her breath hitched, caught in her throat. Yes! She wanted his kiss. It didn’t matter where they were or who was around.

Dimly, she heard Callie and Wyatt talking. Much to her annoyance, Owen released her. She was more hurt than she wanted to admit.

Perhaps it was for the best. She’d sworn off all men. Especially Owen. She quickly moved to stand beside Callie.

Natalie looked at Owen and said, “I came to help.”

Owen’s breath locked in his lungs as he stared at Natalie’s long, brown hair streaked with strands of copper.

He wanted those deep green eyes of hers to land on him again, to fill with desire . . . again.

She was even more beautiful than he remembered.

The years had transformed her into a seductress who left him breathless and needy.

The girl had become a woman, and what a woman she was. He knew the weight of her breast in his hand, knew how it felt to sink into her body and hear her scream in pleasure.

And yet, the woman before him now held a hint of wariness that hadn’t been there before. What happened to her to take away that lighthearted girl he once knew?

Copyright © 2016 by Donna Grant and reprinted by permission of St. Martin’s Paperbacks.

If you pre-order THE HERO you will be entered for some seriously cool prizes including the **entire** Dragon King series (Dark Heat – Smoke and Fire – including novellas) signed to you, winner’s choice of a bundle of books, Darkest Flame (signed) and some swag, and swag and a coveted DK t-shirt!

But to be entered, you MUST FILL OUT THE FORM. All pre-orders are acceptable as long as you have an order number from the retailer you purchased from.

Pre-order form to THE HERO: http://bit.ly/TheHeroPO

Pre-order form to THE PROTECTOR: http://bit.ly/TheProtectorPO New York Times and USA Today bestselling author Donna Grant has been praised for her “totally addictive” and “unique and sensual” stories. Her latest acclaimed series, Dark Kings, features a thrilling combination of dragons, Fae, and immortal Highlanders who are dark, dangerous, and irresistible. She lives with her two children and an assortment of animals in Texas.