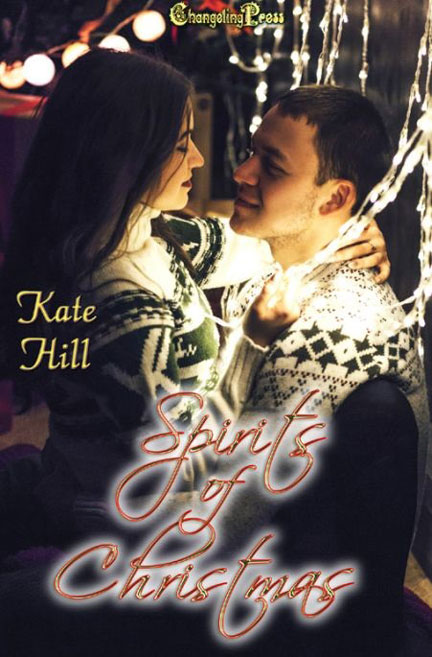 A guest post from Kate Hill, author of SPIRITS OF CHRISTMAS.

In SPIRITS OF CHRISTMAS, on Christmas Eve twenty-five years ago, a brutal murder was committed at the house where Christa Wild works as a live-in maid. When the other servants leave for the holiday this year she stays behind, hoping that any spirits dwelling there will help her regain the psychic power she lost. She’s surprised when the intriguing but disturbed owner of the house appears several days before Christmas…

Writing gives you the chance to create characters you (and hopefully others) find intriguing, funny, or lovable. To me, one of the most important things about creating characters is to let them be themselves. That means I don’t always agree with or like every character I write. Many times it’s the opposite.

While writing my Wild Witches of Beaver Bay series, I liked my lead characters, but sometimes they got under my skin. For example Trinity, the heroine of Trinity and Jeff, was so thick-headed about her real soulmate that she drove me crazy. She had her reasons, but when I stepped out of her head and viewed her as an onlooker, she irritated me.

In the recently released Wild Witches book called Spirits of Christmas, the hero, Joel, deals with a lot of fear along with fame. Though he’s a great guy at heart, there are moments in the story when he isn’t likeable. Luckily for him, the heroine Christa was able to look beyond the surface to the man he really is.

It can be a good thing when you don’t like everything about your characters through every moment of the story. With any luck, that means they’re like real people, who aren’t always perfect.

What do you think about characters with irritating or unlikable traits? Do you mind if heroes and heroines don’t always do what’s acceptable and aren’t always perfect? On Christmas Eve twenty-five years ago, a brutal murder was committed at the house where Christa Wild works as a live-in maid. When the other servants leave for the holiday this year she stays behind, hoping that any spirits dwelling there will help her regain the psychic power she lost. She’s surprised when the intriguing but disturbed owner of the house appears several days before Christmas.

Action star Joel Connor has kept a terrible secret for most of his life. Despite his success as an athlete and actor, he is plagued by flashbacks of a gruesome attack that destroyed his family. This Christmas, Joel returns to the house where it happened to face the ghosts of the past, but finds he is not alone.

Joel and Christa are instantly attracted, but will his psychological state prevent them from finding peace and love?

She hurried upstairs, her adorable bottom swishing. Over the years he’d worked with lots of famous actresses, some of them quite pretty and with the best makeup artists and fashion designers accentuating their assets, but Christa was as pretty as any of them — prettier than most. She was dressed in jeans and a sweatshirt, her dark hair in a ponytail, and not a hint of makeup. Very pretty girl.

With Christa upstairs, it would be a great time to explore the house without the risk of losing control in front of her. He’d been here for a few minutes now and so far, so good.

He walked slowly around the parlor and then headed down the hall to the kitchen. His heart pounded again and he placed a hand on the wall to steady himself.

He made it to the kitchen. It was hot and he couldn’t breathe.

He jumped and spun around, his muscles coiled. Fight or flight reaction, and he was ready to fight. About Kate: Kate Hill is a vegetarian New Englander who started writing over twenty years ago for pleasure. Since 1996, she has sold over one hundred short stories, novellas, and novels.

She prefers to blend genres, and she loves horror and a happily ever after, so her books can be a bit unusual. If you’re looking for romance with witches, aliens, vampires, angels, demons, shapeshifters and more, there’s a good chance you’ll find something to your taste in her backlist.

When she’s not working on her books, Kate enjoys reading, working out, and watching horror movies. She also writes under the name Saloni Quinby.