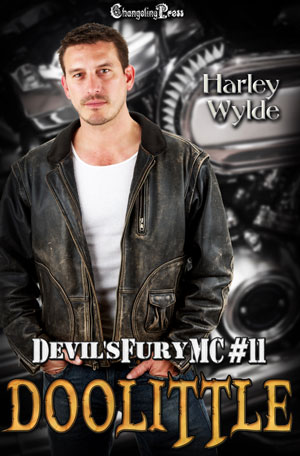 When you think of motorcycle club romances, you probably envision law breakers. Rough men who take what they want and don’t care about the consequences. While the men of the Devil’s Fury MC do fall a teensy bit into that mindset, they’re not all the same. Doolittle is not only a patched member of the club, but he’s also a veterinarian.

In real life, bikers could be the police officer living next door to you, the veteran you see at the grocery, or the law-breaking man who’s been to prison one too many times. They come from all walks of life, and with Doolittle’s story, I wanted to show that.

I write motorcycle club romances because they mean something to me. My first member of my great-Aunt Betty and Uncle Bob were of their visit to my house when I was only three or four years old. They rode up on their motorcycles, heading home from a cross country trip. Aunt Betty was unlike anyone I’d ever met before. She part of the Motor Maids, and even made it into a few American Motorcycling magazine articles.

She and Uncle Bob are now gone, passed on to the next life. They’re both missed, but never forgotten… and neither is their love of motorcycles.

Minnie — The Reckless Kings told me it was pointless to pine after Satyr. I kept offering myself to him, hoping he’d see me as something more. I was a fool. All that man will ever see when he looks at me is a club girl. I’ll always be trash in his eyes. So when the President offers me a chance at a new life, I grab on with both hands. It might mean living with yet another club — the Devil’s Fury — but once I meet Doolittle, my entire world turns upside down. I’d thought myself in love with Satyr, but I was so very wrong. Doesn’t matter. Same situation, different man. I might be starting my life over, but Doolittle knows what I am, what I’ve been… and he’ll never want someone like me as his old lady.

Doolittle — Beast asked a favor and I gladly agreed. I have no problem with a woman who wants a fresh start. Before I even met Minnie, I’d offered to let her work at my clinic. I don’t know what I expected. But the stunning woman who shows up leaves me tripping over myself. I’ve never met anyone like her before, and the instant connection between us is startling. Just one problem. Well, three. The first is Meredith. The girl won’t take no for an answer and is determined I’ll be hers. The second is that Minnie feels unworthy of being mine. I’ll just have to prove her wrong. The third I never saw coming, and it just might change everything.

WARNING: Doolittle is part of the Devil’s Fury MC romance series and contains bad language, violence, and adult situations. You’ll also find entirely too many adorable animals, no cheating, and a guaranteed happily-ever-after.

The gates to the Reckless Kings compound opened as I drove up. I stopped just inside the gate and leaned out to speak with the newest Prospect, Bronsen. “Can you tell me how to get the guest house? I’m supposed to meet with Doolittle.”

Bronsen hunkered down and braced his arms on the door of my small SUV. “Follow the road to the right. You can see Beast’s big a** house from here. Go past it and look for a gray Chevy Silverado. That’s what Doolittle drove here.”

He backed away and I followed his directions, finding the house easily enough. I parked next to the truck and checked my reflection in the mirror, making sure I didn’t have flyaway strands of hair sticking up every which way. Snapping the visor shut, I took a breath to steady my nerves, and got out.

My door had barely shut when two paws landed in the middle of my chest, and I was knocked off my feet. My a** met the concrete driveway and I winced, knowing it would bruise. The fluffy giant grinned a doggy smile at me. “Well, hello to you too. If that’s how you greet everyone, you may need obedience training.”

“Sorry about Goliath. He thinks he’s the size of a loaf of bread,” a deep voice said from nearby.

I craned my neck back and saw Doolittle standing on the porch. Even though I hadn’t met him before, he definitely wasn’t one of the Reckless Kings. Far as I knew, only one Devil’s Fury member had come to visit. “That’s a perfect name for him.”

I gave the giant floof a shove so I could stand up. Dusting off my pants, I approached the house, trying to get a better glimpse of my possible boss. I went up the steps and nearly tripped over my feet when my gaze met his. Holy hell! Beast wants me to work with this guy?

I stared, and then did the most embarrassing thing ever. I blurted out the first thing that popped into my head. “You’re gorgeous.”

My cheeks burned and my eyes widened. I could feel my heart racing and I wondered if it was too late to get back in the car and pretend this never happened. Doolittle chuckled and shoved his hands into his jean pockets.

My face like I’d spiked a fever of a million degrees. He thought I was beautiful? Sure, men had told me that plenty of times. Usually right before they tried getting in my pants. Doolittle only winked then tipped his head toward the front door.

“Why don’t we go in and discuss the job? I can go over the day-to-day details of what you’ll be doing, what it pays, and all that fun stuff. Then if you haven’t eaten dinner yet, maybe you can stick around and share some pizza with me. Although, I should warn you I placed the order right before you got here, so if supreme isn’t to your liking, you’re out of luck.”

Doolittle is now available at these online retailers:

When Harley’s writing, her motto is the hotter the better — off the charts sex, commanding men, and the women who can’t deny them. If you want men who talk dirty, are sexy as hell, and take what they want, then you’ve come to the right place. She doesn’t shy away from the dangers and nastiness in the world, bringing those realities to the pages of her books, but always gives her characters a happily-ever-after and makes sure the bad guys get what they deserve.

The times Harley isn’t writing, she’s thinking up naughty things to do to her husband, drinking copious amounts of Starbucks, and reading. She loves to read and devours a book a day, sometimes more. She’s also fond of TV shows and movies from the 1980’s, as well as paranormal shows from the 1990’s to today, even though she’d much rather be reading or writing.

You can find out more about Harley or enter her monthly giveaway on her website. Be sure to join her newsletter while you’re there to learn more about discounts, signing events, and other goodies!