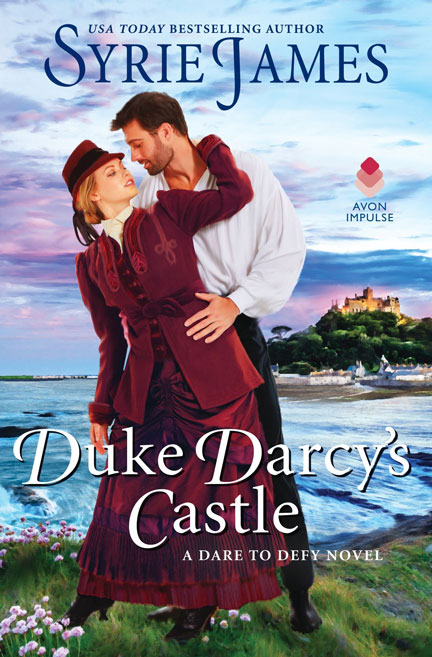 In Syrie James’ DUKE DARCY’S CASTLE, Lance Granville, the Tenth Duke of Darcy, was none too happy to give up his career in the Royal Navy to inherit the family title, complete with an ancient castle he needs to renovate. When an architect arrives on his doorstep, Darcy is astonished to discover that she’s a woman.

Kathryn Atherton has one goal: to become the first woman architect in Britain. Marriage doesn’t figure in her plans. Despite the odds, her schooling is behind her. Now she needs experience. When she’s sent to a small tidal island in Cornwall to remodel a castle, the last thing Kathryn wants is to be attracted to its roguishly handsome owner. Lance Granville, the Tenth Duke of Darcy, was none too happy to give up his career in the Royal Navy to inherit the family title, complete with an ancient castle he needs to renovate. When an architect arrives on his doorstep, Darcy is astonished to discover that she’s a woman.

Kathryn Atherton has one goal: to become the first woman architect in Britain. Marriage doesn’t figure in her plans. Despite the odds, her schooling is behind her. Now she needs experience. When she’s sent to a small tidal island in Cornwall to remodel a castle, the last thing Kathryn wants is to be attracted to its roguishly handsome owner.

Kathryn is determined to keep things professional, but the sizzling attraction between her and the duke quickly blazes out of control. When Darcy learns that Kathryn is an heiress whose fortune would save St. Gabriel’s Mount, he wages the most important battle of his life: to woo and win the woman who’s captured his heart. But (in an homage to Austen), the Duke’s first proposal is so Darcyesque, he is refused. In any case, duchesses can’t be architects. And Kathryn has worked too long and too hard to give up her career for anyone…

Lance sat back in his chair and waited, his eyes on Miss Atherton.

The clock on the mantel ticked off the minutes as she sketched. From the angle of her notepad he couldn’t see what she was drawing, but he could guess—no doubt some altered version of this room, as a last-dash attempt to persuade him.

She was tireless, this woman. Like a dog with a bone. Well, she was barking up the wrong tree. The estate was broke. He couldn’t renovate a single room of this castle even if he wished to.

Still, he had to admire her tenacity. Miss Atherton really wanted this, he could tell. It was a pleasure to watch her draw. She made a pretty picture, sitting there by the window with the last rays of the setting sun bringing out the highlights in her golden hair.

Her pencil was flying at lightning speed. He’d observed sailors sketching on deck for nearly two decades, some with real talent, but he didn’t think he’d ever seen anyone draw this fast.

Part of him wished he could come up with a reason for her to stay at St. Gabriel’s Mount. The last week had been a barrage of visits from creditors, funeral directors, tailors, local parishioners, his land steward, and his solicitor (the last being the least objectionable, since Megowan was a friend). Lance could use a little respite from all that. And he always welcomed the company of a beautiful woman.

This woman was far more than just beautiful. Although they’d only just met, Lance was growing more intrigued by her by the minute.

She was obviously intelligent. She had drive, courage, and initiative. To attempt to be the first female in her line of work—in any line of work, he supposed—presented an enormous challenge. Yet she seemed to have undertaken it without blinking. Despite all obstacles, she didn’t appear to be giving up.

Ten more minutes ticked by while he patiently waited. He made a pretense of going through some papers on his desk, but in truth was content to simply drink in the sight of Miss Atherton as she worked. After a few final strokes with her pencil, she stood.

“This is just a rough sketch,” she explained, passing him the notebook, “my first thoughts about a possible way we could redesign and reimagine this space.”

Lance studied the drawing. It was a furnished room, depicted by a highly skilled hand.

“The study is currently very dark,” she noted, “and the furniture is growing threadbare and is oversized for the space. Being that you have just come from life on board a ship, I thought you might enjoy a new look, something closer to your own sensibility.”

“A new look,” he repeated. It certainly was new. The shape and dimensions resembled those of the existing study, but other than that, it was a room he didn’t recognize.

“My father owns a shipyard which I visited frequently as a girl. The captain’s quarters, I recall, were efficiently designed to make maximum use of a minimum space. My thinking was: brighten it up by painting the walls white. Build in cabinets and drawers to hide things away. Hang new artwork, perhaps of your favorite ports of call. Replace these heavy draperies with shutters which can be fully opened to let in the light. And find smaller, simpler furniture. Possibly custom-made from a shipyard.”

Lance was at a loss for words.

Everything she had described was elegantly illustrated in her sketch. It was difficult to believe it was the same room. The cluttered, gilded look was gone, replaced by sleek, streamlined furniture and a nautical theme. Half of the bookshelves had been replaced by modern-looking cabinets and built-in drawers. A ship’s wheel hung over the fireplace. A life preserver and the cheerful image of an anchor adorned another wall. A model of a sailboat rested on a small table, a globe on another. The overall effect was light, bright, open, masculine, and . . . very appealing.

“I reimagined this alcove as a sailor’s berth,” she was saying, “thinking you could use it as a reading space or a place to nap. We could build in a narrow bunk or even hang a hammock.”

Lance nodded slowly. Somehow, this woman who had known him for less than an hour had hit upon exactly what he would want to do with this room, without him even knowing it himself.

“I don’t know what to say, Miss Atherton,” he began, finally finding his voice. “Your ideas are clever and your skill and speed with a pencil is most impressive.” Before he could go on, a knock sounded on the study door. “Enter!” he barked.

His gray-haired housekeeper hobbled in. “Forgive me for interrupting, Your Grace.” Mrs. Morgan darted a confused look at Miss Atherton, and went on: “A trunk has been delivered. John insists the cart man said it belongs to a lady. I said he was mistaken as you were expecting a gentleman down from London today.” Three American heiresses defy their family’s wishes, and social convention, to strike out and find their own happiness in late Victorian Cornwall.

Brainy and college-educated, American heiress Alexandra Atherton will do anything to avoid marriage to the English peer her mother has chosen for her—even abandon the life of privilege she’s always known. But as her escape goes horribly wrong, Alexandra must invent a new identity to gain the help of a handsome stranger.

Summer of Scandal: A Dare to Defy Novel (Book 2)

An American heiress and an English earl fight against the conventions of society — and their attraction to each other — in the second book in the Dare to Defy series by USA Today bestselling author Syrie James. SYRIE JAMES is the USA TODAY and Amazon bestselling author of thirteen novels of historical, contemporary, and young adult fiction and romance. Her books have hit many Best of the Year lists, been designated as Library Journal Editor’s Picks, and won numerous accolades and awards, including Best New Fiction by Regency World Magazine (the international bestseller “The Lost Memoirs of Jane Austen”), and the national Audiobook Audie for Romance (“The Secret Diaries of Charlotte Bronte”, also named a Great Group Read by the Women’s National Book Association). Los Angeles Magazine dubbed Syrie the “queen of nineteenth century re-imaginings,” and her books have been published in twenty languages. A member of the Writer’s Guild of America, Syrie is also an established screenwriter and playwright who makes her home in Los Angeles. An admitted Anglophile, Syrie has addressed audiences across the U.S., Canada, and the British Isles.