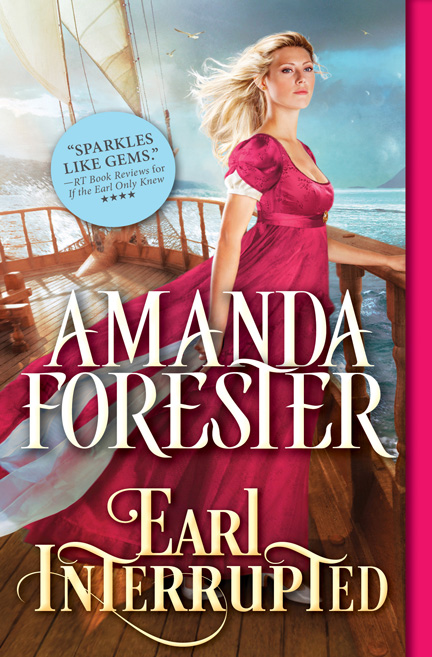 EARL INTERRUPTED by Amanda Forester. After restoring his fortune as a notorious privateer, Captain Robert Ashton, Earl of Darington, goes to London in search of a bride. Instead, he finds unexpected dangers and unknown assailants. He is shot and left for dead. Life on the high seas was far calmer.

Enter Miss Emma St. James. She may appear sweet and demure, but she quickly proves herself to be equal to any challenge, including saving Darington’s life. Just when Darington is sure he has found his perfect bride, she reveals she’s betrothed to another… After restoring his fortune as a notorious privateer, Captain Robert Ashton, Earl of Darington, goes to London in search of a bride. Instead, he finds unexpected dangers and unknown assailants. He is shot and left for dead. Life on the high seas was far calmer.

Enter Miss Emma St. James. She may appear sweet and demure, but she quickly proves herself to be equal to any challenge, including saving Darington’s life. Just when Darington is sure he has found his perfect bride, she reveals she’s betrothed to another.

“First sailed at twelve, joined right after my father’s death. First tour saw action at the Nile with Nelson,” said Darington in his understated manner.

“You were with Nelson at such a young age? Why, you are quite the hero,” exclaimed Emma.

“I ran powder. Tried not to get shot.”

“An admirable goal. I fully support it!”

Dare turned back to her with warm eyes. “Considering my recent experience, I quite agree.” His dark features gleamed a roguish enchantment in the moonlight.

A shiver ran down her spine.

Dare shrugged out of his greatcoat and, ignoring her murmurs of protest, put it around her shoulders. The heavy wool coat was warm from his own heat and stoked a fire within her. His scent lingered and she breathed deeply, feeling a little giddy at being draped in his coat as if wrapped in his arms.

“You should keep your coat. It is cold and you are still recovering,” Emma protested.

Dare gave her another of his shrugs and stepped close to her, reaching into the pocket of his coat that was wrapped around her. “This is for you.” He held out his hand, revealing a small, white shell.

Surprised, Emma took the small shell from his hand. It had a light gray, curved outside shell and a glossy, smooth, pink surface within. She looked up at him, wondering its significance. He continued to stare at her with an expectant air. She wished she understood the meaning of the gesture.

“It is for you,” he explained. “A gift. There are no flowers in January and your guardian is not present so…”

“Oh! A gift for me?” Emma realized this was his attempt at wooing her and her heart cracked open. “But how did you…? Please do not tell me you walked all the way to the beach to find me a shell.” She looked down from the edge of the cliff to the beach below.

“I confess Jonathan assisted me.”

“But you should not attempt such a thing. You are still recovering.”

“You said the purpose of the gift was not the object but the effort involved in the giving.”

“Did I do it right?” The earnestness in his eyes made her heart ache.

“Yes, yes, you did it very well. Thank you. I will cherish it always.”

“Good.” Dare opened his mouth to say something but turned away instead, staring out over the ocean. She could not begin to guess his thoughts. Without his greatcoat, he appeared thin and lonely in the pale light, leaning on his walking stick.

Clearly, he had not given up his attempt to convince her to marry him. She would never take advantage of the situation to accept an offer made only out of obligation, but what if his heart had been truly touched? He certainly had gone to great effort. Would he act the same way out of a sense of honor? Given what Emma knew of the enigmatic man before her, he probably would.

Though she was already standing next to him, she stepped closer. “I must insist you take back your coat. I do not wish you to catch cold in your condition. And truly, you should rest.”

“No, no, my condition is very well, thanks to you.”

“But that does not mean you should freeze. Here, take back your coat. I am very warm, I assure you.” She stepped forward and attempted to place the coat back around his shoulders.

“No, I insist you keep it,” he protested, trying to keep the coat around her. Somehow, they ended up with one shoulder of the coat on him and one on her, standing so close their bodies brushed against one another.

Emma froze at the contact, looking up at the dark eyes of the Earl of Darington. His eyes burned with a fierce intensity, his lips parted. His dark look was similar to when he had defended her from the highwaymen. This was the true Darington. He kept a calm, distant facade, but raging beneath the surface was something wild and dangerous. Her heart pounded, but instead of pulling away, she pressed closer.

He slowly wrapped his arms around her, inside of the greatcoat, pulling her closer to him. Her hands flew to his chest, but she did not push him away. Without a word, he slowly lowered his head. He stopped just inches away from her lips. She waited, the air between them crackling with anticipation. Was he going to kiss her? Was he going to come so close and not kiss her? Waiting was agony.

Swiftly, he put an end to the debate and claimed her mouth with his. His lips pressed against hers and he pulled her closer, parting her lips with his tongue and deepening the kiss. Emma reached up and wrapped her hands around his neck, holding on tightly as her heart soared. She had never experienced anything like the sensation of kissing Darington. It was like flying, though her feet never left the ground.

When they finally parted, they both took deep breaths. His great coat slid to the ground, forgotten. She was certainly more than warm now. When his hand slid away from her waist, she noticed that it trembled.

“Forgive me,” he murmured, turning to face the crashing waves once more, holding his hands rigidly behind his back.

Emma took several more breaths before attempting speech. “That was…” She had not the words to describe it.

“An imposition on your person,” finished Dare without turning to her.

“It was not?” He turned to her, a note of hope in his voice.

“No,” she replied firmly. “That was…quite remarkable.”

AMANDA FORESTER holds a PhD and worked for many years in academia before discovering that writing novels was decidedly more fun. Whether in the rugged Highlands of medieval Scotland or the decadent ballrooms of Regency England, her novels offer fast-paced adventures filled with wit, intrigue, and romance.  Amanda lives near Seattle, WA.

Enter to win a copy of If the Earl Only Knew, the first book in Amanda Forester’s Daring Marriages series!