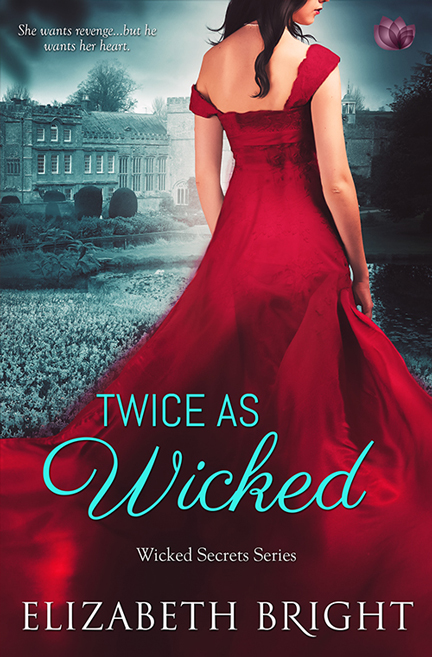 A guest post from Elizabeth Bright, author of TWICE AS WICKED.

Authors often get asked where we get our ideas from. Too often, the answer is we simply don’t know! Characters appear and scenes happen in ways that often surprise even the writer. Many writers fall somewhere within two groups: Plotters and pantsers. I’m in between. I do a very rough outline of the story, but I don’t plan scenes. Dialogue feeds off itself—I never know what my characters are going to say! Authors often get asked where we get our ideas from. Too often, the answer is we simply don’t know! Characters appear and scenes happen in ways that often surprise even the writer. Many writers fall somewhere within two groups: Plotters and pantsers. I’m in between. I do a very rough outline of the story, but I don’t plan scenes. Dialogue feeds off itself—I never know what my characters are going to say!

But there’s one scene in Twice as Wicked that I can say with absolute certainty where the inspiration came from, and that’s the Stone of Scone scene. I could never have written it if, twenty years ago, I hadn’t seen a Highlander: The Series episode about the famous Scottish stone. If Duncan Macleod of the Clan Macleod hadn’t been so cute, I probably wouldn’t have bothered to spend the next week buried in the library—and this was before internet!

In this scene, Alice and Nathaniel have already met, but they don’t entirely trust each other. Here’s the scene in Twice as Wicked:

“I come here, sometimes, to think,” he said as they entered the throne room.

“Do you?” The heels of her boots clicked pleasantly against the floor as they walked. “I have always wanted to see the Stone of Scone.”

“It is a good story,” he said, though admittedly, it did hit a bit close to home for his comfort.

He looked at her, startled. “Surely, you already know it?”

“I wish to hear it from you.” Her eyes did not move from his face. “We all have our own way of telling a story, do we not, Lord Abingdon? What you say, what you do not say, these things are more about you than about the story itself. That is what is interesting to me.”

He regarded her with narrowed eyes. “Miss Bursnell, I do believe you are a bluestocking!”

She laughed. “Perhaps I am, my lord.”

“Very well. I will tell you the story.” He paused, circling his thoughts. “Once upon a time, as the saying goes, two brothers were born to Isaac. They were born mere seconds apart, with the younger grasping the heel of the elder. The elder was called Esau, and the younger was Jacob. Esau, as the elder, was entitled to the birthright and blessing.”

He could feel her eyes on him, but he kept his own firmly on the throne before him.

“Esau did not value his birthright, and Jacob valued it, perhaps, too much,” Nathaniel continued. “Esau traded his birthright to Jacob for a bowl of beans. Jacob then tricked Isaac into giving him the blessing, as well, and Esau begged for a lesser blessing. And so things continued. Neither behaved well, and they tormented each other. Jacob was loved, and Esau was less loved. It made him bitter, and he attempted to murder his brother. Jacob escaped and fled. He stopped at night and lay down, taking a rock for a pillow. That night he had a vision from God, wherein He promised to bless him and his descendants.” Nathaniel paused and gestured to the coronation chair. “The rock he used for a pillow is the Stone of Scone.”

He arched an eyebrow. “Was my way of telling the tale interesting to you?” he teased.

“Oh, yes.” She twirled the tip of her umbrella against the marble floor. “If I had told the story, you would have heard how Edward the First brought the stone to Westminster Abbey as a spoil of war. I would have laid out all the theories. Is it the Stone of Scone that lies beneath the chair before us, or is it not? Where lies the true Stone, if not in King Edward’s Chair? Undoubtedly you would realize from my telling of the story that I enjoy a good mystery, and revel in the pursuit of solving a puzzle.”

A feeling of unease settled in his stomach.

“But you chose to tell me of Jacob and Esau. What, I wonder, is the significance of that story to you?” She regarded him carefully. “Do you have a brother, by any chance, Lord Abingdon?”

His teasing smirk was instantly replaced with a scowl. Fiend take it, she was a clever one!

“I do have a brother. Nicholas,” he said shortly. “My twin, in fact. I am the eldest by a mere twelve minutes. Further than that, I do not care to discuss him with you.”

For a split second, she appeared shocked. “Ah! I see.”

“No. You do not see.” He hoped to God his tone conveyed that the subject was closed. He must pay more attention and learn to imitate Wessex, if he continued to be around the lady. Wessex was a master of the haughty setdown.

She turned her head away, freeing him from her piercing gaze. “Very well. I do not see.”

But he was horribly afraid that she did see. That he had allowed her to see.

Neither behaved well, and they tormented each other, he had said. That was not Biblical. It was his own confession of guilt.

He was afraid she saw through to his very soul. Miss Alice Bursnell is determined to wreak revenge on Nathaniel Eastwood, Viscount Abingdon, for the seduction, ruin, and death of her beloved twin sister. But how to expose a seducer without falling prey herself? As she gets closer to Nathaniel, she finds she is in serious danger of following in her sister’s much-too-tempted footsteps. The man is nothing like the heartless rake she expected…and his kisses are truly divine. Could she be wrong about him?

When a mysterious and gorgeous woman confronts Nathaniel at a fancy ball, he suspects she has murder on her mind—his own. But the more he tries to determine who the deceptively innocent beauty is—and what she’s up to—the deeper he falls under her alluring spell. Nathaniel fears he’s in imminent danger of losing his life…or worse, his heart.

To read more about Elizabeth, check out her social media links: