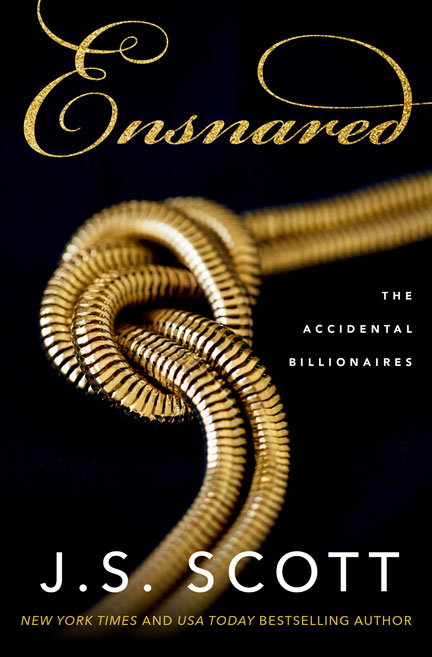 In J.S. Scott’s ENSNARED, wildlife conservationist Jade Sinclair isn’t used to having money. But when she and her siblings learned they were part of the mega-rich Sinclair dynasty, they became billionaires overnight. Jade doesn’t even know how to act rich, especially when she’s dealing with an arrogant, privileged, unreasonably sexy snob like Eli Stone.

Unlike Jade, Eli grew up rich, and he just keeps getting richer. Eli is always looking for an adventure, and he’s found an inviting one in Jade—as resistant as she is irresistible. His less-than-honorable plan? Get her alone in the wilderness by buying out all the spots in her survival class… Wildlife conservationist Jade Sinclair isn’t used to having money. But when she and her siblings learned they were part of the mega-rich Sinclair dynasty, they became billionaires overnight. Jade doesn’t even know how to act rich, especially when she’s dealing with an arrogant, privileged, unreasonably sexy snob like Eli Stone.

Unlike Jade, Eli grew up rich, and he just keeps getting richer. Eli is always looking for an adventure, and he’s found an inviting one in Jade—as resistant as she is irresistible. His less-than-honorable plan? Get her alone in the wilderness by buying out all the spots in her survival class.

Calling a truce, they strike a bargain: Jade will teach Eli basic survival skills, and he’ll teach her how to navigate the world of the wealthy elite. Jade has only one condition—she will not let herself be seduced by him. But some things are easier said than done…

“I’m not much of a socializer,” I said, feeling defeated. “And going to dinner in nice places alone isn’t all that much fun.”

“You could have gone with me,” he reminded me. “I’ve offered over and over again.”

“You don’t know me,” he argued. “And you have no reason to dislike me.”

I stared into the darkness for a few minutes, contemplating his statement.

He’d pretty much cleared up why he’d left me waiting in his office. He didn’t want to sell the land I wanted, but it wasn’t like he had to do anything he didn’t want to do. He said he had his reasons, and the acreage in the backcountry obviously had some deep meaning to him personally. And I could hardly fault him because he had extreme hobbies. It was his life. He had a right to do whatever he wanted.

“You’re right,” I finally muttered. “We don’t have much in common, but that’s no reason to dislike you.”

“Sometimes,” I confessed, the total darkness making me braver.

Because every time I see you, I get mesmerized. I want to crawl up your gorgeous body and ease the painful ache I have every time you’re near me.

“Because I don’t like losing control,” I finally answered. “I’m not the type of woman who makes any man drool. Brooke was always the more feminine one. I was a tomboy, remember?”

“Maybe you like being outdoors, but you’re gorgeous, Jade. You have a natural beauty that would knock some guys on their asses.”

“Especially me,” he confessed. “You’re so connected with nature and the wildlife you’re fighting to protect. I love the way you handle an axe, and I’m in awe that you can identify nearly any plant. It makes you pretty irresistible.”

I couldn’t help it. I laughed out loud. “Eli, there aren’t a whole lot of men who find a dirt-smudged woman with no makeup, and who chronically has bad-hair days, all that pretty.”

“Not another comment about how you look,” he growled.

I stayed quiet for a moment before I simply answered, “Okay. I’ll stop.” I smiled into the darkness and changed the subject. “So how did you get so comfortable with being a celebrity?”

“I’m not a celebrity,” he said. “I was born rich. So I pretty much grew up in a privileged world. But I never really wanted to be noticed. It just . . . happened.”

I rolled my eyes, even though he couldn’t see me. “Please. Every news organization loves to show you doing your extreme hobbies, or talk about how you’re one of the most eligible bachelors in the world. You’re not exactly what I’d call a low-profile billionaire.”

“Now I want to be noticed sometimes, especially when I’m raising funds for charity.”

I supposed getting attention for his causes was probably worth being in the public eye. “Do you like the publicity?”

“You probably won’t believe me, but I actually don’t. I’m a private kind of guy. But I’m willing to sacrifice some of my privacy for a good cause. Sometimes I have to keep the crazy going.”

It was an interesting way to refer to his insane hobbies and fund-raising.

He hesitated before he said, “You’ll get used to having money, Jade. It doesn’t change who you are, and once you start enjoying the benefits of being a billionaire, you just might find out it isn’t so bad.”

“I’d like to travel,” I mused. “And I do like raising money for my charity. I wouldn’t mind doing as much as I can for other fund-raisers.”

“I can teach you what billionaires can do for fun. And then I can show you how we can make a difference in the world. Give me some of your time, and I promise that I’ll make you feel differently about having money,” he said gruffly.

“By taking me to dinner in a nice place?” I asked curiously. There was something very appealing about having someone to show me the billionaire ropes, because I was clueless as to how I could become a good philanthropist.

“Among other things,” he answered. “Give me ten days, Jade. I can take that much time off. I might have emergencies come up, but I’ll otherwise be at your disposal. I can help you get used to being rich, and prove that it doesn’t change you.”

My heart tripped. I couldn’t imagine spending every single day with Eli for over a week. But I would be lying if I said I wasn’t tempted. Eli seemed to understand my fears about the money, and I could talk to him. “I have classes,” I argued.

“No, you don’t,” he replied smugly. “I bought them all out for the next month. I was hoping you’d agree to spend some time with me.”

“I know I had some people who wanted to sign up.”

“Classes were already booked. Those potential students got pushed to the following month.”

“How in the world did that happen? How did you manage to buy out all the classes?”

“I have a lot of friends in San Diego,” he answered. “And I was desperate.”

My schedule was put together by some of the rec centers who recommended my classes. So it irritated the hell out of me that somebody had just . . . fixed it for Eli.

There was part of me that was annoyed that he’d high-handedly stripped me of the ability to teach classes for a month, but there was a soft spot inside me because Eli was trying so damn hard.

And really, I didn’t have much desire to fight him. I wanted to get to know him. He did some great things for charity, and I wanted to be part of that. And I had the chance to work with a man who had grown up rich. If anybody knew the ins and outs of being a billionaire, he did. “Are you going to try to kiss me again?”

I wasn’t sure whether the thought terrified me, or if I was secretly glad.

Author Biography:  J.S. “Jan” Scott is the New York Times and USA Today bestselling author of numerous contemporary and paranormal romances, including The Sinclairs series. She’s an avid reader of all types of books and literature, but romance has always been her genre of choice—so she writes what she loves to read: stories that are almost always steamy, generally feature an alpha male, and have a happily ever after, because she just can’t seem to write them any other way! Jan loves to connect with readers. Visit her website at www.authorjsscott.com.