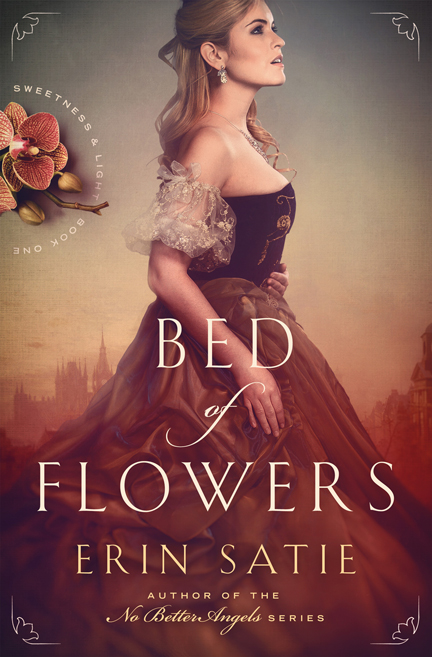 BED OF FLOWERS by Erin Satie.

Bonny Reed is beautiful, inside and out.

A loyal friend and loving daughter, she’s newly engaged to her small town’s most eligible bachelor. She’s happy for herself—but mostly for her family, who need the security her marriage will bring.

An old enemy shatters her illusions.

First Baron Loel cost Bonny’s family her fortune. Now he’s insisting that her fiancé has hidden flaws, secrets so dark that—if she believed him—she’d have to call off the wedding.

How will she choose? Beauty and the Beast: versions of the fairy tale by Erin Satie

I knew from the start that my new book, Bed of Flowers, would be a take on Beauty and the Beast. Certain elements of the fairy tale were really easy for me to adapt–the rose at the heart of the tale, for example. I found out there had been a mania for exotic orchids in mid-nineteenth century England. It even had a fun name: Orchidelirium. From there I was off to the races; I read about the cultural history or orchids, I read about cold-weather orchids and hot-weather orchids, the technical challenges of building greenhouses to suit each. I took all this research and asked, “What can I do with this real historical curiosity, involving real plants, that would feel as strange and magical as Beauty’s father plucking a full-blown rose from Beast’s garden, in the middle of winter?”

Others were harder. It didn’t occur to me until I was well into the story that, for example, in the Disney version of the fairy tale Beauty and Beast basically fall in love during a montage. Now, it’s a good montage. At least in the cartoon, where Beast has a sense of humor and brains himself with a gigantic snowball. In the live action version, Beast takes the gigantic snowball and… throws it right at Beauty’s face, knocking her flat on her back. (Which, seriously, is the most boggling difference between the cartoon and the live-action adaptation). So there’s some camaraderie on display… but it’s still a montage, and it lasts as long as a single song.

The montage works in the movies, but readers want a little more romance in a romance novel. There are lots of romances based on Beauty and the Beast and I think this is one reason why they’re all so different. No matter how many times you reproduce the scenario, each author is effectively inventing the romance from scratch.

I tried, as much as possible, to take inspiration from the early French versions written in the eighteenth century, both by women: Gabrielle-Suzanne Barbot de Villeneuve and later Jeanne-Marie Leprince de Beaumont. I read all sorts of theories about these stories and what they meant, though no matter which angle you take, at heart Beauty and the Beast is a story about getting married. A young woman leaves her father’s care and finds herself subject to a new master–a situation that many young women in arranged marriages could have identified with.

In Bed of Flowers, I wanted to echo the crisis of loyalty that Beauty experiences at climax of Beaumont’s version of the tale. In Beaumont’s version, Beauty is allowed to leave Beast’s castle and visit her family. He warns her not to stay too long but she’s so happy to be home. She loses track of time and Beast sickens in her absence. She eventually realizes her mistake and rushes back to the castle, where Beast is dying and her tears then restore him to his human form.

I wanted to make this moment real. I wanted my readers to really feel Beauty’s anguish as she chooses between love for her family and for her beloved. And so the whole plot of the novel leads up to circumstances that force my heroine, Bonny Reed, into a similar crisis. She loves her family–but she’s learned to love the hero, too. And she can’t make them both happy. So what will she do? Bed of Flowers by Erin Satie

Bonny Reed is beautiful, inside and out.

A loyal friend and loving daughter, she’s newly engaged to her small town’s most eligible bachelor. She’s happy for herself—but mostly for her family, who need the security her marriage will bring.

An old enemy shatters her illusions.

First Baron Loel cost Bonny’s family her fortune. Now he’s insisting that her fiancé has hidden flaws, secrets so dark that—if she believed him—she’d have to call off the wedding.

How will she choose?

When the truth comes out, Bonny will have to choose between doing what’s right and what’s easy. Between her family and her best friend. And hardest of all—between her honor and the love of a man who everyone wants her to hate.

Erin Satie is the author of the dark and elegant No Better Angels series of historical romances set in the early Victorian period. She’s currently hard at work on her new series, Sweetness and Light.

Erin is a California native who’s lived on the coasts and in the heartland, in tiny city apartments and on a working farm. She studied art history in both college and graduate school—research is always her favorite part of starting a new book.

Her favorite part of finishing a book, whether reading or writing, is the happily ever after.

Giveaway: enter to win 1 of 2 e-copies of any back catalog book by Erin Satie!