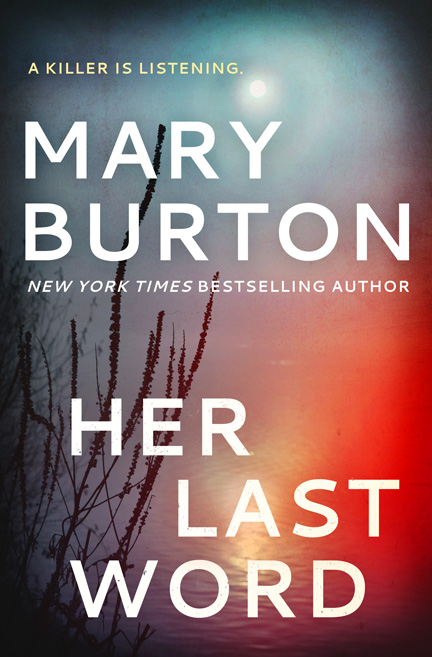 HER LAST WORD by Mary Burton, an exclusive excerpt! But when a woman Kaitlin questions is later found stabbed to death, she fears that she’s drawn a killer out of hiding. It’s Detective John Adler’s fear that the murders have only just begun. Now his job is to keep Kaitlin safe.

As a bond between Kaitlin and Adler builds, the past closes in just as fast—and it’s darker than Kaitlin remembers. Soon, her wish will come true. She’s going to find out exactly what happened to Gina. Someone has been dying to tell her.

Kaitlin grabbed her jacket and descended the stairs to her car parked in the lot. She drove up into Church Hill and found a spot a half block beyond Jennifer’s townhome.

She shoved her hands in her pockets and moved up the brick sidewalk toward the row house encircled by the yellow crime scene tape. As she stared up at it, Detective Adler strode out the front door. His expression was grim as he stripped off black latex gloves and came down the sidewalk toward her. She wasn’t the only one having a bad day.

“I went to see Randy Hayward,” she said.

“He called me out of the blue and asked to meet.”

“You gave him your number?”

Using a tactic from his playbook, she deflected his question. “He’s an important piece of the puzzle.”

“And he said he knows how to find Gina.” She held up her hand before he could voice the rebuttal glistening in his narrowed eyes. “I know, he’s a thief, liar, and con man. But he said Gina’s attacker had cut her ear off. That detail was never mentioned in the press. The cops told me not to tell anyone, and I didn’t. Hayward also knew the earrings she wore were borrowed from me. He gave them to me as a gift.”

Adler’s glare was unnerving. “How long has he been in jail?”

“One month. He couldn’t have killed Jennifer.”

“I know Gina wasn’t your case. But Hayward wants me to find someone whom he can deal with. I thought about you.”

He stared at her. “What does he want?”

“He wants to trade what he knows.”

“For a reduced sentence?”

“I suppose. He’s been in and out of the system for over a decade,” she said. “He knows how it works.”

“I’m not in a position to make a deal with him,” Adler said.

She wasn’t going to let Adler off that easy. “But you know who can?”

“Yes.” He tightened the fingers around the latex gloves. “It’s a hell of a long shot.”

“Isn’t it worth pursuing? Gina vanished in your jurisdiction, and there’s no statute of limitations on murder.”

“Assuming Gina is dead,” he said.

She cocked her head. “You think she’s alive?”

The flap of yellow crime scene tape caught her attention, and a glance past him reminded her how brutal Gina’s death had probably been.

Saying nothing, he opened his phone and held it up to her. It was a picture of her with Gina, Jennifer, and Erika. Her chest tightened, making it hard to breathe.

“When was this taken?” he asked.

“Gina is wearing the green dress, and I have on that white top. It’s what we both wore that night. Where did you get this? I’ve never seen it before.”

“It was in Jennifer’s photo album.”

“Ashley snapped several pictures of us when she dropped Jennifer off.” Feeling suddenly unsteady, she handed back his phone and fished in her backpack for the disc of Jennifer’s interview. She wasn’t planning on giving him every interview she’d done just yet because she didn’t fully trust him, but she needed his help with Randy. Give a little to get a little. “This is the interview I did with Jennifer.”

He tapped the disc against his hand. “Let me make some calls about Hayward. I won’t jump too quickly, because I don’t want him thinking he’s in control. He’s not.”

Urgency churned in her belly. “He really might know something about Gina, and maybe Jennifer.”

“Okay, I’ll make some calls. He’s kept his secret fourteen years. He can keep it a little longer.”

“Any idea who killed Jennifer?”

She nodded toward the security camera mounted on the house across the street. “There are cameras everywhere here. One of them must have captured something.”

The crooked smile again tugged the edge of his mouth. “I’ve done this before.”

“Right, sure.” She tightened the grip on the strap of her backpack. “Jennifer’s mother died about five years ago. And her father died when she was a kid. It was just Ashley and Jennifer.”

“When it comes to the girls by the river I do.” She shook her head. “Have you requested Gina’s missing person file?”

She chose her next words carefully. “Be warned, it paints me in a bad light. I’m a different person than I was then. I made terrible mistakes. I can’t make them right, but I can help bring Gina home.”

“Your name does have a tendency to come up.”

“Yeah, I talked to him last week. He wasn’t helpful. He remembered me and was more interested in making cracks about my high school days. I was as infamous at Saint Mathew’s as Gina was famous.”

He ran his hand down his red silk tie. “Why did Jennifer leave the river early that night?”

“She was hammered. She could barely stand up.”

“Where did she live?”

“About a half mile from Pony Pasture, not far from Gina. Knew the area like the back of her hand.”

“Did she see anything? Did she have any new information for you?”

“Ashley, her sister, picked her up.”

“So Ashley was also there?”

“Ashley dropped her sister off and then later returned to get her. I remember the Ralston family car pulling up. Jennifer said she didn’t remember anything after getting in the car.”

“And you saw Ashley?”

“I assumed it was Ashley.” She frowned. “I can’t say for sure, but Jennifer confirmed it was her sister when I interviewed her.”

“Have you spoken to Ashley since you returned? Did you interview her?”

He studied her. “Does this tape include all your interviews?”

Honesty was her new policy thanks to AA. She didn’t like it. Old habits died hard. “Because you’re a cop. And I don’t trust cops.”

“Go back and read the case files. Watch my interviews with Detective North. He pretended to be on my side. And then he leaked my name to the press and denied it because I was a minor. My life turned to shit after that.”

“He was certain I knew more than I did. He thought the media would tear the truth out of me.”

“Can’t get blood out of a turnip.”

Adler seemed to weigh and measure all her answers. He didn’t trust her either. Smart man. “I would have done the same thing.”

“When you work out something with Hayward, let me know.”

“Detective Adler, you strike me as the kind of guy who moves fast.”

Not rising to the bait, he asked, “Hayward will get a visit from me before any deal is proposed. Where are you parked?”

The words were polite, but his tone made it clear he wasn’t asking but telling. Though she bristled, she fought the urge to argue. He’d said he’d look into it. And, despite her better judgment, she believed him. Acceptance allowed her to ease her white-knuckle grip on control.

He slowed his pace as he walked her to her car. The afternoon air was soft, and a delicate breeze from the river rustled the budding branches. It could have been a moment easily enjoyed if only they weren’t a half block from a murder scene, he weren’t a cop, and she weren’t paranoid.

He waited as she opened the door to her car and slid into the seat. She closed the door and quickly turned on the engine while rolling her window down.

“Whoever did this to Jennifer could be watching,” he said, leaning close to her so only she could hear.

“Why would anyone be watching? She’s dead.”

“He was keeping tabs on her.”

“She had a stalker?”

“Maybe. This kind of guy gets his rocks off not only following his victim, but also monitoring the cops during an investigation. I suggest you be careful.”

She’d spent the last fourteen years being careful because she feared the unseen. And she was damn tired of hiding. “I’ll keep it in mind. But I’m making my podcast. I need to make it, now more than ever.”

She didn’t answer right away. “You really want to know?”

“Whatever happened to Gina sent ripples through so many families. None of us—Jennifer, Erika, or me, our families and friends—were ever the same after she vanished. Time doesn’t heal all wounds.”

“That’s your only motivation?”

“You think I’m holding back?”

“I don’t see the other interview tapes.”

“When you get Gina’s case file, can I read it?”

He shook his head, no hints of apology in his expression. “You’re on the wrong side of the blue line.”

He patted the top of her car. “In the meantime, suspend your podcast interviews until I can figure out what or if anything links Jennifer’s murder to Gina’s disappearance.”

Smiling, she shook her head. She wasn’t stopping, and if anything she was more motivated than ever to find Gina. “I’ll take it under consideration, Detective.”