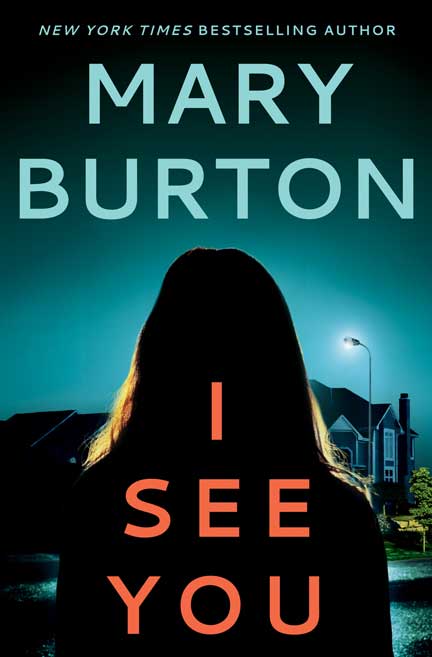 FBI special agent Zoe Spencer uses skeletal remains to recreate the faces of murder victims through sculpture. Though highly scientific, the process is also sensitive and intimate; she becomes attached to the individuals she identifies, desperate to find justice for each.

As Zoe examines old remains, she sees a teenage girl looking back at her—the victim in a cold case from over a decade ago. Zoe wants nothing more than to tell this young woman’s story and to bring her killer to justice. Title: I See You

FBI special agent Zoe Spencer uses skeletal remains to recreate the faces of murder victims through sculpture. Though highly scientific, the process is also sensitive and intimate; she becomes attached to the individuals she identifies, desperate to find justice for each.

As Zoe examines old remains, she sees a teenage girl looking back at her—the victim in a cold case from over a decade ago. Zoe wants nothing more than to tell this young woman’s story and to bring her killer to justice.

Zoe’s case leads her to the victim’s hometown and to homicide detective William Vaughan, Zoe’s on-again, off-again lover. As the two become more involved in the case, they quickly realize that it isn’t as cold as they first believed: someone’s still out there hunting women. And with more women gone missing, time’s running out. Can they work together and stop this madman before he kills again?

Zoe was not surprised that Vaughan’s home was modest. Cops in the Northern Virginia real estate market did not have many options, and she imagined he counted himself lucky that he was inside the beltway.

As he pulled into the driveway, security lights mounted on the side and front of the house clicked on. The one-story brick house was located on a cul-de-sac that was ringed by a half dozen larger homes more recently built.

There was no garage, and the closely cut grass had browned and bristled in the August heat. No flowers in the edged beds or extrafussy accoutrements such as flags or garden statues women tended to like. But there was a wooden fort built in one large tree, and judging by the graying wood and weathered rope ladder, it had been there at least a decade.

As she stepped out of the car, her general assessment of the Vaughan home was that it was normal.

He pressed several buttons on the keypad mounted by the front door, and it opened. A sensor inside the house triggered interior lights, and a security alarm pinged as he punched in the code.

Okay, maybe Vaughan’s emphasis on security was not exactly run of the mill. But once anyone saw what a homicide detective witnessed, they understood monsters did not just inhabit fairy tales.

The interior setup was very masculine. Large overstuffed couch, twin recliners, and a massive television mounted over a fireplace that looked unused. The pictures on the walls were themed around his son or sports. The place was clean and neat.

“Can I get you something to drink?” he asked. “I have bourbon.”

He opened a kitchen cabinet and removed a half-full bottle of bourbon and poured two fingers in everyday glasses. As he handed her a glass, her fingers barely brushed his. It was a light touch, scarcely noticeable, but it sent a thrill through her. It had been a while since they had been together, and she hungered for what was coming.

She took a sip, impressed. “Nice.”

“Glad you like it.” His gaze studied her over the rim of his glass before he downed it in an uncharacteristic show of impatience.

She finished the last of her drink and set the glass down beside his. “You going to give me the grand tour or take me straight to the bedroom?”

He loosened his tie. “Do you want the grand tour?”

“How about a rain check on that?” It surprised her how much her impatience had seeped into her tone.

Vaughan took her by the hand and led her down the central hallway peppered with more pictures of Vaughan and his son.

The bed in the master room was a king with two pillows and a neatly made blue comforter. Twin nightstands had lamps, but the table closest to the door was piled high with books on history, mathematics, and politics. Topping the stack of books was a pair of dark-rimmed glasses.

“There’s a bathroom in there if you need it,” he said.

She removed her weapon and holster from her waistband and set them both on a dresser outfitted with a large mirror that caught the bed’s reflection.

She shrugged off her jacket and laid it beside her weapon and kicked off her shoes. As she unbuttoned her blouse, she caught Vaughan’s reflection in the mirror. He had removed his badge and gun but was watching her closely as he unfastened his shirt buttons.

She slid off her shirt and then her pants. When she faced him in just her bra and panties, he was reaching for his belt buckle as his eyes roved over her.

She crossed the room and pushed his hands aside, taking the smooth metal buckle in her fingers. She was careful not to touch him as she studied his face.

“You are always studying my every expression. And I know you’ve analyzed my home.”

“It’s what I do. I study people.” She unhooked the top button of his trousers.

His jaw pulsed. “Do you ever see people as people?”

He traced his finger over her bare shoulder. “There’s no emotion, then, when we do this?” New York Times and USA Today bestselling novelist Mary Burton is the popular author of thirty-five romance and suspense novels as well as five novellas. She currently lives in Virginia with her husband and three miniature dachshunds. Visit her at www.maryburton.com.