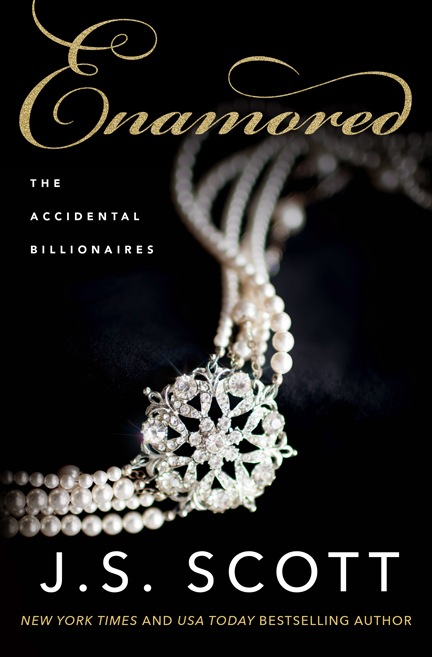 Read on for an exclusive excerpt from J.S. Scott’s ENAMORED.

Like his brothers and sisters, Seth Sinclair went from blue-collar to billionaire overnight, and he’s decided to invest in what he knows best: construction. There’s only one thing in his way—the endangered birds nesting on a piece of prime beachfront real estate. And fighting for the birds is Riley Montgomery, a stubborn, pain-in-the-ass, drop-dead-gorgeous environmental lawyer. The worst part? Seth will do anything to keep her around—even if it means hiring her to be his fake girlfriend…

Eli and Jade spent a lot of time in San Diego, and I generally didn’t see them around their house next door until the weekend.

She laughed as she walked in the door. “Weird, right? It’s strange to be here on a Monday. But Eli wanted to stay to go over some stuff with Seth. And the research facility can function without me once in a while. I have plenty of competent scientists there to carry on in my absence.”

I cringed a little inside as I asked cautiously, “Eli isn’t planning to confront Seth about the bird sanctuary, right?”

I really, really wanted to avoid family conflict for them. It was obvious that Seth adored Jade.

She shook her head as she plopped down at the table near the sliding-glass doors. “No. Not since you told me that Seth made you an offer. I’m dying to find out if the terms can be worked out.”

I’d been stewing about Seth’s proposition for days. I’d just texted Jade last night about the possibility of working out a deal with her brother. But I hadn’t counted on her showing up today to discuss it.

I went into the kitchen and started making some tea. “Do you want coffee or anything?”

Jade held up her hand. “No. I’m good. Eli already took me to Maya’s Bistro this morning for one of Skye’s amazing croissant breakfast sandwiches. I had tons of coffee.”

I knew Jade’s sister-in-law, Aiden’s wife, had done a complete overhaul on her café. I’d been wanting to get in there since it reopened right at the end of the summer. “How’s business for her?”

Jade beamed. “Excellent. It’s so adorable now that it’s been completely remodeled, and the food is nice and trendy. But delicious. I can only imagine what a success it will be in the summer.”

“I’m glad,” I answered sincerely as I added cream and sugar to my tea. “I’d love to get there soon.”

She nodded. “You should. Her sandwiches are all a work of art.”

I took a seat across from her at the table. “Okay, so about Seth’s proposed deal… ”

“Tell me. Can we save the property?” she asked breathlessly.

I shot her a small smile. Jade was so passionate about preserving species. Her cutting-edge work in her laboratories with DNA was way above my head, but her vision was always very clear. “We can. But the deal is pretty … unconventional.”

“What does he want?” Jade asked.

“Me,” I answered flatly.

Jade’s eyes became round and befuddled. “I don’t understand.”

I sighed. “I don’t exactly understand it well myself. But according to your brother, if he’s losing millions on this property, he wants to find more big investors, and wheel and deal for other potential real estate to build the resort on. Which means he has to mingle with some of the San Diego elite. He’s had plenty of invitations to exclusive parties and fund-raisers, but he put a halt to attending them once he realized that he was getting mobbed by ambitious women or their mothers. He wants me to accompany him for a few months as his fake girlfriend. It would give him more opportunity to talk with some potential investors and real-estate moguls.”

I nodded. “He was completely serious.”

“Oh, Riley,” she said softly. “That puts you in a pretty uncomfortable situation, doesn’t it? There’s a good chance you’ll end up face-to-face with your ex-fiancé, right?”

Yep, there is, and Jade doesn’t know all the reasons why I want to stay out of that crowd, either.

I took a sip of my tea before I answered, “It would be awkward. But if it makes you feel any better, I don’t think Seth realizes it. I’ve been trying to figure out a way to refuse him all morning, but I just can’t, Jade. It’s too important to keep that property intact for me to just throw the opportunity to do that away. And honestly, your brother would be giving away millions for just a couple of months of my time.”

She tilted her head. “You like him,” she accused.

I rolled my eyes. “I think ‘like’ is a little too strong a word. He’s tolerable when he isn’t being a jerk.”

Admittedly, he had been pretty pleasant when we’d met several days ago in the Coffee Shack. Until he’d dropped that damn bomb on me about masquerading as his girlfriend.

“Seth is actually a pretty nice guy, and I’m not just saying that because he’s my brother,” Jade said. “Maybe he has been a lot more guarded since he went to work in the corporate world, but he’s done some things for my whole family that none of us could ever repay. He would always go without just to give Owen, Brooke, and me something as simple as an ice cream or some kind of treat. And I don’t think there was a single day that he resented it. All he ever wanted was to see us smile. He started working in construction when he was sixteen just to help Noah. And then Aiden started to work as a fisherman as soon as he was old enough to work. None of my brothers ever wanted us to feel deprived. They gave us all a childhood when they’d actually not had one themselves.”

I had no idea why her words made me blink back tears.

Or maybe I did know, but I didn’t want to reconcile the “business” Seth with the man who had always put his family first.

“You have an amazing family,” I said reverently. Like his brothers and sisters, Seth Sinclair went from blue-collar to billionaire overnight, and he’s decided to invest in what he knows best: construction. There’s only one thing in his way—the endangered birds nesting on a piece of prime beachfront real estate. And fighting for the birds is Riley Montgomery, a stubborn, pain-in-the-ass, drop-dead-gorgeous environmental lawyer. The worst part? Seth will do anything to keep her around—even if it means hiring her to be his fake girlfriend.

With a cause to fight  for, Riley agrees to Seth’s scheme. If she keeps the superficial women away from Seth, then he’ll leave the wildlife sanctuary alone. But pretending to be his girlfriend comes with ground rules: No ass grabbing. And absolutely no sex. Ever. The problem? The sexual tension sizzles when they’re together.

Seth isn’t so keen on Riley’s rules, but he’ll keep his word, at least until she decides otherwise. But bringing Riley into his circle has brought her past back to haunt her in ways that neither of them expected. Now it’s less about broken rules and more about broken hearts, and Seth will do whatever it takes to protect the woman he loves. J.S. “Jan” Scott is the New York Times and USA Today bestselling author of numerous contemporary and paranormal romances, including the Sinclairs and the Accidental Billionaires series. She’s an avid reader of all types of books and literature, but romance has always been her genre of choice—so she writes what she loves to read: stories that are almost always steamy, generally feature an alpha male, and have a happily ever after, because she just can’t seem to write them any other way! Jan loves to connect with readers. Visit her website at www.authorjsscott.com.