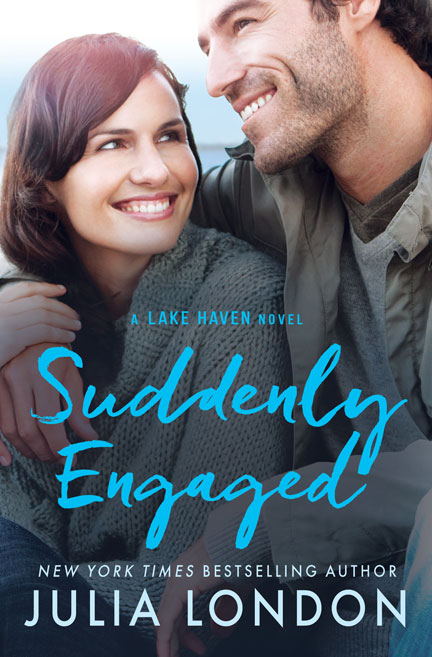 Single mother Kyra Kokinos spends her days waiting tables, her nights working on her real estate license, and every spare moment with her precocious six-year-old daughter, Ruby—especially when Ruby won’t stop pestering their grumpy next-door neighbor. At first glance, Dax Bishop seems like the kind of gruff, solitary guy who’d be unlikely to offer a cup of sugar, let alone a marriage proposal. But that’s exactly what happens when Ruby needs life-saving surgery. Single mother Kyra Kokinos spends her days waiting tables, her nights working on her real estate license, and every spare moment with her precocious six-year-old daughter, Ruby—especially when Ruby won’t stop pestering their grumpy next-door neighbor. At first glance, Dax Bishop seems like the kind of gruff, solitary guy who’d be unlikely to offer a cup of sugar, let alone a marriage proposal. But that’s exactly what happens when Ruby needs life-saving surgery.

Dax showed up in East Beach a year ago, fresh from a painful divorce and looking for a place where he could make furniture and avoid people. Suddenly his life is invaded by an inquisitive munchkin in sparkly cowboy boots—and her frazzled, too-tempting mother. So he presents a practical plan: his insurance will help Ruby, and then they can divorce—zero strings attached.

But soon Kyra and Dax find their engagement of convenience is simple in name only. As their attraction deepens, a figure from the past reappears, offering a way out. Can Kyra and Dax let go so easily—or has love become a preexisting condition?

“Is there something you need?” Kyra asked him, watching him like she expected him to announce something terribly important. Dax held up the door hinge. She looked at it. She squinted. “Okay, I give—what is it?”

“Oh-kay,” she said slowly, clearly not getting the genius of it.

“I’m going to install it on your screen door.”

“Mommy, I think my bath toys are still in the car!” Ruby cried and darted past her mother, pushing the screen door open and forcing Dax backward as she raced to get them. The screen door slammed behind her.

“Already done,” he said, and without thinking, his gaze flicked to her legs, then quickly back up.

“I’m kind of in the middle of something,” she said apologetically.

The car door slammed. “They’re not in there!” Ruby shouted and raced back up the steps, yanking the screen door open and jumping inside. The door banged shut again. “Where are they, Mommy?”

“She doesn’t need to go to so much trouble,” Dax said gruffly. “I’m not that interested. I just want to fix this door.”

Mrs. Coconuts—Kyra—smiled a little lopsidedly. “I’m not that interested in them, either, for what it’s worth. But there is nothing I can do to stop her. She’s going to show you.”

Somehow, Dax knew that. And sure enough, Ruby reappeared with a Walmart sack. She promptly turned it upside down, and out tumbled the contents. Three bath toys attached to cardboard with plastic ties—a pirate, an alligator, a scuba diver. They had nothing to do with each other that Dax could see, and yet there they were, bound to the same thick piece of cardboard.

Ruby went down on her knees and tried to rip the ties open. She was mangling the toys. “Here,” he said impatiently. “Give it to me.”

She handed the package up to him, and Dax pulled a pocketknife from his pants to cut the plastic ties. Ruby tried to help.

“Dax,” he said. “Call me Dax. Otherwise I sound like a principal.”

“Who would have guessed?” he said and freed the alligator. He handed it to her. Ruby turned to one side and held it out, squeezing it. “There’s no water in it,” he pointed out. This kid was missing a spark plug in the old ignition switch. She didn’t seem to hear him at all, but went down on her knees, her attention on the alligator, squeezing it.

Dax glanced at her mother. She shrugged again. He freed the other characters and held up the hinge. “So?”

She considered that. “You’re not going to get mad if you can’t get it to work and throw your drill or anything, right?”

He stared at her, mystified. “Who would ever throw a drill?”

She smiled. “You’d be surprised. Okay,” she said, gesturing to the door. “Have at it.”

She walked back into the kitchen and sat down with one foot tucked up under her. At Dax’s feet, Ruby was still studying the bath toys.

“Okay, Ruby Coconuts, you’re going to have to move,” he said, stepping around her.

He nudged her with his foot, and she started. She looked up, blinking at him. “They all squirt water.”

He took the door off its hinges and began to install the new hinge. It was mindless, easy work, which enabled him to steal glimpses of Mrs. Coconuts at the table. Well—glimpses of her legs, at any rate. He hadn’t realized he was such a leg man until the Coconuts moved in next door, but when presented with the evidence, he certainly was. Now he was trying very hard not to imagine them wrapped around him.

She glanced up and caught him looking at her. Dax felt his face heat. Born in Canyon, Texas, and raised on a ranch, Julia London didn’t have her eye on writing romance right away. After graduating with a degree in political science from the University of Texas in Austin, she moved out to Washington, DC, eventually working in the White House. She later decided to take a break from government work and start writing. Today, she is the New York Times, Publishers Weekly, and USA Today bestselling author of more than thirty novels. She writes historical romance and contemporary women’s fiction, and her most popular series include the Secrets of Hadley Green series, the Cabot Sisters series, the Desperate Debutantes series, the Lear Sisters series, and the Pine River series. She is a recipient of the RT Book Reviews Best Regency Historical Romance award for The Dangerous Gentleman, and a six-time finalist for the renowned RITA Award for excellence in romantic fiction. She resides in Austin, Texas.