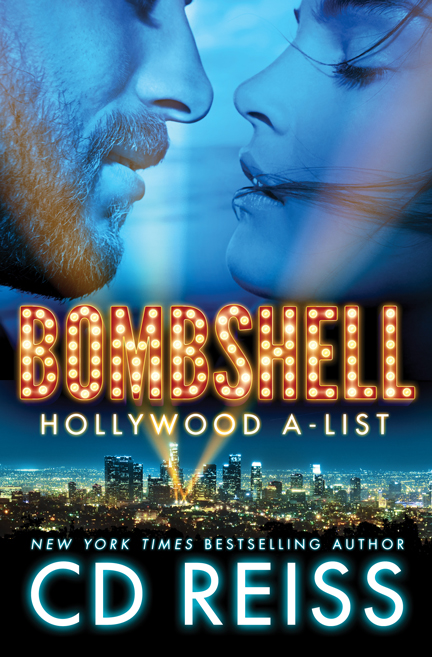 Exclusive excerpt from BOMBSHELL by CD Reiss.  Hollywood bad boy Brad Sinclair always gets his way, whether it’s the role he wants or the bikini-clad model he has to have. But when a bombshell gets dropped in his lap in the form of a dimpled five-year-old from a forgotten relationship, he knows his life is about to change forever. Hollywood bad boy Brad Sinclair always gets his way, whether it’s the role he wants or the bikini-clad model he has to have. But when a bombshell gets dropped in his lap in the form of a dimpled five-year-old from a forgotten relationship, he knows his life is about to change forever.

Cara DuMont isn’t exactly thrilled when she gets assigned to be the nanny for the latest box-office king. She has one rule: no celebrity fathers, especially single ones with devilish good looks and rock-hard abs.

But as soon as Cara meets Brad and his adorable little girl, she knows she’s in for a world of trouble. Because there’s something about the way Brad looks at her that makes her believe that some rules are meant to be broken…

“Whoa, whoa!” A male voice echoed above the din. “Can we all chill out for a second?”

Everyone froze except the child, who was upset past obedience.

In the doorway stood my agent, Laura, and Brad Sinclair. But honestly, Laura was a footnote to his presence. We all were.

I was used to celebrities and actors. Star power had no effect on me anymore.

But he was different.

Burgundy button-down and jeans. Blue eyes and brown hair that needed a brush. Six-two-ish. A jawline that may or may not have been geometrically possible. Sure. Those were all words that described what I saw, and I could have come up with a hundred more the next day.

But at that moment, with his shoulders filling the doorframe and Laura behind him, clutching a folder, he wasn’t just a collection of perfectly fine features. He was action and motion. He projected himself outward, emanating heat. My ears turned red. Half a second turned to minutes. He was the hurricane and the eye of it. A constellation of angles and planes that curled around the world and complemented it.

Get a hold of yourself.

He was just stunning. One of a thousand like him.

Fine. You could count the number of men that gorgeous on one finger.

“Mr. Sinclair,” I said, giving him my most authoritative tone. “There’s no way out of here besides that door. I’m not going to take her. Just let me clean her up and bring her back.”

I had to shout over the nonstop loop of the girl’s screams. “My name is Cara DuMont. I was nanny to Ray Heywood’s kids.”

He knew Ray. Everyone knew Ray. Brad looked me up and down as if taking stock of my soul. I continued. “I’m not here for the job. But she’s upset. I’m fingerprinted and background checked, and I’m not afraid of a little poop on the floor.”

Brad looked at his daughter, the guys in the dark shirts, Laura, and then me, eye to eye. A man who projected star power like a lighthouse, but for the moment he was just a guy totally out of his depth.

“Okay. Thank you.” I reached for the child, and she fell into my arms. The screaming slowed as soon as I bore the full weight of her, and stopped completely when she was on a clean part of the floor.

I addressed my agent. “Can you grab some underpants and have housekeeping bring some towels?”

She nodded. The security detail backed out, and Brad Sinclair gave me one look, one burning look that took the breath out of me before I closed the bathroom door and kneeled down to face his daughter.

“Do you want to start over?” I asked the girl.

“Nicole Garcia.” She sniffed and wiped her nose on her sleeve. “Nice to meet you, Nicole. Wanna help clean this up?”

I liked this little one. Good thing I already had a job lined up or I could have fallen for her and her dad in a heartbeat. CD Reiss shot up the New York Times bestseller list with sizzling works like Hardball and Shuttergirl, but she still has to chop wood and carry water, which was buried in the fine print. Her lawyer is working it out with God, but in the meantime, if you call and she doesn’t answer, she’s at the well hauling buckets.

Born in New York City, Reiss moved to Hollywood to get her master’s degree in screenwriting from the University of Southern California. Unfortunately, her screenwriting went nowhere, but it did give her enough confidence to write novels.

Today she’s adoringly referred to as the “Shakespeare of Smut,” which she thinks is flattering, but it hasn’t gotten her out of chopping a single piece of wood.