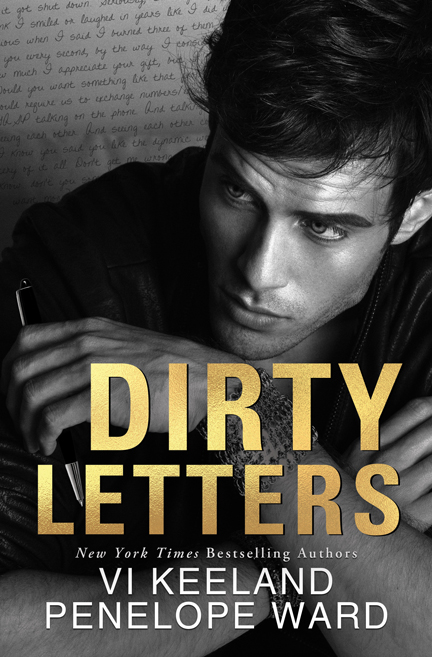 DIRTY LETTERS.  She had yet to meet him but had never forgotten the British boy who’d warmed her heart.

As childhood pen pals, Griffin Quinn and Luca Vinetti couldn’t have been more different. Over the years, through hundreds of letters, they became best friends, sharing their deepest, darkest secrets.

Until one day it ended.

Griffin never understood why Luca disappeared. She was special. She knew the real him like no one else. He writes her a drunken letter, an angry one, never expecting her to write back.

Before they know it, they’re right where they left off. This time with heat.

But as playing catch-up goes from fun to flirty to downright dirty, Luca wants more. She wants Griffin in the flesh. That’s where it gets risky. Because when they meet, the mystery will be over. And once they really get to know each other, there’ll be no going back.

Your newest release is Dirty Letters. Tell us a bit about it.

Two childhood pen pals are reunited when Griffin has a bit too much to drink one night and writes to Luca, the girl who suddenly stopped writing him eight years earlier. When he realizes why she stopped writing, they rekindle their relationship from afar and resume writing back and forth, this time as adults. Of course, now their letters are a bit steamier. Things get complicated when Luca suggests they meet in person.

How much of your personal lives are used in your books?

Vi: I use lots of little things! Often my husband’s sarcasm finds its way into books. And some of my sister’s old dating stories. Many of my fears often show in my heroines. I often suffer from anxiety similar to Luca.

Penelope: Very little. As the parent of a special needs child who requires a lot of assistance, my home life is often much different from the fantasy worlds I create. I started writing as an escape and thus my stories tend to be complete deviations from my real life. (Aside from the few autistic side characters I have incorporated into my books.)

Vi: I actually had a penpal when I was in grade school, a lot like Luca. So did my kids!

Penelope: Thinking back to childhood and the letters my friends and I would write back before there wasn’t any internet certainly inspired parts of the book. Also, music from groups like ABBA, inspired other parts.

Which scene in Dirty Letters do you find most romantic?

Vi: I think the most romantic scene is when Griffin stops the car and gets out and has an intense conversation with Luca. I loved his response when she tried to break things off. It’s not classically romantic, but his refusal to take no for an answer had me swooning even though I’d wrote it!

Penelope: Probably the scene where they meet for the first time. So many emotions have built up by the time that the characters finally meet. But there are several more romantic scenes later in the book as they struggle to make their long distance relationship work.

With two of you sharing the workload while creating a story, how do split up the writing?

Vi:  We take turns writing and try to hit between 3,000 and 3,500 words with each pass. We don’t divide up the story by chapter or character, instead, we pass the manuscript at various places. Sometimes that’s mid chapter.

Penelope: We pass the manuscript back and forth like a ball, each taking turns with the story and writing an equivalent amount of words each pass.

What can fans expect next?

We are co-writing another standalone romance for Montlake romance that will release in November 2020. A certain type of “letter” will also have important meaning in that book, although the story couldn’t be more different than this one.

The small dining room table had a pile of mail. I’d had Dad’s mail forwarded to my house, so mostly it was just catalogs and junk. Once a month, Mrs. Cascio sent me everything that arrived, even though I’d told her it wasn’t necessary. I mindlessly fingered through the pile, not expecting to see anything worth keeping. But I stopped at an envelope addressed to me—well, not me, but Luca Ryan. That was a name I hadn’t heard in a long time. In second grade, my teacher, Mrs. Ryan, started a pen pal writing program with a small town in England. We weren’t allowed to use our real last names for safety reasons, so the entire class used her last name—hence I was Luca Ryan. I checked out the return address for the sender’s name.

Wow, really? It couldn’t be.

I squinted at the postmark. It was from a PO box in California, not England, but I didn’t know any other Quinn other than Griffin. And the handwriting did look pretty familiar. But it had been close to eight years since we’d exchanged letters. Why would he write now? Curious, I ripped it open and scanned right to the bottom of the letter for the name. Sure enough, it was from Griffin. I started at the beginning.

Do you like scotch? I remember you said you didn’t like the taste of beer. But we never did get around to comparing our taste in hard liquor. Why is that, you might ask? Let me remind you—because you stopped answering my letters eight damn years ago. I wanted to let you know, I’m still pissed off about that. My mum used to say I hold grudges. But I prefer to think of it as I remember the facts. And the fact of the matter is, you suck. There, I’ve said it. I’ve been holding that shit in for a long time. Don’t get me wrong—I’m not obsessive or anything. I don’t sit in my house thinking about you all day long. In fact, there have been months that go by when thoughts of you don’t even enter my brain. But then some random thing will pop into my head out of the blue. Like I’ll see some kid in a pram eating black licorice, and I’ll think of you. Side note—I’ve tried it again as an adult, and I still think it tastes like the bottom of my shoe, so perhaps it’s that you just have no taste. You probably don’t even like scotch. Anyway, I’m sure this letter won’t find its way to you. Or if by some miracle it does, you won’t answer. But if you’re reading this, you should know two things.

What in the hell? Vi Keeland is a #1 New York Times, #1 Wall Street Journal, and USA Today bestselling author. With millions of books sold, her titles have appeared on more than one hundred bestseller lists and are currently translated into twenty-six languages. She resides in New York with her husband and their three children, where she is living out her own happily ever after with the boy she met at age six.

Penelope Ward is a New York Times, USA Today, and #1 Wall Street Journal bestselling author of more than twenty novels. A former television news anchor, Penelope has sold more than two million books and has appeared on the New York Times bestseller list twenty-one times. She resides in Rhode Island with her husband, son, and beautiful daughter with autism.

Together, Vi and Penelope are the authors of Dirty Letters, Hate Notes, and the Rush Series. For more information about them, visit www.vikeeland.com and www.penelopewardauthor.com.