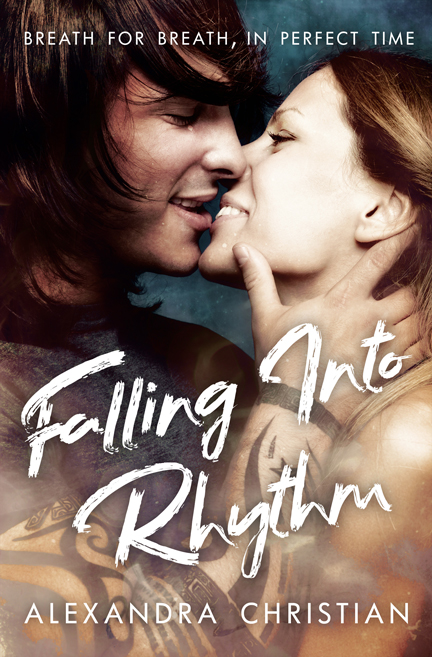 Escape to Crawford’s Landing with a new series from Alexandra Christian!

Hearts beat together, breath for breath in perfect time.

Jude Renfro came to the small island town of Crawford’s Landing looking to start over. The bright lights of the LA music scene don’t shine as brightly after losing your greatest love. All he wanted was to fix up his rustic old house on the beach and start a quiet, happy life out of the spotlight for his five-year-old son, Kit. A new romance wasn’t in the cards. The last thing he expected was a sassy kindergarten teacher and a fall carnival to change his life forever…

Hearts beat together, breath for breath in perfect time.

Jude Renfro came to the small island town of Crawford’s Landing looking to start over. The bright lights of the LA music scene don’t shine as brightly after losing your greatest love. All he wanted was to fix up his rustic old house on the beach and start a quiet, happy life out of the spotlight for his five-year-old son, Kit. A new romance wasn’t in the cards. The last thing he expected was a sassy kindergarten teacher and a fall carnival to change his life forever.

You and I are fallin’ into rhythm. One more kiss and you’ll be mine.

Harper Winslow is not exactly the stereotypical old maid schoolmarm, but she’s never managed to find Mr. Right. Her greatest love has always been the students she teaches at Sojourner Truth Elementary. That is, until her rock star idol, Jude Renfro, and his adorable little boy waltzes into her life. His bad boy swagger and soul of a poet has her mind and body reeling. She doesn’t have time to fall in love, though. The school is on the edge of financial ruin and the whole town is depending on her and the annual Fall Crawl carnival.

Together, Harper and Jude are a perfect duet, but will it be enough for a happily ever after?

Falling Into Rhythm is a small town, second-chance romance for anyone who loves seasonal, Hallmark-style love stories.

“Looking for me?” Jude whispered from behind her.

She turned around, and he grabbed her around the waist, pulling her into the tiny office. Their lips met with a furious passion that had been building since the day they met. Jude’s arms were tight around her waist, and she could feel the heat of his body as he pulled her against him. His tongue teased over the crease of Harper’s mouth, urging her to let him inside. She obliged willingly, letting him take her breath away. She could taste a hint of peppermint as he pulled her lower lip between his and worried it gently with his teeth. The sensation was so damn sexy and sent shivers all over. When he pulled back, she didn’t want to let go and held onto him.

“Yeah,” she panted. “You’re exactly what I was looking for.”

“Good.” She wrapped her arms around his neck and leaned in to kiss him again. Despite everything her sensible brain was screaming, this felt right. Suddenly, all those obstacles she’d been worrying about for the last several weeks seemed to dissolve the second they touched. Her fingertips slid under the hem of his shirt and grazed the smooth flesh. She wanted to feel all of him. Every inch of his body would be a new, indescribable wonder for Harper to explore. It had been ages since she had sex, but she figured it was like riding a bike. She was more than willing to give it a shot.

“Wow, what… what is this all about?” he asked when he was able to breathe again. “I thought we weren’t supposed to do this.”

Harper shook her head. “Shut up. I don’t want to think. My stupid head gets in the way of everything.”

“Then don’t think,” he said, cradling her head and feathering another kiss over her mouth. “Just feel it.”

“Let’s get out of here.” She grabbed his hand and led him out the back of the shop. Her heart pounded in her chest so hard that she could feel it in her ears. They ran across the road to where Jude’s jaguar was parked under one of the quaint streetlamps. He pulled her around to the passenger door and held it open. She turned, cradled in his arms and gazing up into his eyes. His hair was damp with sweat, and his eyes glistened with desire. Harper pressed herself against him, urging him to kiss her once more. His large hands circled her waist, sliding around her back and down until they rested at the curve of her buttocks. When he kissed her again and pulled her tight into his body, she could feel the hard knot of his need pushing at her center.

Harper brushed her fingers through his hair, feeling the silky strands slide between them. She used the tip of her tongue to trace his cupid’s bow, then suckled at his lip gently. Why did he have to taste so good? It was making it harder and harder to pull away, and no matter how much she tried to drown out the little voices in her head, they were still there.

“Wait,” she said, putting her hands against his chest. Her head was swimming as if she’d had a beer instead of a latte.

“What’s the matter?” he said, nuzzling his rough cheek against hers. He nuzzled under her hair and kissed her neck just under her earlobe. “Are you okay?”

“Stop a second,” she said. This time she pushed him against the doorframe. “We can’t… I can’t do this.”

“I just don’t think I’m ready for this.” Harper ducked under his arm and stumbled down the sidewalk a little ways. She had to get away from him, or she’d lose her resolve. “We can’t just hop into bed together. I barely know you.”

“You know me pretty damned well, Harper. I mean, I’m a simple guy.” His expression was playful, and when he reached out to take her hands, she let him.

“I’m the most complicated person I know,” Harper said. She pushed her hair behind one ear and began to pace. “People don’t ask me to pick out birthday cards because I’ll stand in the aisle debating one over the other for hours. And God forbid if you get behind me in the serving line at McDonald’s.”

“What are you saying? You’ve decided you don’t like me?”

Harper’s eyes widened, and she shook her head. “God no. I like you. I really like you. But our situation is complicated. I’ve been going back and forth on this all night, but the truth is, you’re the father of one of my students. I can’t jeopardize my teacher-student relationship with Kit because we got overheated.”

“Why would you think that your relationship with Kit would be compromised?”

“Think about it. If things between us went badly, it would inevitably affect him. And then there’s this town. This small, sleepy, gossipy little town would have a field day with it. There are people in Crawford’s Landing who like nothing more than making a fuss. Even if Mrs. Nettles was okay with it, tongues would wag until she decided it wasn’t okay.”

“I think you’re worrying too much.”

“You haven’t lived here your whole life. Trust me, I’ve seen it happen.”

Harper searched Jude’s expression for signs of anger, but there were none. Disappointment, perhaps, but no anger. “So, you’re saying that I have to wait until June to be in love with you?”

Nervous laughter bubbled up from her belly. “Oh, come on now,” she said. “You aren’t in love with me.”

Jude grinned, and she wanted to slug him. How dare he bring that killer smile and mischievous cock of his eyebrow into this discussion? “I think I know how I feel, Harper.” He twirled her around as if dancing, then embraced her again. “But if I have to wait for you, I will.”

“You will?” She hoped that her face didn’t betray the doubt. After all, he was a rock star.

“I’m not going anywhere, Harper.” He tipped her chin higher and pushed her hair away from her forehead. “You don’t seem to understand. I haven’t been able to play a single note in three years. Then I met you, and it all came back. You made me hear the music again, and now that I can, I’m not going to let you go. I’ll wait as long as you want, but I should warn you. I never give up.”

About Alexandra:  Alexandra Christian is an author of paranormal and contemporary romance with an occasional foray into horror. Her love of Stephen King and sweet tea has flavored her fiction with a Southern Gothic sensibility that reeks of Spanish moss and deep-fried eccentricity. Her guiding principle as a romance novelist has always been to write romantic adventures for people who think they hate romances. After all, love itself is life’s greatest adventure.

Lexx is a native South Carolinian who lives with an epileptic wiener dog and her husband, author Tally Johnson, in a small town just south of Charlotte, NC. In addition to her writing, she also has unhealthy obsessions with supervillains, Sherlock Holmes and Star Wars. Her long-term aspirations are to one day be a best-selling authoress and part-time pinup girl. Questions, comments and complaints are most welcome at her website: http://lexxxchristian.wixsite.com/alexandrachristian