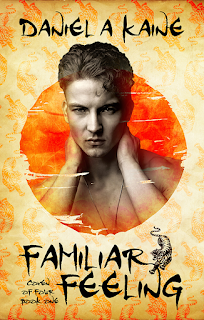 Drew never believed in magic. Then three years after his wife’s unexplained death he unearths a book of spells in his attic. Reading the first ‘stupid poem’ seems harmless, until he acquires his very own familiar, Felix.
Drew and Felix soon realise an attraction that goes beyond their magical bond. However, there’s a coven of demon-worshipping witches out to steal Drew’s newfound power. If they want to survive long enough to see where their mutual desires take them, Felix must teach Drew the art of witchcraft. But will he be ready in time?

Daniel was born and raised in the Land of Rain, aka England, where he now lives with his four lovable furballs; Mik, Ash, Spidey and Flash. Originally trained as a Biology teacher, Daniel was unsure what to do with his life until he came across fanfiction for his favourite anime and decided to have a go at writing his own. To this day, he still cringes at the memory of the cheesy terminology he used.
When not writing, Daniel enjoys a variety of activities, including running, going to the gym, bondage, watching anime, and the mass-slaying of virtual monsters in the hopes of receiving epic loot. One day, he hopes to become a werepanther and invent chocolate that can be eaten all day without making you fat.