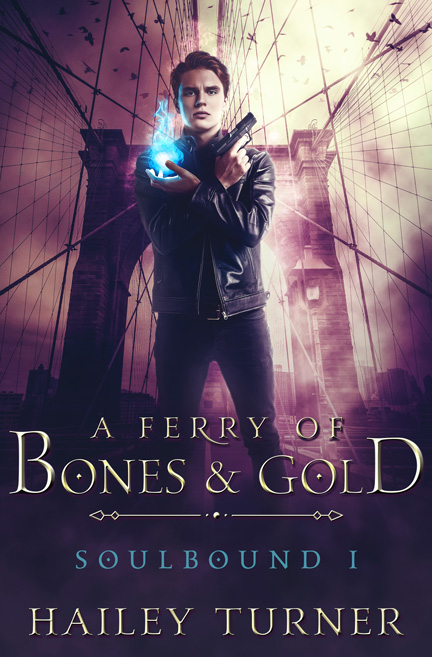 …I cut my teeth on science fiction and fantasy as a kid. When I found urban fantasy way back when, I was in heaven. Magic in the modern day world? Creatures out of myths? Gods and monsters? Sign me up!

My reading background for urban fantasy or paranormal romance were books published through the big trade publishers. Think Jim Butcher’s Dresden Files, Patricia Brigg’s Mercy Thompson series, Laurell K. Hamilton’s Anita Blake series, and many more. Out of all those series, very few had any LGBTQ+ characters, and I think only Patricia Brigg even bothered to write a short story for her gay couple.

I cut my teeth on science fiction and fantasy as a kid. When I found urban fantasy way back when, I was in heaven. Magic in the modern day world? Creatures out of myths? Gods and monsters? Sign me up!

My reading background for urban fantasy or paranormal romance were books published through the big trade publishers. Think Jim Butcher’s Dresden Files, Patricia Briggs’s Mercy Thompson series, Laurell K. Hamilton’s Anita Blake series, and many more. Out of all those series, very few had any LGBTQ+ characters, and I think only Patricia Briggs even bothered to write a short story for her gay couple.

I remember wanting to read a book with queer characters as the main protagonists so badly while growing up. I know there are a lot more diverse books out these days, which is good. Change is coming, but it’s coming slow, because trade publishing moves at a glacial pace. That’s one of the reasons why I absolutely love indie publishing. It gives authors a chance to put forth the kind of books I always wanted to read growing up.

I write the books I love to read, and what I love most is science fiction and fantasy pretty equally. (I also like blowing stuff up but that’s a different story.) My policy as a writer though, is if I’m writing a particular genre, I tend to not read it. I was on a contemporary kick while writing my Metahuman Files and when I wanted to start reading some urban fantasy again, I’d started writing it and had to take a reading break after only getting to devour one series.

What I’ve noticed with urban fantasy as a genre is that the found family trope really lends itself well to these kinds of stories. SJ Himes plays around with it in her Beacon Hills Sorcerer series, the one series I’ve managed to sink my teeth into. (I promise I’m not a vampire, no matter how much I hate the sun!)

Her main character, Angel, has a younger brother, but the rest of his family died years before in a clan war where vampires were the weapons of choice. He’s filled the void with a snarky teaching partner, an apprentice, a cute dragon, and a sexy Irish vampire lover. They all come from different backgrounds and converge in Boston, dealing with threats and learning to trust each other. I’m a sucker for that kind of plot and her characters.

I’m trying to get better at taking breaks between projects, which is where I’ll probably do the majority of my reading from here on out. As for some other queer urban fantasy series I can’t wait to read? Amelia Faulkner’s Inheritance series is top of the list, and I want to carve out time to read it between the next books that I write. She writes about gods and tricky relationships, with some more adult themes related to addiction. Did I mention the slow burn I hear runs through the entire series? Top of the list for me for sure!.

Jex Lane’s Beautiful Monsters is another series I can’t wait to read. It has a broader range of relationships than the other two series (from M/M to M/F and a bisexual main characters) and it’s much darker on multiple fronts. It’s definitely not for the faint of heart, but I am so here for dark, plotty stories. I just need to finish Soulbound II before I can grab those off my bookshelf and dive in.

Jordan L. Hawk’s Whyborne & Griffin series is another urban fantasy series that’s on my list to read. The books are set in Victorian-era America, so it’s got a bit more of a historical bent to it. And it’s ten books long! I love long books and long series.

These are just a few of the queer urban fantasy books out there that I really want to read. I just have to find time around my hectic day job and all the writing I need to do! I swear, my To-Be-Read pile is the size of Mount Everest these days. Why do so many authors have to put out so many wonderful books? I can’t keep up!

But I guess as problems go, having lots of books to read isn’t.

A Ferry of Bones & Gold by Hailey Turner When the gods come calling, you don’t get to say no.

Patrick Collins is three years into a career as a special agent for the Supernatural Operations Agency when the gods come calling to collect a soul debt he owes them. An immortal has gone missing in New York City and bodies are showing up in the wake of demon-led ritual killings that Patrick recognizes all too easily from his nightmares.

Unable to walk away, Patrick finds himself once again facing off against mercenary magic users belonging to the Dominion Sect. Standing his ground alone has never been a winning option in Patrick’s experience, but it’s been years since he’s had a partner he could trust.

Looking for allies in all the wrong places, Patrick discovers the Dominion Sect’s next target is the same werewolf the Fates themselves have thrown into his path. Patrick has been inexplicably attracted to the man from their first meeting, but desire has no place in war. That doesn’t stop Patrick from wanting what he shouldn’t have. Jonothon de Vere is gorgeous, dangerous, and nothing but trouble—to the case, to the fight against every hell, and ultimately, to Patrick’s heart and soul.

In the end, all debts must be paid, and Patrick can only do what he does best—cheat death.

“I know what I promised you,” Marek said quietly. “I wish I could say this whole mess is your answer, but the mage isn’t a werecreature.”

“Neither are you, mate.”

“Yeah, but you trust me. I wouldn’t trust a mage working for the SOA if my life depended on it.”

Jono rolled his eyes. “It does, remember?”

Marek made an annoyed sound. “He’s an asshole.”

“True, but the bloke does have a nice arse.”

“Did you fuck him?” he heard Emma yell in the background, easily picking out her voice with his preternaturally enhanced hearing.

“I got his scent, if that’s what you’re asking.”

Marek let out a surprised squawk before there was a scuffle and Emma’s voice came more clearly through the mobile. “Really, Jono? Really?”

Jono shrugged, even though she couldn’t see it. “Would’ve done it anyway before I even knew he was a mage.”

“Ugh,” she groaned. “No picking up customers. That’s a rule.”

Hailey Turner is big city girl who spoils her cats rotten and has a demanding day job that she loves, but not as much as she loves writing. She’s been writing since she was a young child and enjoys reading almost as much as creating a new story. Hailey loves stories with lots of action, gritty relationships, and an eventual HEA that satisfies the heart.