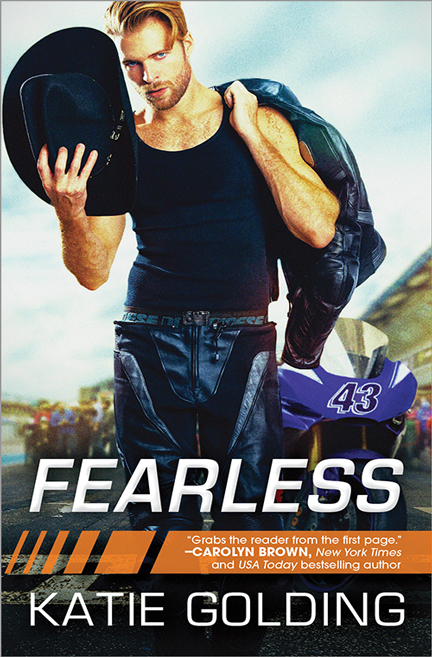 He’s got one last chance

Billy King may be smiling under his black Stetson, but the plain truth is this cowboy-turned-racer is hurting: for his horse back in Memphis, for his girl with one boot out the door, and for his faltering career thanks to an injury that’s not getting any better. The moment he’s free from the press circuit, Billy bolts home—resolved to heal, and ready to win Taryn’s heart a second time.

He’s got one last chance

Billy King may be smiling under his black Stetson, but the plain truth is this cowboy-turned-racer is hurting: for his horse back in Memphis, for his girl with one boot out the door, and for his faltering career thanks to an injury that’s not getting any better. The moment he’s free from the press circuit, Billy bolts home—resolved to heal, and ready to win Taryn’s heart a second time.

Hopefully, before the love of his life is gone for good.

Taryn Ledell never wanted to fall for sweet blue eyes and a deep southern drawl. As a World Superbike racer, she had plans, and none of them involved playing second fiddle to any man. But now he’s back, and she’s forced to make some hard choices. With her sponsors eager for a decision, Taryn finds herself tangled in all the lines they’ve drawn in the sand. But broken bones and broken hearts don’t heal overnight, and the cost of forgiveness can be sky high: unless Billy can prove that his heart never left the ranch…or her.

My whole heart was thumping strong in my chest while everything in me begged to kiss him. But I couldn’t bring myself to make the first move—I wanted Billy to go for it. To step up and take the risk and feel all the elation of me rewarding it with full-on acceptance because for once, what a guy wanted was exactly what I wanted, too.

He let out a deep sigh that was almost more of a groan, sinking my hopes. “You’re not making this easy on me at all, are you?”

He looked away, unable to hide his smile. “Nothing.”

It was too much fun; I couldn’t resist. The way he was, the way he made me feel. “You want to kiss me, Billy?”

He grinned at the ground. Probably, I was pushing too hard, too fast, but I didn’t really know any other way to go. Not when I wanted him to kiss me that damn bad.

When he lifted his head, there was no fear in his blue eyes. Just a pure kind of acceptance that he wasn’t going to be happy until he got what he wanted. “Yes, ma’am. I do.”

My heartbeat took off as Billy stepped closer, his hat hiding both of us from the February moon. The rich scent of him was too tempting: I pulled it deep into my lungs, drowning in the masculinity rippling off him. But he still wasn’t touching me, no matter how much I wanted him to.

“Would that be all right?” he whispered.

I don’t remember nodding or breathing, just beaming at him and praying my self-restraint could hold on a little bit longer. “I’ll answer that in a minute.”

Billy smiled, and then I finally got everything I’d been craving. He brushed his fingertips over my cheek with a touch softer than the wishing petals of a dandelion, hooking a knuckle under my chin and tilting my lips up to his. My eyelashes fluttered closed, my pulse thundering through my veins as I waited and waited, desperate for the first crash of his mouth against mine.

All I felt was space between us, growing longer and wider until it just wasn’t anymore—the first brush of his lips so soft, I wasn’t even sure that I’d felt him. But Billy was there, his kiss as slow as his drawl, careful and gentle, and little more than a sip of an ocean I was eager to disappear into.

I took his jaw between my palms, prickly with stubble but sculptured and strong. Drawing him down to me, I quickly melted into the shocking plumpness of what I’d considered to be thin lips but now felt rich and deep, and a whole new shade of delicious. Then he moaned, his hands squeezing my waist and pressing me up into him. It was like embracing iron, rippled and smooth, the bite of his buckle scraping my belly, and my hips pressing hungrily toward the long, thick swell growing behind his zipper.

He took a needy gasp for air, and I hugged him closer, slipping my tongue into his mouth. A growl churned from low in his throat as the kiss turned dirtier, the strike of his tongue and bite of his lips getting wonderfully sharp. But not sharp enough for what I wanted when my body was catching fire everywhere he touched me: his wide palm secure on my lower back, his other hand buried in my hair and massaging my scalp.

He felt so good, too good. And he hadn’t grabbed my ass once.

“You know”—I leaned back, my hand on his chest and Billy breathing hard, blinking at me with his hands suspended in place—“you don’t kiss like a bull rider.”

His brow furrowed, the slightest spark of suspicion in his eyes. “How many bull riders you kissing?”

He half rolled his eyes, but he was smiling again as he settled his hands on my waist, his thumbs petting the space leading to my hips. All trace of jealousy totally and completely gone, thank God. “All right, what do you got against bull riders?”

I did my best to calm my libido—which wasn’t helped by tapping his rock-solid chest with a single finger. But I wanted to set the record straight before we stumbled into a problem. I was never going back to that life, not when I had waited nine hours for Travis to wake up and not when I had been more terrified than I knew a person could be when Jace was airlifted. “You put your bull above everything else. And I’m telling you right now, Billy King, no eight-second bull ride is ever going to come before me.”

“Yeah?” Billy drawled, but his smile was clearly teasing as his hands slid from my waist to lock somewhere over my lower back. He pulled me closer until I was nearly gasping from the tease of his erection against my hip, straining his zipper and parching my mouth. His eyebrow arched in the picture of confidence, then he leaned down close enough to kiss me again, whispering against my lips, “Good thing I’m not a bull rider no more…”

Katie Golding writes high-octane romance about complicated people always searching for the next thrill ride. She lives in Austin, Texas with her beloved husband and son.