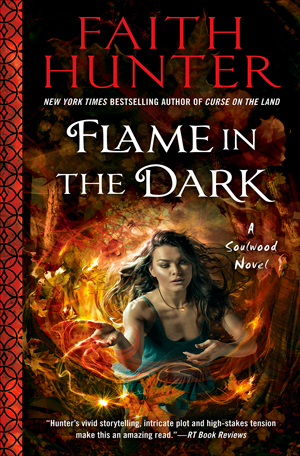 We love Faith Hunter’s novels, having been hooked on her Jane Yellowrock series, and now this spinoff, the Soulwood series, featuring Nell Ingram. Our reviewer SJ gives FLAME IN THE DARK 5 Hearts and a Recommended Read stamp of approval! This is one book–heck, one series–you don’t want to miss.

Read our review and enter the giveaway for a chance to win one of three sets of the first two Soulwood books!

Nell Ingram has always known she was different. Since she was a child, she’s been able to feel and channel ancient powers from deep within the earth. When she met Jane Yellowrock, her entire life changed, and she was recruited into PsyLED—the Homeland Security division that polices paranormals. But now her newly formed unit is about to take on its toughest case yet.

A powerful senator barely survives an assassination attempt that leaves many others dead—and the house he was visiting burns to the ground. Invisible to security cameras, the assassin literally disappears, and Nell’s team is called in. As they track a killer they know is more—or less—than human, they unravel a web of dark intrigue and malevolent motives that tests them to their limits and beyond.

How Occam Got His Name by Faith Hunter, a serial story, part 2:

Daddy was a traveling preacher, with four Texas churches in Dickens, Ralls, Crosbyton, and Spur, and he and mama parked their RV in a different town every weekend, leading hellfire-and-damnation services in homes or small churches or empty storefronts, meeting all day, every Sunday, with the rare fifth Sunday off. That was the weekend his daddy stayed fighting drunk or passed out drunk.

They didn’t stay anywhere long, except Dickens, where they rented a small furnished house with a root cellar. It came with real beds, which was a nice change. It even had a window unit air-conditioner to keep the place sorta cool. Trace liked Dickens, and he liked Wayman. Making friends was hard for the son of a plastered pickled preacher man—which is what he’d heard his daddy called once. Friends had been scarce mot all his life. But Wayman played pranks, like blinding him with a flashlight and then running into the night.

“Wayman!” Trace shouted. “Blast it all! Where’d you run off to?” His vision was still messed up by the spots cast by the flashlight-to-the-face joke by Wayman, but not fast enough. He’d have to follow the footprints in the sandy bottom of the wash—Wayman’s and the bobcat’s. The cat had been this way several times, the prints overlapping one another. Bobcats were generally more scared of humans than humans were of them. But this one was bigger than normal. “Wayman!”

This was a fifth Sunday, and he and Wayman had gone into the hills to camp and watch the meteor shower. And hide from his daddy’s fists and his drunken sermonizing, and from Wayman’s mama’s boyfriend who was a little too friendly for Wayman’s comfort level.

From up ahead, Wayman squealed his little-girl-squeal, and Trace at least figured out what general direction his friend had run off to. “Stupid idiot.” Trace trudged along the wash, casting the occasional glances up into the night sky and the millions of stars that city folk never saw. No meteors yet.

“We’ll never get back to the tent and the bikes,” Trace shouted as he trudged around the small hill. “And there ain’t even a path to the top. You ever heard of rattlesnakes?”

From the side of the wash, Trace heard a whistling sound and a rough vibration, kinda like a purr, like a housecat would make. A huge housecat. Probably the maker of the bobcat prints. Biggest he’d ever seen. “Dang idiot. Rattlesnakes and bobcats. Shesh.” Louder, he said, “I got a gun, cat. I’ll shoot you if you come at us.” The third book in Faith Hunter’s amazing Soulwood series, FLAME IN THE DARK, excels at ramping the tension of a mystery while the fascinating protagonist, Nell Ingram, continues to shine.

Nell Ingram is an agent with PsyLed, a government agency that investigates the paranormal, the agents of which each have their own abilities. Nell is tied to the earth, in particular, to her land, Soulwood. Through it she can sense things, and the land takes care of her by healing her when need be.

When a powerful senator is nearly killed, Nell’s team is called to investigate. But things are not as they appear, and their assassin seems to be able to disappear at will. Intriguing, diabolical, and complex, the plot flows from one point to the next as Nell and the team put the pieces of this puzzle together.

The secondary characters continue to make this a series worth reading, and the budding relationships Nell has with her Psyled “family” and herself makes for captivating reading.

Then there’s the matter of a problem on Nell’s land, one she’s been putting off fixing for too long. And her relationship with a certain werecat develops, but not fast enough for me.

FLAME IN THE DARK can be read as a standalone but is best enjoyed as the third in this incredibly rich and detailed world. Kudos to Ms. Hunter for getting better with each book, and I can’t wait to see what happens next. The tour giveaway is for 3 sets of the 1st 2 Soulwood books ( BLOOD OF THE EARTH and CURSE ON THE LAND ) and one $50 Amazon gift card (US residents only)! Follow the tour here. 7 Responses to FLAME IN THE DARK–A Recommended Read!