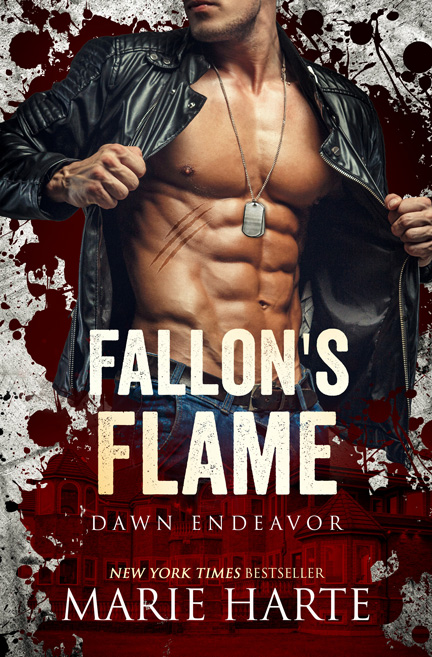 For a limited time, get FALLON’S FLAME, a paranormal romance from NYT Bestseller Marie Harte.

This is a steamy, paranormal shifter romance with a central m/f romance in addition to m/m+ and m/m/f elements.

Genetic manipulation has created the first super soldier, the Circ. The second generation of Circs, able to transform into hulking, inhuman beasts at will and psychically gifted, is much more dangerous than the first. Under Project Dawn Endeavor, the secret four-man team belongs to the mysterious Mrs. Sharpe who is bent on cleaning up science gone wrong around the globe on behalf of the United States government. But there’s more to her agenda than patriotism. If only the team knew what she really had planned. 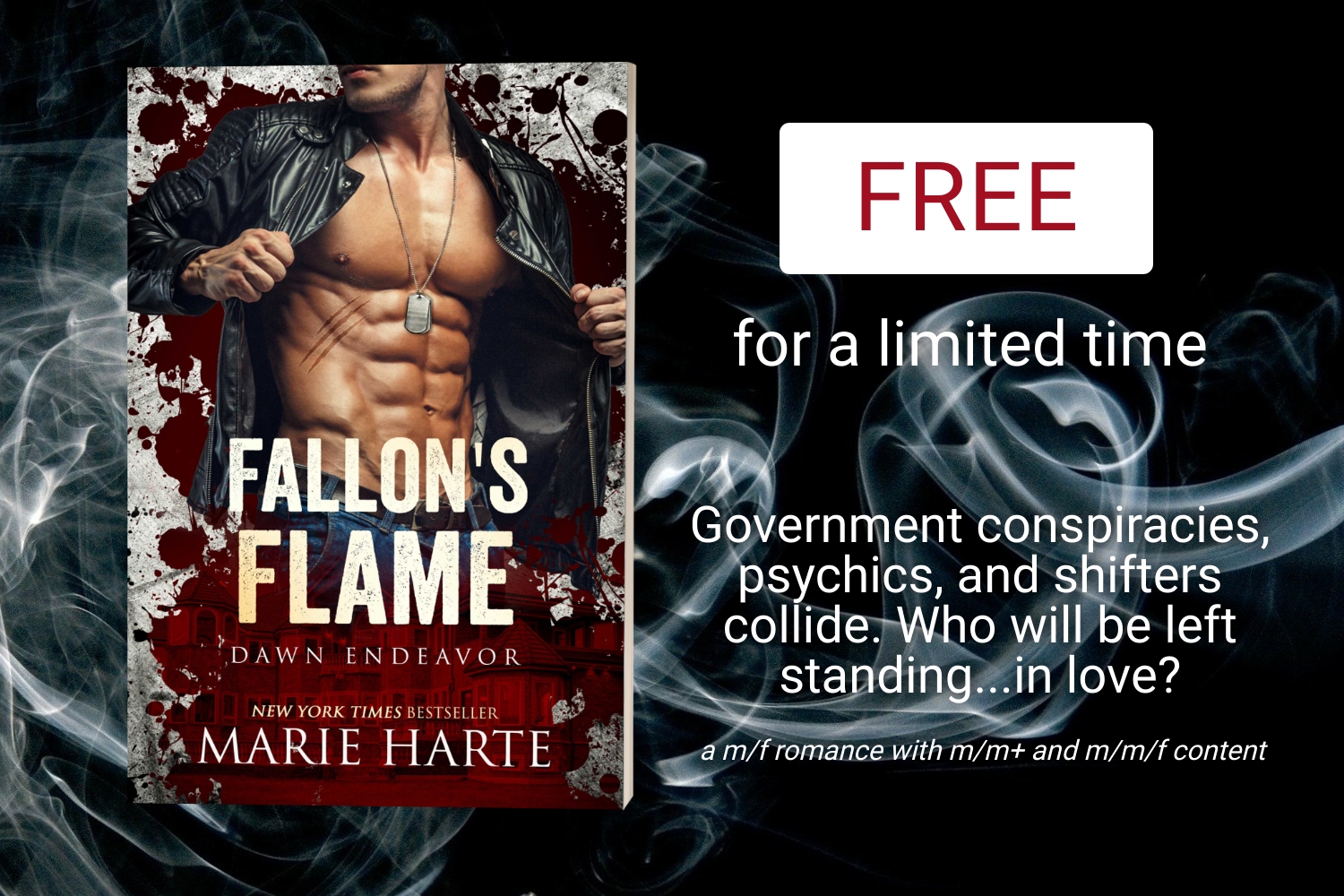 There are few minds Jesse Fallon can’t read. Mrs. Sharpe’s is one of them. Olivia Lynn’s, the team’s new interpreter on their latest mission, is another. The woman is smart, sexy, and hell on Jesse’s libido. Her lips say she refuses to become romantically involved with an ex-SEAL, but her body says something else entirely. Jesse’s Circ, and a Circ can never find satisfaction with a human, because only a Circ can ease his carnal needs. Except Olivia satisfies everything inside him and leaves him craving more. When the mission goes wrong, he’ll have to learn Olivia’s secrets in order to save her, and in turn, save himself. Because a Circ in love is a walking time bomb.

“Do you have a problem with men?” Mrs. Sharpe asked.

“In what capacity, exactly?” Lady, you can’t shake me. I’m like a tick hanging onto your every word. I want this job.

“You’ll be working with four men on this mission.”

“I work with men all the time.”

“Yes, but you’re outside the classroom here, Olivia.”

What did the woman want to know? Olivia couldn’t imagine she’d be tasked with anything dangerous. She wasn’t trained for it and wouldn’t have been selected for anything needing real world experience. But she’d handled tougher interview questions, so she’d answer this one.

“I can handle myself. In addition to staying fit, I take self-defense classes. A single woman living alone can’t be too careful.”

“True.” Mrs. Sharpe smiled, the first indication she liked Olivia. “Just one more thing. I’d like you to meet the men you’ll be working with before I make my final decision. And if you get this job, you do know you’ll train here before going out? That means you’ll be required to eat and sleep here — in your own room of course — alongside the team. A cohesive unit means less possibility for mishap out in the field.”

So, she wouldn’t be translating here. The possibility of leaving the States thrilled her. “Yes, Ma’am.”

Mrs. Sharpe nodded. She turned and pressed into an intercom. “Jack, could you please find the gentlemen?”

“I’m on it.” The deep voice boomed back.

“That’s Jack. He’s our resident handyman who used to work for the government. A Mr. Fix It who can handle a gun as well as a wrench. His wife, Melissa, is our cook. A pretty little blond with a mind as quick as a computer. We also have two girls that come in to clean twice a week, Jack’s nieces.”

“Not such a large staff for a place this big.”

Mrs. Sharpe didn’t say anything, but Olivia caught the shimmer of her anticipation. At the thought, the woman smiled, as if reading Olivia’s mind. That smile probed at something in Olivia’s past, something that reminded her of…

“You called?” A giant of a man lumbered inside. He wore jeans, a button down shirt, and no shoes. Odd.

Olivia considered herself tall, but this man had to be a foot and half taller. Blond and blue eyed, he looked like a first class brawler. As he caught sight of her, his frown turned into a smile. She wanted to call him handsome, but the word didn’t capture the raw power and wildness vibrating inside him. She sensed a strong frustration and sizzling desire bursting to be set free.

“Well, hello there. And who are you?”

“Weapons expert, yeah.” He snorted. “So who’s this? Another experiment, Alicia?”

She glared at him, and he glared back before shifting his gaze away.

“Sorry, Mrs. Sharpe. I haven’t been the same since I’ve been off my meds.” The smile he flashed did little to inspire confidence. “Nice to meet you Olivia.” He turned and left, with what sounded like a growl.

“You’ll have to forgive Gunnar. He’s off his usual regimen and it’s made him more aggressive than usual.”

More aggressive? Meds? Though she hadn’t sensed an imminent threat from the man, she had no doubt he could break her in half should he choose to.

“Mrs. Sharpe?” A tall, dark haired man entered the room. He stopped at a respectful distance from them and waited. He had Asian features tempered by an Anglican ancestor. Handsome and somber, he seemed a direct opposite to the giant who’d stormed out just a minute ago.

“Olivia Lynn, I’d like you to meet Kisho Hayashi. Kisho is a demolitions expert who can do all manner of things. He’s the calm in our storm.”

Olivia stood and was still dwarfed by the man. Unlike Tersch, he didn’t leer. His dark eyes held respect and a polite distance. But when she shook his hand, she nearly trembled at the need pushing at his internal barriers.

She forced herself to show no expression, but the narrowing of Kisho’s eyes told her she hadn’t been totally successful. She subtly withdrew her hand from his larger one and stepped back. “Nice to meet you.”

They watched Kisho leave and another man took his place. This one stood almost as tall as the blond but seemed so commanding. He had to be their leader. Dark haired but with light gray eyes that seemed to miss nothing, he looked every inch a warrior.

“Ah, Jules. Olivia, this is Julian Hawkins, the team leader. Jules, this is the translator I was telling you about.”

Jules didn’t speak. He looked at her with an intensity she found unnerving. Like the others, he had muscles galore, height, and hands that could crush her in seconds. The knowledge was there in his eyes. He knew he was dangerous, and he wanted her to know it as well.

“Interesting.” The way he said it made her aware that he looked at her with more than his eyes. He didn’t ogle, not exactly. His energy, like the others, expressed hunger. But he had that need tightly bound under a well of curiosity.

“She’ll do. Nice to meet you, Olivia.” He turned and left, returning with another man he forcibly pushed into the room. “Suck it up. We all hurt,” he murmured before leaving them alone with this last man.

Olivia had remained standing after first being introduced to Kisho. Now she wished she’d been sitting. Her breath left her in a rush when she looked into eyes as brown as warm amber.  Short dark hair framed a masculine face that would make men envious and have women falling all over themselves for a closer look.

A straight nose, square jaw, arched brows and thick lashes arranged themselves into a face she couldn’t look away from. He had bronzed skin, laugh lines at the corners of his eyes, and firm lips. She had to look up to see him, putting him several inches taller than her own five eleven. Broad shoulders, thick arms and a trim waist sat above long, powerful legs encased in jeans. Like the others, he didn’t wear shoes.

He appeared clean shaven, but when she continued to stare at him, she thought she saw a trace of darker skin along his cheeks and neck.

He opened his mouth and she swore she saw a hint of…fangs? She took a step nearer, needing to see, needing to feel the fan of his breath on her face, to taste the intriguing scent of mint filling the space between them. Her nipples hardened and her womb quickened. She licked her lips and leaned closer.

“Gotta go.” He jerked backward and stumbled over his feet in his haste out of the office.

Olivia had to blink to free herself from his spell. Embarrassed that she’d sent him running from the room, she turned to Mrs. Sharpe, expecting the woman’s dismissal. Nearly jumping her coworker couldn’t put Olivia in a favorable light.

Instead she found Mrs. Sharpe’s wide smile. “Welcome to the team, my dear. I’ll call Ava and get you settled in for the night. Any questions?”

Olivia closed her mouth around a hint of mint. She took a deep breath and realized she hadn’t caught anything Jesse had been feeling. Interesting, to say the least. “Ah, no, no questions.” Except for where my mind has gone. Because I really want a look at that Jesse again. Whoa. Wait. Remember, Olivia, you’re here to work as a translator, not a mattress.

“Good. I’ll have Ava show you to your room and we’ll get the ball rolling.”

As Mrs. Sharpe put events into motion, Olivia wondered just what she’d gotten herself into. The four men she’d met could have posed on any special forces poster. They lived in a mansion away from the military base and worked for a civilian woman, a tiny lady who wore a designer suit and pearls. Talk about stepping into wonderland. 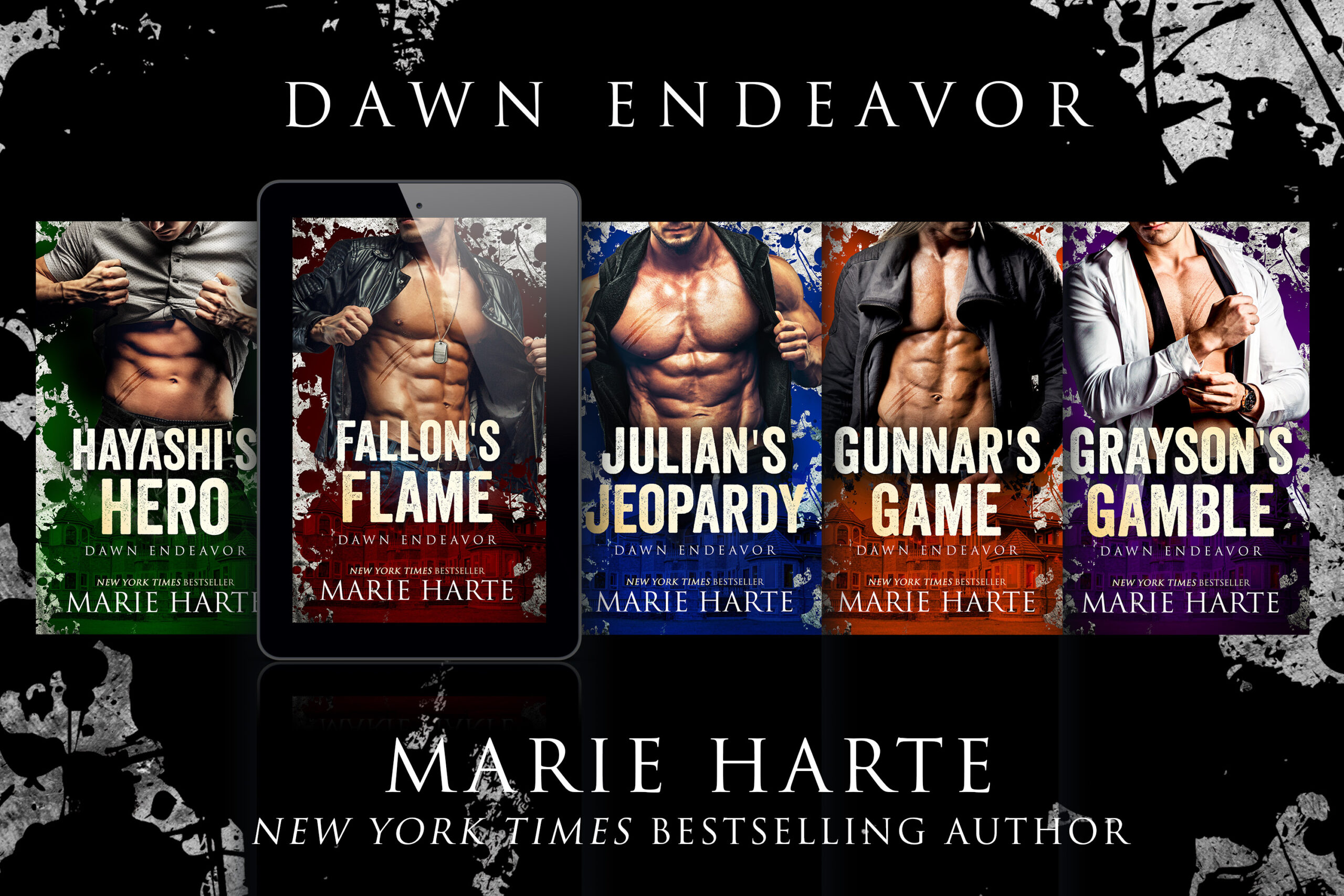 MARIE HARTE is a NYT and USA Today bestselling author of more than 100 romance books. She’s at home in Central Oregon with her always-eating teens, scary cat, and loveable dog.