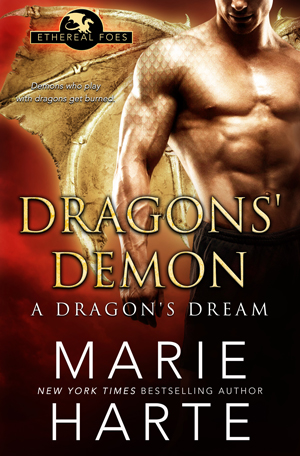 Don’t miss out on Marie Harte’s sexy, fun, paranormal series, ETHEREAL FOES. The first book, DRAGONS’ DEMON: A Dragon’s Dream, is #FREE through April 11th, and note the rest of the series is also on sale.

In the ordinary world, forces are at work which keep the balance of the universe in order. Enter the Sinclairs, higher demons with a mission—to sway those souls on the brink of Decision, to push them toward heaven or toward hell, as they are meant to go. But an amusing prank has unintended results. Now debts must be paid to those who’ve been wronged, be they dragon, demon, angel… or worse. Even demons need to beware fiery dragon love…or get scorched.

In the ordinary world, forces are at work which keep the balance of the universe in order. Enter Eve Sinclair, a higher demon with a mission—to sway those souls on the brink of Decision, to push them toward hell, as they are meant to go.

After a prank played by her brothers, Eve is accused of stealing a precious dragon egg. Worse, it’s a royal egg, as she learns from the furious commander of the dragon legion.

Not a creature to have on one’s bad side, Ranton shifts between his human and dragon forms, keeping Eve off-balance and off her game. Normally a master at manipulating males, Eve finds that Ranton is more than a match for her…as is his brother, the new dragon king. Soon, they’re not only capturing her desires, but her heart as well.

This book was previously released.

“Talk about utterly stupid,” Eve muttered as she sped on her Harley toward Valley Green Park.

She loved her brothers, but honestly, they played too much when they should have been taking inventory of the souls needing saving. Their particular job, in the hierarchy of the Ethereal, was to assess and beguile those on the brink of Decision. To test those whose souls who teetered between eventually going to heaven and going to hell. Existence in either plane was the goal, because living in limbo screwed with the balance of everything.

Though no one soul was ever wholly good or wholly evil, one temperament or the other weighed predominantly in every creature. Even in the self-possessing dragons.

She grimaced and increased her speed. The dragons, like many of the mythical creatures purported to exist at one time or another on Earth, were, in fact, real. They lived buried in the deeper recesses of the world—in the lower realm near the demons—closer to the Earth’s core which provided the necessary heat for their precious eggs to survive.

Unlike the humans, dragons knew about the realities of hell and heaven, and remained free to live in whatever realm they chose. Many often took the form of humans to roam above ground, in the middle realm—in the Ordinary. Like her brothers, they lived for mischief, and for anything that glittered. Partial to gold, they also had appetites far exceeding that of a normal human. They took what they wanted when they wanted, and answered to no one, that she knew of.

And the angels thought they were the favored race….

That her brothers had whisked the egg away from its nest, from its precious heat, meant one of three things. One, they had misjudged the egg’s ability to survive without its birthing fire. Two, they had seriously conned her—which didn’t mesh considering she’d heard that dragon’s angered roar in the bar. Three, and this option seriously sucked, they knew something she didn’t, like that the egg had already hatched.

Imagining a baby dragon making a meal of the greater Philly area, she whipped her bike onto one of the main graveled parking lots of the park and made a left down the wide running/biking trail. Luckily, the lateness of the hour, as well as the steady drizzle of rain, had forced many outdoor nuts inside. The few that still ran stared at her in disbelief as she roared by.

Great. Now she’d have to hurry the rescue so the police wouldn’t be on her ass. So unfair. And all to right a wrong.

Huffing and cursing her brothers again, she stopped when she saw a marker denoting the number six.

She parked and leapt off the bike, swearing when she realized she still needed to cross the river. Not deep, it would nevertheless be cold despite the late summer night. Seeing a ridge of rocks, she raced across the slippery surface with the preternatural agility of her kind and hurried into the woods on the other side.

Once there, she stilled, listening, and felt a pulse that didn’t belong in the Ordinary. Climbing several feet over the small finger of land, she found a tiny, contained blue glow, and within, a round object with the blue, gold and red markings described by her brothers. This egg, however, was the size of an ostrich egg, much, much smaller than the typical dragon eggs she’d seen.

Staring down at it, she cocked her head, hearing a strange, haunting sound. Unearthly welcome and a powerful joy sent shockwaves throughout the woods caging the small egg. Trees creaked, wind howled, and the water near them swirled, rising in direct proportion to the rising volume of dragonsong.

Enamored and utterly moved, Eve slowly dropped to her knees and took the egg in her hands, dousing the small fire with a nod. The minute she touched the egg’s smooth, polished surface, her body lit with ecstasy—a feeling not unlike that she received when she’d made a successful sway.

She felt it, heard herself think it, realized she meant it…and knew she was utterly screwed. Demons and dragons didn’t mix. And what the hell was she thinking wanting to keep Carmaron’s precious young? Dragons weren’t pets. They were malevolent, vicious killers with an appetite for destruction. Pleasant, to her way of thinking, but they had a thing against siding with Ethereal forces.

An appetite for destruction…. When the sky suddenly darkened and a shadow covered her, she didn’t flinch, expecting the worst.

Cradling the egg against her chest, she glanced up. What looked in shadow like a winged angel suddenly showed itself for a furious, fire-breathing dragon. In a human male’s body with large, expansive black wings, Ranton, commander of the dragon legion, made an impressive entrance as he lowered to the ground.

He wore black jeans and boots and a clingy black T-shirt through which his wings commandeered wind. His dark black hair and blazing red eyes sat in a face that any woman would consider handsome. Roughly hewn cheekbones and a strong nose complemented thickly lashed eyes and a stubborn chin. He could have passed for a giant human, save for the fifteen-foot expanse of wings and the red flames of anger burning in his gaze.

Seven feet of enraged male glowered down at her, more ferocious than even the demons of war. “I’ve come for what’s mine,” he growled, flame curling in his eyes, in his hands and sputtering from his mouth. His fingers elongated into talons as his flesh hardened into black scales, obscuring his clothing. Impressive, beautiful even, but for the fact he meant to do her some serious harm.

Don’t do it. The egg’s safe now, give him back. But Eve found it impossible to listen to her inner voice of reason. She sighed as she pooled her power, prepared to defend her tie to the new life against her chest with her every fiber of her being. To the torturous bowels of hell, or, God forbid, the starry heights of heaven. “Of course you have. Well, Ranton? Bring it on. I’m ready.”