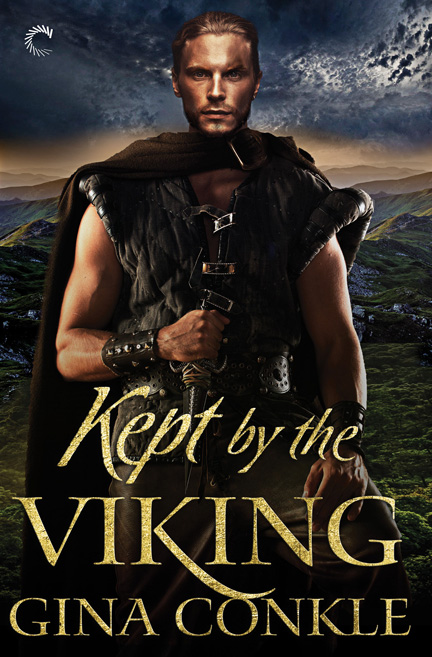 In Gina Conkle’s KEPT BY THE VIKING, true love will test the brotherhood. Rurik is loyal only to his men, the Forgotten Sons, until an offer of land from Normandy’s chieftain intrigues the low born warrior. But, the sultry Parisian thrall he finds in his bed intrigues him more… True love will test the brotherhood.

Rurik is loyal only to his men, the Forgotten Sons, until an offer of land from Normandy’s chieftain intrigues the low born warrior. But, the sultry Parisian thrall he finds in his bed intrigues him more…

Safira needs Rurik’s help to secure safe passage home. Full of secrets, she’s a challenge—one he’s determined to conquer, but their arrival in foreign lands marks a new chapter. An old enemy surfaces and impossible decisions must be made. With alliances fraying, past promises may not be enough to save Rurik from betraying those he’s sworn loyalty to—including Safira.

Facing the campfire, a breeze blew strands of hair across her eyes. The men passed around a flask of wine, laughing and talking. She didn’t know what to do with this ease sitting amongst Vikings. Never had she mixed with coarse soldiers, much less pagans. King Rudolph forbade large numbers of foreign warriors inside the gates of Paris. Visiting leaders entered with a modest honor guard, their remaining fighters staying on the banks of the Seine by colorful tents. Those men had gathered around fires, their bold eyes marking her as she studied them from the safety of her litter when crossing the Paris bridge.

Being with the Forgotten Sons broke her comfortable boundaries. The Viking leader knew it. Each time he looked at her was a dare.

“We could go to the river now. I’ll share my soap,” Rurik said in good humor. “I thought you would prefer less light—”

“Because you will watch me,” she snapped.

“Because I will protect you.” His predator’s gleam was back.

“Watch, protect, possess. It is all the same with you.” She gripped her cloak tightly under her chin. What if it had been Rurik brazenly tracing her exit from Paris?

“I wouldn’t want you hurt before I return you safely to your master.” His voice was steel and silk.

The Viking was dangerous, coming at her again for information. She had her doubts about the beggar woman cheating him out of three deniers for yarrow. But the alternative—a fierce Northman showing goodwill to an old beggar?—was too much to grasp.

Resting an arm on his upraised knee, he laughed easily. “You will tell me what I want to know soon enough. How else can I see you safely home?”

“Take me to the gates of Paris. I will find my way from there.”

“And leave you unguarded?” Mocking humor threaded his voice…the predator having fun with his prey.

“I have lived all my life in Paris.” She leaned close, her words rushing together. “The only thing we fear is Vikings not staying on their side of the Epte River.”

“Yet you asked a Viking to save you.”

“It is only because—” She stopped short.

“Because what?” he prompted softly.

Rurik was a wolf circling. Twilight blackened trees behind him, the dark silhouettes a reminder: night was coming. Though they sat calmly in the grass, threats came at her like unseen arrows from all sides. She’d almost spilled her secrets. If the Viking knew who she was, it’d be disaster. She hugged herself and sat back against the rock she shared with him.

Take first. Ask later. It was his way. She would do well to remember that.

“I’m a patient man.” His gaze dropped from her eyes to her mouth. “You will tell me everything. Who you are, why you were at the Saxon’s outpost, and who waits for you in Paris.”

Everything. The word echoed in her mind. He said it confidently, as if women poured out their deepest thoughts to him all the time. Forceful one moment, gentle the next, Rurik of Birka baffled her.

“Then you wait for nothing,” she said, giving him a Gallic shrug.

“I have a feeling someone will pay for your return.”

“Is that what concerns you, Viking? Claiming a reward?” She glared at Rurik, wanting him to deny his lust for gold. “Fine. Take me to the back of my master’s house in Paris. I promise there will be a small reward for my safe return.”

“Such assurance,” he scoffed. “A slave spending her master’s wealth.” His gaze ranged over her hair. “Nor do you look like a woman who labors in the back of anyone’s house.” Author Bio:  Gina Conkle writes Viking and Georgian romance. She grew up in southern California and despite all that sunshine, Gina loves books over beaches and stone castles over sand castles. Now she lives in Michigan with her favorite alpha male, Brian, and their two sons where she’s known to occasionally garden and cook.