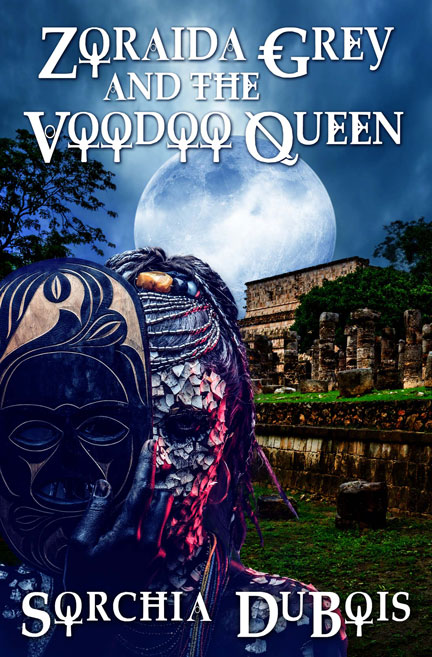 In Zoraida Grey and the Voodoo Queen by Sorchia DuBois, Zoraida Grey needs help. With the witchy Logan clan holding her best friend hostage in a haunted Scottish castle, she can’t trust anyone—certainly not beguiling but dangerous Shea Logan. And Al, her overprotective boyfriend, doesn’t believe in magic.

Only one creature strikes fear in the blackened hearts of the Logan witches. Trouble is Jock disappeared five centuries ago leaving a trail of destruction across the Gulf of Mexico. Now he’s stepped into a steaming pile of Voodoo…

Zoraida makes tough choices in ZORAIDA GREY AND THE VOODOO QUEEN, the second book in a Gothic/fantasy trilogy. Her first priority is tracking down mysterious Jock, a crazy Scottish sorcerer and the only one who can help her free her best friend from the clutches of the Logan witches. She tries to put romance on the back burner, but the two men who accompany her on her quest pull her heart in opposite directions.

To celebrate the release, I’m giving away books and a hand crafted birthstone Tree of Life pendant. In addition, I’m blogging all over the witchosphere about tarot cards, birthstone, and signs of the zodiac.  Check out the posts and enter the giveaway on my website (https://www.sorchiadubois.com/books/witchmageddon-part-deux/) and learn more about this award winning trilogy. Magic may save Zoraida’s skin, but what about her heart?

Only one creature strikes fear in the blackened hearts of the Logan witches. Trouble is Jock disappeared five centuries ago leaving a trail of destruction across the Gulf of Mexico. Now he’s stepped into a steaming pile of Voodoo.

Can Zoraida drag wayward Jock back to Scotland? And what’s she supposed to do with two men who promise completely different futures?

A moist wave of air drifts from the open bathroom window carrying the scent of shampoo and soap. A door creaks, a floorboard pops with the weight of a Scotsman. I fancy I hear his breath from the upstairs hallway, a quiet snap of wood as he comes down the stairs. Al marches down those steps with an even, measured tread. Zhu bounces and bubbles from step to step like water falling over a rocky cliff, but Shea makes no more noise than Johnny Lee on the prowl.

The wooden screen door, swollen with the summer humidity, rasps as he pushes it open. “I never knew such a place existed where you could go naked and still be too warm. It is like walking about in a warm bath all day.”

“So—feel better after your shower? A little less like an asshole, maybe?”

“I said I was sorry.” Shea balances his sandwich, two glasses, and the depleted bottle of Laphroaig in one hand. Even in the near dark, his gaudy Bermuda shorts give off a subtle glow.

“Who picks out your clothes anyway? Or do you find them in dumpsters?”

The whisky he hands me is cold but neat. He sinks into the lawn chair beside me. “I’ll have you know these shorts come highly recommended as standard American togs by no less than Constable MacCaig himself. I have three more just like them.”

Short, round, nearly bald, but with a detective’s discerning gray eyes, the image of Constable MacCaig makes me smile. Nothing in Black Bridge, Scotland, gets past Constable MacCaig—not even the witches in Castle Logan.

“Who knew Constable MacCaig was such a fashionista? At least we won’t have trouble finding you in the snow, come winter.” The faint light of the crescent moon shimmers faintly from indigo tattoos twining up his right arm and down his torso. I give myself another mental shake and concentrate on my whisky. “How did you and Constable MacCaig get so chummy?”

He does not reply immediately, but takes a drink. The muscles in his jaw knot. “We did not start out as chums.”

“And thereby hangs a tale, I guess.”

“Not a pleasant one. He accused me of spiriting his daughter away.”

After he pulled me out of the oubliette, Shea sent me to Constable and Mrs. MacCaig. A nurse, Mrs. MacCaig bandaged my wounds. Since I fled wearing only my underwear and bathrobe, she gave me clothes for the journey back to Arkansas—her daughter’s clothes. The coat, sweater, and jeans are tumbling in my dryer right now.

“MacCaig wouldn’t accuse you if he didn’t have reason.” My tone is harsher than I intend. I am an expert in the way male Logan witches manipulate, persuade, seduce. “That’s something I would expect from Michael, more than you.”

“Really?” His profile is black against the glow of the streetlights and the sky.

A chill crawls down my back like a spider with eight cold feet. “What happened to her?”

He shakes his head, concentrating on the glass of whisky intently before he drains it. “I’m not certain.”

Johnny Lee Hooker slinks along the porch rail. His tail twitches and his ears cup toward the woods as the moon breaks free of the tree branches. A whippoorwill calls from the fringe of woodland, but this bubble of peace extends only so far. Outside, the world is uncertain and scary. On my very own porch, Shea Logan is proof of that.

How deep into Michael’s plans is Shea—how much has he done and how much more does he plan to do to keep Michael’s trust? Whether he intends to prove his loyalty to Michael or to take Michael’s place as laird of the Logan witches, he’ll need help. He’ll need the Stone of Adamantine. Award-winning author Sorchia Dubois lives in the piney forest of the Missouri Ozarks with eight cats, two fish, one dog, and one husband.

A proud member of the Scottish Ross clan, Sorchia incorporates all things Celtic (especially Scottish) into her works. She can often be found at Scottish festivals watching kilted men toss large objects for no apparent reason.

3 Responses to #Giveaway with Sorchia DuBois, Author of Zoraida Grey and the Voodoo Queen