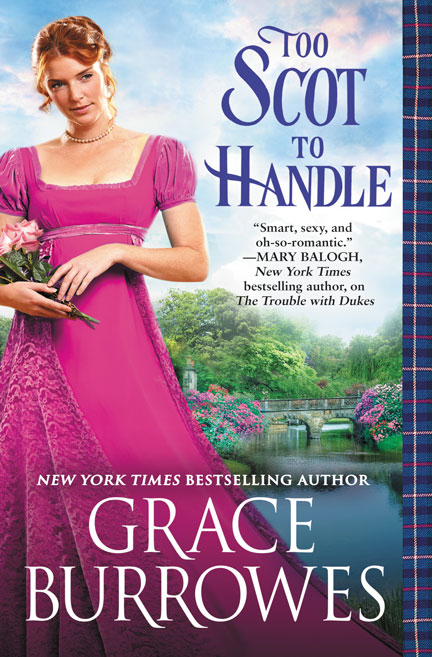 TOO SCOT TO HANDLE by Grace Burrowes

As a captain in the army, Colin MacHugh led men, fixed what was broken, and fought hard. Now that he’s a titled gentleman, he’s still fighting—this time to keep his bachelorhood safe from all the marriage-minded debutantes. Then he meets the intriguing Miss Anwen Windham, whose demure nature masks a bonfire waiting to roar to life. When she asks for his help to raise money for the local orphanage, he’s happy to oblige…

Title: TOO SCOT TO HANDLE As a captain in the army, Colin MacHugh led men, fixed what was broken, and fought hard. Now that he’s a titled gentleman, he’s still fighting—this time to keep his bachelorhood safe from all the marriage-minded debutantes. Then he meets the intriguing Miss Anwen Windham, whose demure nature masks a bonfire waiting to roar to life. When she asks for his help to raise money for the local orphanage, he’s happy to oblige.

Anwen is amazed at how quickly Lord Colin takes in hand a pack of rambunctious orphan boys. Amazed at how he actually listens to her ideas. Amazed at the thrill she gets from the rumble of his Scottish burr and the heat of his touch. But not everyone enjoys the success of an upstart. And Colin has enemies who will stop at nothing to ruin him and anybody he holds dear.

He’d taken care that this kiss be private, and thus unhurried.

Anwen liked the unhurried part exceedingly. Lord Colin held her not as if she were frail and fragile, but as if she were too precious to let go. His arms were secure about her, and he’d tucked in close enough that she could revel in his contours—broad chest, flat belly, and hard, hard thighs, such as an accomplished equestrian would have.

Anwen teased him back, getting a taste of peppermint for her boldness, and then a taste of him.

“Great day in the morning,” he whispered, right at her ear. “I won’t be able to sit my horse if you do that again with your tongue.”

She did it again, and again, until the kiss involved his leg insinuated among the folds and froths of her riding habit, her fingers toying with the hair at his nape, and her heart, beating faster than it had at the conclusion of their race.

“Ye must cease, wee Anwen,” Lord Colin said, resting his cheek against her temple. “We must cease, or I’ll have to cast myself into yonder water for the sake of my sanity.”

“I’m a good swimmer,” Anwen said. “I’d fish you out.” She contemplated dragging a sopping Lord Colin from the Serpentine, his clothes plastered to his body….

“I’d rather kiss you again.” And again and again and again. Anwen’s enthusiasm for that undertaking roared through her like a wild fire, bringing light, heat, and energy to every corner of her being.

“You are a bonfire in disguise,” he said, smoothing a hand over her hair. “An ambush of a woman, and you have all of polite society thinking you’re the quiet one.” He peered down at her, his hair sticking up on one side. “Am I the only man who knows better, Anwen?”

She smoothed his hair down, delighting in its texture. Red hair had a mind of its own, and by the dawn’s light, his hair was very red.

“No, you are not the only one who knows better,” she said, which had him looking off across the water, his gaze determined.

“I’m no’ the dallyin’ kind,” he said, taking Anwen’s hand and kissing it. “I was a soldier, and I’m fond of the ladies, but this is… you mustn’t toy with me.”

Everlasting celestial trumpets. “You think I could toy with you?”

“When you smile like that, you could break hearts, Miss Anwen Windham. A man wouldn’t see it coming, but then you’d swan off in a cloud of grace and dignity, and too late, he’d realize what he’d missed. He wouldn’t want to admit how foolish he’d been, but in his heart, he’d know: I should ne’er have let her get away. I should have done anything to stay by her side.”

I am a bonfire in disguise. “You are not the only one who knows my secret. I know better now too, Colin.” She went up on her toes and kissed him. “It’s our secret.” THE TROUBLE WITH DUKES, #1

WHERE TO FIND THE AUTHOR