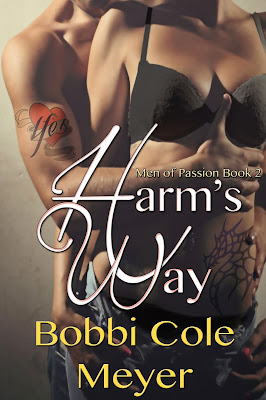 McKay McLemore is the best there is at her job—finding people who don’t want to be found. But when the super-sexy, Harley Davidson rider, Harm Pranston, pays top dollar for her to locate a woman and her teenaged son she becomes suspicious. What are his motives? Is he stalking the woman who is running scared? Yet despite her trepidation, and against her will, McKay aches to feel Harm’s tough-as-nails body against hers.

Harm has his reservations about hiring the sharp-tongued McLemore to locate a woman he hasn’t seen in 16 years. First off, the red-headed investigator treats him like a suspected criminal, and secondly he has to fight his urge to lose himself in her. Just recovering from a gut-wrenching break up, the last thing Harm needs is a dragon-tattooed Amazon who makes him want to drag her off to a cave somewhere…

The first 10 purchasers of Harm’s Way from MyRomanceStory.com will each receive a $10 gift coupon for purchase of hot romance books from the MyRomanceStory e-bookstore site.
After shaving and showering Harm headed downstairs. He’d been assured the P.I. he’d hired, Mac McLemore, was a stickler for being on time, so Harm was seated at the lounge bar and waiting for him by seven-thirty.
Thirty minutes later he glanced at his Rolex.
Two minutes ‘til eight. Let’s see how accurate your dad was in describing you, Mac.
When he looked impatiently back to the lounge entrance, Harm was just one of the many men who watched in mute fascination as the woman with mile-long legs glided through the door. She exuded such a commanding presence she ‘owned’ the lounge the minute she entered. She stood framed in the doorway, raking the room with a smoldering look.
Because all eyes of the men were riveted upon her, their women stared, too. While the men ogled appreciatively, the women frowned jealously.
Harm was among those unable to tear his gaze away. Silently critiquing her, he found it intriguing that this stunning mystery woman seemed completely oblivious to the attention she was generating as she stood relaxed with her hands on her hips.
Harm watched her almond-shaped, forest green eyes sweep back and forth throughout the lounge. She was evidently searching for someone in particular. Harm had to squash the ridiculous urge to jump up and shout, “Me, gorgeous. Here I am!”
She reminded him of the star on an old TV Wonder Woman rerun he had recently seen; the kind of take-charge, take-no-prisoners kind of woman any man would aspire to claim as his own, with a touch of a jungle queen thrown in. Those cat eyes of hers were almost feral in their avid search of the room.
The emerald green tank top she wore, which matched her eyes, didn’t quite meet her skin-tight, hip-hugger jeans, leaving exposed a sliver of tanned skin, where the head of an intriguing dragon tattoo teased the onlookers.
Whoever did that tat did one hell of a job, he thought as she stepped farther into the room and floated through the crowd—and that was how it seemed to him—that she floated.
It was the first time a woman had peaked his interest this much since Kayla Saradon, who had awakened depths of desire in Harm he’d never known were possible.
Thoughts of those torrid nights of intense lovemaking with Kayla, as one of her “husbands” in their happy polyandry-style family, and their many forays into sensual explorations came vividly back to Harm at that moment. Along with that flash of memory came the cutting edge of devastating pain he’d lived through when he lost it all.
He told himself since the split with Kayla, and the loss of his best friends and fellow ‘husbands’, that he could do fine without that kind of intimate family connection, not to mention the mind-blowing sex.
But suddenly, seeing this woman who exuded that same intense sensuality as Kayla had, Harm felt sexually re-energized. The sudden rush of desire to re-experience those kinds of erotic nights he’d shared with Kayla flooded through him, pulsating straight to, and hardening, his penis.
To his surprise, the woman came toward the bar and right at him, stopping before him to ask, “Your name wouldn’t be Harm Pranston, now would it?”
Shocked, Harm thought, Sonavabitch! But he managed to keep his voice casual as he answered, “It would.”
Now that she was close to him he caught a whiff of her womanly smell, a mixture of citrus body wash tinged with a hint of floral perfume. It went straight to his already straining dick.
“Mac” McKay fully assessed Harm. Checking out his body, the minute he stood to acknowledge her, she figured his tall frame was all muscle. The way his amazing blue eyes ate her up caused her body to clench from the tips of her breasts to the secret place between her legs. Her gaze took in his well defined lips, which she had the almost uncontrollable urge to trace with her fingertips to find out if they were as smooth and as soft as they seemed. His smoothly muscled arms were crossed across his broad chest and she wondered what they would feel like wrapped around her.
“Were you looking for me?” Harm asked, thinking, Oh, please, if there is a God, say yes.
McKay felt a tiny frisson chase across her skin at the sound of his voice—low, a sexy deep rumble that set off vibrations that skittered like a pinched nerve down to her lower abdomen.
She mentally composed herself as she replied, “You could say that.” She stuck out her hand, which Harm clasped it in his large, slightly calloused palm.
The touch sent another surge of electricity through her. With a quick intake of breath, she inhaled Harm’s clean, musky scent and savored it for just a moment, her eyes sliding appreciatively to the red heart tattoo with the “yes” inside barely visible on his arm.
For the first time in a long time, McKay had a strong yearning to really know a man.

Bobbi Cole Meyer is the pen name for Barbara Meyer, who relocated from her hometown of Jackson, Mississippi, to Nashville, Tennessee to pursue a career as a lyricist. Over the years Barbara has had numerous songs she co-wrote cut by major artists such as Tom Jones, Loretta Lynn, Barbara Mandrell, Barbi Benton, Stella Parton, The Soul Shakers, the Poppies, Bandana, Mason Dixon, the Wright Brothers and several others. She also co-wrote the theme song for the Italian movie, Summer Affair, with well-known guitarist and composer, Bucky Barrett.

Now residing in the small town outside Nashville, Tennessee, with new hubby, Hank, Barbara is busy pursuing a second career, writing fiction, which she claims is her first love.

Barbara’s slogan is, “grab them with the first paragraph and don’t turn loose until the last period.”

She is the author of Obsessive Surrender, and Uncensored Passion, the first book of the Men of Passion series.

One Response to Harm’s Way by Bobbi Cole Meyer