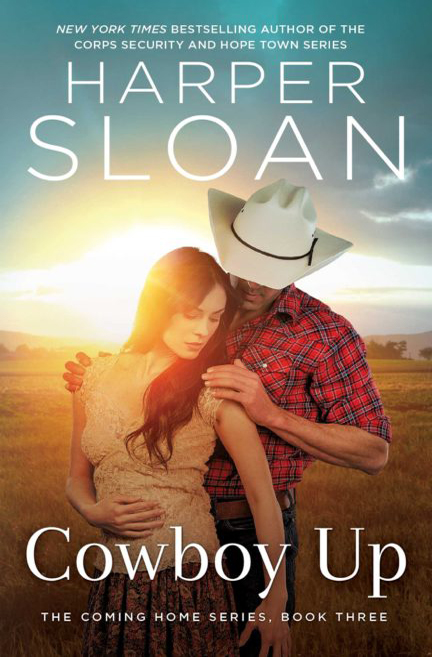 Hang on to your Stetsons, because you’re in for another wild ride! COWBOY UP by New York Times and USA TODAY bestselling author Harper Sloan is a passionate and breathless romance about the sparks that ignite when a cautious cowboy and a once-scorned woman open up to each other in the third installment of the Coming Home series.

Don’t miss our RJ review on this amazing read! As the eldest Davis, Clayton has always tried to lead by example. He takes his job as head of the family businesses seriously, making sure the farm and auto shop are running smoothly—along with keeping an eye on his brother and sister. For him, there’s a time and place to let go of the control he holds with an iron grip. And with the way he grew up, coupled with disastrous end to his last relationship, he’s just fine with his quiet, solitary life.

Most of the time.

What he hadn’t counted on was cute, quirky, shy bookstore owner, Caroline Michaels. She’s the proverbial woman next door—well, the next town over, that is. Caroline hasn’t lived an easy life, but after escaping an abusive ex, she’s finally living it for herself. The last thing she ever expected was a one-night stand with Clay Davis, a night she can’t stop thinking about.

So when she falls on hard times and Clay comes out of nowhere to her rescue, she realizes just how impossible it’ll be to stay away from him. Now all she has to do is convince him to live a little…

Will Clay be able to give up the reins and finally settle down? And, more importantly, will Caroline muster enough courage to lasso him up?

COWBOY UP is the third go-round in this Texas-set series which has everything readers could want in truly authentic Western romance novels filled with sizzle, heart…and plenty of horses and cowboy boots!

Praise for The Coming Home Series:

“Sloan…hits it out of the park…Maverick is a perfect hero: multilayered, complicated, deeply damaged, yet blooming with the new promise of love. Leighton is appealing and real, as are a strong supporting cast of characters whom readers will be glad to follow into sequels. Sloan enhances the gripping story with country songs that open each chapter. This absolutely spectacular effort catapults Sloan to the top of her genre.”

“A supersexy second-chance read with a handsome ex-rodeo cowboy hero and the girl he left behind. The characters are well written and the bedroom scenes are hot. . . . Sloan does a wonderful job with portraying the secondary characters, and it looks like Quinn’s story, which is next up, is going to be a good one.”

“Sloan brings plenty of heat to this otherwise very thoughtful, building love story, the first in her Coming Home series…Maverick’s pursuit of Leighton and her slow acceptance ignites the vivid ranch and small-town settings. Contemporary western romances are challenging to write, and Sloan makes it fun to read about realistic ways cowboys can fit into modern society. Readers will look forward to learning how the uncovered family secrets affect siblings Clay and Quinn in future books.”

Harper Sloan is the New York Times and USA Today bestselling author of the Corps Security and Hope Town series. She started using writing as a way to unwind when the house went to sleep at night. Harper lives in Georgia with her family. Visit her at AuthorHarperSloan.com or Facebook.com/HarperSloanBooks.