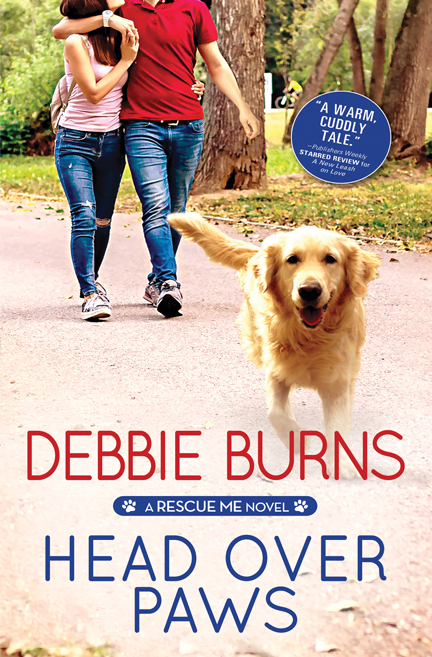 HEAD OVER PAWS by Debbie Burns.

Veterinarian Gabe Wentworth, former EMT and firefighter, is also heading to the rescue site and reluctantly agrees to pick up Olivia on the way. After a bad breakup, Gabe’s embraced the hermit life. When he meets Olivia, he can’t deny their irresistible mutual attraction, and his first thought is to run the other direction. Who rescued who? Love can lead to your forever home in this charming contemporary romance from best-selling author Debbie Burns.

Veterinarian Gabe Wentworth, former EMT and firefighter, is also heading to the rescue site and reluctantly agrees to pick up Olivia on the way. After a bad breakup, Gabe’s embraced the hermit life. When he meets Olivia, he can’t deny their irresistible mutual attraction, and his first thought is to run the other direction. But then the two band together in a risky maneuver to save a beautiful abandoned dog from rising floodwaters. The more Gabe learns about the woman who would risk everything to save vulnerable animals, the more he realizes what he might be willing to risk…

Olive and Gabe spotted the house at the same time.

“If we’re too late…” She swallowed back the rest. They weren’t too late. They were right on time. It couldn’t be any other way.

Gabe’s tires skidded to a halt on the wet gravel driveway. The teens who’d spotted the dog were nowhere in sight. Olivia grabbed the bolt cutters and hopped out into the rain. The soft gurgle of rushing water made the hair on the back of her neck and arms stand on end. Gabe jogged around to the back of the truck, and in the space of a minute, he had a tightly wound rope slung over his shoulder, a set of gloves shoved into his back pocket, and an ax and a jumbled mass of nylon in one hand.

As they headed along the side of the house, his free hand locked around her elbow. “Look, I don’t want to come off sounding like a macho prick, but there’s no trusting floodwater, not the current, not what it carries. So, if I don’t like the look of things, I’m going to ask you to hang back. I’d appreciate it if you’d trust me. I don’t want to have to choose between saving a dog and saving you.”

Electricity raced up her arm at the gentle strength in his grip, and his words struck a chord. She was a good swimmer, but she’d never swum in a current before. “Okay. You say it like you have experience in floodwater.”

“Technically, I do. Ten hours of water rescue training and one real-time rescue.”

Olivia started to ask him what he meant, but they’d rounded the corner of the house, and her heart lurched into her throat. A hundred or so feet out in the rushing, choppy water there was a dog pen attached to a small, rotted shed. From the creaks and groans emanating from it, the shed was on the verge of collapsing from the massive pressure of the water rushing into and past it.

Inside the pen, a large liver-brown and spotted-white hound balanced precariously atop a nearly submerged doghouse that must have been swept by the pressure of the water into the far corner. He was standing on all fours, his gangly legs balancing on the half-hexagon roof, his tail tucked tightly between his legs, and his head bowed low. The dog let out a giant bay that stabbed straight into Olivia’s heart.

“Water moving this fast has undercurrents, and you never know when you’re going to step into a strong one.” Gabe’s free hand locked around Olivia’s arm another a second or two. “Would you stay back and hold the rope for me? We could use that tree as a pivot joint.”

Olivia frowned. If she went in and the water knocked her off her feet, four years of high-school swim team might enable her to reach the pen, but there’d be no carrying out a dog that size through the water. She was willing to bet he was seventy or eighty pounds. Pushing through rushing water while holding a gangly, heavy dog would be a challenge even for Gabe, and he probably had half a foot of height and fifty pounds on her.

It was Olivia’s turn to squeeze Gabe’s arm, and even in the stress of the moment, some instinctive part of her responded to the solid feel of his biceps. “Just promise not to get into anything you can’t handle.”

“I’ll do my best.” He pulled out the gloves tucked into his back pocket and offered them to her along with the rope. “You’ll need gloves to hold the rope if I end up fighting with that water.”

The dog let out a series of long bays. To Olivia’s horror, she realized the water was close to tipping the doghouse over right underneath him. It was knocking back and forth against the metal fence of the pen from the pressure of the water. Dogs can swim, Olivia told herself over and over. They’re great swimmers. Even if it tips, he’ll be fine till Gabe reaches him.

Olivia tugged on the several-sizes-too-big gloves as Gabe threaded one end of the long rope through the belt loops of his jeans. His cotton shirt was lifted in the process, exposing an inch or two of remarkably defined obliques and a pronounced vee disappearing into his jeans and sending a wash of saliva over the back of Olivia’s mouth.

When finished, he hooked the backpack-looking strap over his shoulders. Just before he tugged a red-handled pull poking out from its left tip, Olivia realized it was a self-inflating life jacket, just a much slimmer one than the bulky Styrofoam-filled floaty she’d worn strapped around her on float trips as a kid.

Before she realized she was doing it, she leaned forward and pressed a kiss onto his cheek. “Be safe.” Certain her face betrayed the easygoing demeanor she hoped to portray, she flushed tomato-red. She could feel the heat of it lighting her skin.

His hazel-green eyes locked on hers for a single second, then he turned and took off down the yard, leaving Olivia to unwind the rope and pivot it around a relatively young but sturdy-looking tree not far out of the water.

“Water’s damn cold for late March,” Gabe said when he was a few feet in. The brown water parted around his legs, rippling in a heart-shaped wave and forming soft bubbles against his jeans.

A large, floating branch struck the shed with a solid whack, bounced against it for a few seconds, then was swept away by the water.

She wanted to keep watching, but Gabe was pushing through the water fast enough that she needed to focus on unwinding the rope and providing him with the right amount of slack. A quick glance showed he was fifteen or twenty feet in, and the water was already over his knees. He still had a long way to go before he reached the dog. As a rush of fear pressed over her, all Olivia could think to do was pray harder than she’d prayed in a long time.

Debbie Burns is an award-winning author and 2019 HOLT Medallion Award of Merit recipient. Her highly praised Rescue Me romance series features happily ever afters of the two and four-legged kind. She lives in Saint Louis in a gingerbread house that’s almost cute enough to eat. In her free time, you can find her enjoying time with her two teens, two phenomenal rescue dogs, and a somewhat tetchy Maine Coon cat who everyone loves anyway.