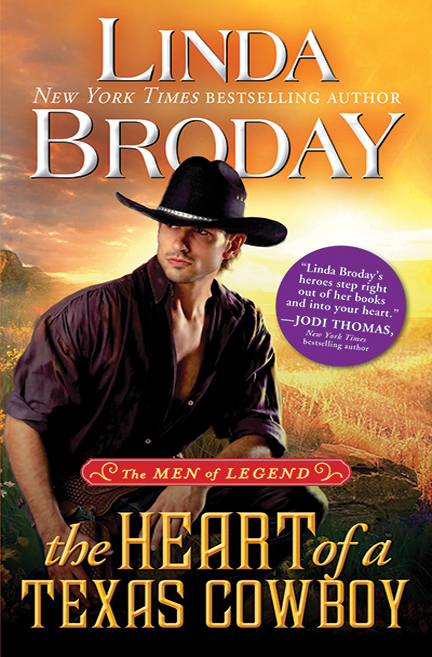 One bullet is all it takes to shatter Houston Legend’s world. He swore he’d never love again, but with the future of the Lone Star Ranch on the line, he finds himself at the altar promising to love and cherish a woman he’s never met—a woman whose vulnerable beauty touches his heart. Title: The Heart of a Texas Cowboy

The MEN of LEGEND

One bullet is all it takes to shatter Houston Legend’s world. He swore he’d never love again, but with the future of the Lone Star Ranch on the line, he finds himself at the altar promising to love and cherish a woman he’s never met—a woman whose vulnerable beauty touches his heart.

All Lara Boone wants is a name for her baby. She never expected to fall in love with her own husband—or any man—after the heartache she’s endured. Yet when her troubled past catches up with them, Houston will move heaven and earth to protect his bride…and discover depths to a marriage of convenience neither realized could be theirs.

With night wrapped around her like a cloak, Lara hummed while she washed the dishes and put everything away.

Houston sat on the ground with Gracie, his back against his saddle. The babe lay on his chest with his hand patting the small back. He caught Lara looking and winked as boldly as some scoundrel. Heat rose to her cheeks. She lowered her gaze and made quick work of the dishes.

“Do you want me to take Gracie to her bed?” Lara asked, joining him.

“If you can pry open her fist to get my vest out of it. For such a little thing, she’s sure got a grip.”

Houston was so near his soft breath fanned her cheek. Her pulse raced. This man she’d married invaded every thought. He’d shown kindness and caring and brought hope back from the grave where she’d buried it.

“I’ll only be in camp a little while,” Houston said, yawning. “Have to spell the other drovers.” At her questioning glance, he explained, “Everyone shares guard duty, me included.”

She nodded and hurried to lay Gracie in her crib next to her crib beside the chuck wagon. With her precious daughter sleeping soundly, she returned to the fire to find no sign of Houston. Her heart sank with disappointment. She’d missed him, missed her goodnight kiss that he’d begged for.

Houston called quietly from the deep shadows. “Over here, Lara.”

Following his voice, Lara discovered him leaning against the trunk of a mesquite tree. Rays from the full moon lightened the dark brown strands nestling against his collar, adding glints of silver.

“I didn’t want to take a chance on us being interrupted so I walked out here,” he explained.

Lara wet her lips. “I thought you’d changed your mind.” That he didn’t want to kiss a woman so scarred.

“Not a chance, lady,” he growled low and pushed away from the tree. “It’s all that’s been on my mind since you agreed.”

When she moved to him, he opened his arms. She walked into his embrace as though it was door and pleasure awaited there. Inhaling the scented air, she laid her head against the hard wall of his chest. She wanted to stay there forever.

Houston lightly rested his chin on the top of her head. “I’m real glad you came on this drive. Nights can get lonely out here.”

His deep voice vibrated inside her. It was like he became part of her. “I’m glad I did too. Even though I had to work to convince you.”

He put a finger under her chin and lifted her face. Without a word, he lowered his mouth. The minute his warm lips touched hers, Lara had to clutch his arm to keep from falling. Her heartbeat pounded as though trying to keep up with the blood racing through her veins.

A hot, demanding, achiness swept over her. She needed this man and at the moment didn’t think she could live without him. Nor did she want to try.

With a low cry, he placed his large hands under her jaw and deepened the kiss, sending a series of quickenings into her stomach similar to the ones she felt when Gracie curled in her womb. Maybe these stirrings signaled life much in the same way her baby’s movements did to let her know she was alive and couldn’t wait to be born.

Maybe she was being reborn.

Maybe she could forget the past and start fresh.

Maybe this was what she’d waited so long for.

As she leaned into him and gripped Houston’s vest, pleasure like she’d never felt swirled inside her. She clung to him afraid if she let go, he’d vanish and she’d discover it was a dream.

Could this be tiny stirrings of love?

Lara suddenly pushed away. No it wasn’t love because that didn’t exist. Not for her. It was too dangerous to believe in love. To believe she had anything to give any man.

What’s wrong, Lara?” Houston gently pushed back her hair. “Did I do something to upset or frighten you? I shouldn’t have grabbed you like that.”

“You did nothing wrong.” It was her. She almost let herself believe that someone could love her. One look at her reflection showed the impossibility of such a thing. “I’m sorry,” she murmured brokenly.

Through tears, she stumbled back to the light of the campfire, escaping all that brought pain.

Escaping everything. If only it was that easy.

Houston stole up behind her and touched her shoulder. “Talk to me. I want to understand.”

She owed him some explanation. Impatiently dashing away the tears, she turned and let anger spill. “It’s not you, Houston. It’s me. I’m broken. Too broken to fix. You can’t repair something that’s missing the pieces. Blackstone took a lot more than….” she paused, “He stole….”

“Your soul,” he supplied quietly. At a young age, LINDA BRODAY discovered a love for storytelling, history, and anything pertaining to the Old West. Cowboys fascinate her. There’s something about Stetsons, boots, and tall rugged cowboys that get her fired up. A New York Times and USA Today bestselling author, Linda has won many awards, including the prestigious National Readers’ Choice Award and the Texas Gold Award. She resides in the Texas Panhandle and is inspired every day.