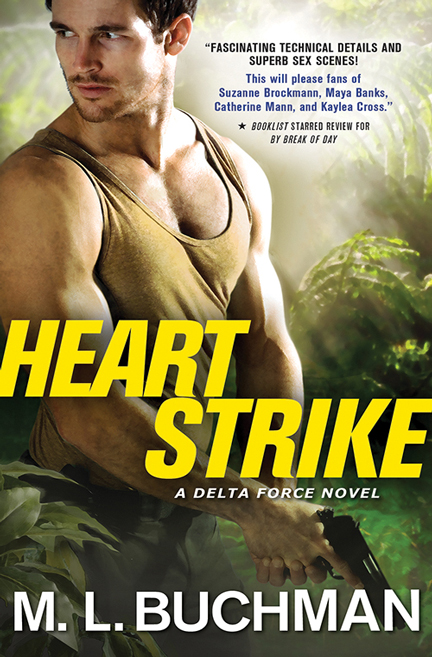 Rescued from an icy mountaintop by a Delta operative, Melissa Moore has never met a challenge she can’t conquer. Not only she will make Delta Force, she will be the best female warrior in The Unit, and woe to anyone who says otherwise. Technical wizard Richie Goldman is Bond’s “Q” turned warrior. A genius about everything except women, he takes point on the team’s most dangerous mission yet… SERGEANT RICHIE “Q” GOLDMAN: The smartest soldier on any team

SERGEANT MELISSA “THE CAT” MOORE: Newest on the team, determined to be the best

Rescued from an icy mountaintop by a Delta operative, Melissa Moore has never met a challenge she can’t conquer. Not only she will make Delta Force, she will be the best female warrior in The Unit, and woe to anyone who says otherwise. Technical wizard Richie Goldman is Bond’s “Q” turned warrior. A genius about everything except women, he takes point on the team’s most dangerous mission yet. When the Delta Force team goes undercover in the depths of the Colombian jungle, surviving attacks from every side requires that Richie and Melissa strike right at the heart of the matter…and come out with their own hearts intact.

“No, seriously, I don’t know what role I fill in a team’s structure.” And Melissa felt even more awkward for repeating it. She’d been trained well enough to walk into a city alone, extract or remove a target, and disappear with no one the wiser. But her only specialty in OTC had been coercing a group of nonconformists to function as a well-oiled machine. As that was clearly Kyle’s role in this team, she decided against bringing that up.

Outside of that one skill, she could use explosives, but she wasn’t a breacher. She could easily cover for a med or comm tech, but she’d never been focused on either. Mutt had been a hell of a breacher and Jeff a top paramedic. All Delta were good shooters, but she wasn’t a sniper. She was… Melissa honestly didn’t know.

“Including Spanish, I hope.” Carla sighed from where she sat with her back against one arm of the other sofa with her bare legs draped over Kyle’s lap. “Or you’re gonna be a real pain in the ass.”

“Richie has seven.” Carla put it down as a challenge.

“Four,” Richie corrected her. “Six if you count both English and bad English.”

“Wasn’t that a great movie?” Richie’s smile went brilliant and for a moment she wondered just how alone he’d been to light up so. Or was that something he simply did in the joy of a moment? Either way, she could definitely relate to the movie. Then they both looked around the room and the four others were looking at them blankly. He leaned in close. “Don’t mind them. They’re total heathens when it comes to good film.”

Calling The Fifth Element good film was something of a stretch, but it had been filled with any number of good one-liners.

Richie started tapping out the diva’s aria with a couple of small screwdrivers on the coffee table’s surface.

“I made it through OTC yesterday,” Melissa continued to the room at large. “Which means I haven’t slept in a seriously long time.”

That got her groans of sympathy and a little drum roll finish from Richie.

“That would be me.” Carla made it sound like a brag. But by the others’ nods, Melissa could see that it wasn’t.

“She was afraid you were coming in to take over the team,” Richie told her. Mr. Techie was acting as interpreter for what was going on. While it was odd, she appreciated knowing the subtext of the dynamics, and was especially glad she hadn’t mentioned her typical leadership role. “She’s also much nicer when she hasn’t been caged up in a hotel room in a city for a week.”

“It’s been less than twenty-four hours,” Chad offered with a hard-suffering sigh. “It only feels like a week.” He was being outwardly charming, but he was so transparent that she wondered if he ever succeeded with his act. Were women really that desperate?

Hopefully she hadn’t ever been.

Far stranger would be Carla Anderson having even a sliver of nice. Melissa would believe that when she saw it. “I’m a good hiker in any terrain.”

Melissa was starting to take Carla’s jibes personally and had to remind herself that Carla had admitted she was a bitch. Well, Melissa might be Canadian, but she could bitch right back.

“Number One in every hike or march event from the first day of Delta Selection.”

“That,” Kyle said and patted his wife’s knee to stop her before she could speak, “would be me.”

“Except once,” Carla insisted.

“Except once,” he agreed. Kyle was as amiable as she was prickly. Did that balance them out to make them one complete person, or were they always bro and bitch to the team?

“I walked his ass into the ground on the forty-miler.”

Melissa looked at her again.

It was the final exercise of Delta Selection before the Commander’s Review Board. After thirty brutal days of endless hikes and orienteering, it all came down to that moment. An individual—with a bloody heavy pack—crossing forty miles of mountainous, trackless forest at night with a compass and a flashlight. After thirty days of tests and challenges thinning the class, that one hike had still cut the remaining quarter of her class in half again. And it had nearly killed her to hold her lead. Her strength wasn’t actually hiking under a heavy load; it was that all of her years of backcountry hiking had made her exceptional at orienteering. Add that to her ability to visualize a topo map like a museum exhibit laid out before her and she never wasted a step.

Carla was not that tall a woman and her legs weren’t long and sinewy. Below the hem of her dress, they looked like the legs of a workout queen, not someone who had walked everyone else into the ground on such a brutal hike. That meant a lot about what had driven her to succeed.

Carla being a cast-iron bitch probably covered it.

“That’s impressive,” Melissa finally offered, not knowing what else to say.

“Warned you.” Carla tapped her own chest. “Total bitch.”

“And mind reader,” Melissa agreed as pleasantly as she could.

Richie snorted out a laugh.

M. L. Buchman has over 35 novels and an ever-expanding flock of short stories in print. His military romantic suspense books have been named Barnes & Noble and NPR “Top 5 of the year,” Booklist “Top 10 of the Year,” and RT “Top 10 Romantic Suspense of the Year.” In addition to romantic suspense, he also writes contemporaries, thrillers, and fantasy and science fiction.

In among his career as a corporate project manager he has: rebuilt and single-handed a fifty-foot sailboat, both flown and jumped out of airplanes, designed and built two houses, and bicycled solo around the world.

He is now a full-time writer, living on the Oregon Coast with his beloved wife. He is constantly amazed at what you can do with a degree in Geophysics. You may keep up with his writing at www.mlbuchman.com.