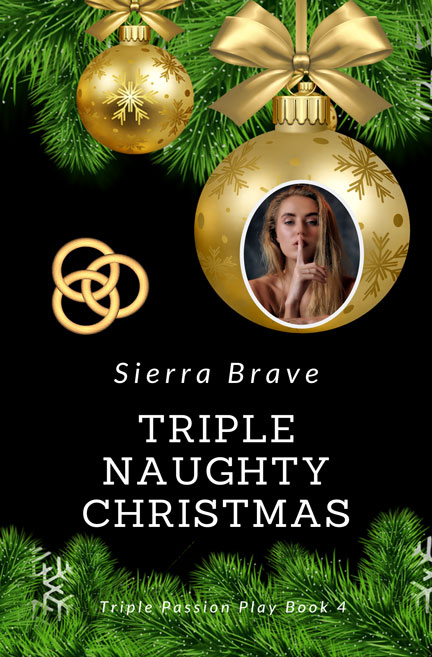 In Sierra Brave’s TRIPLE NAUGHTY CHRISTMAS, Trisha, Tommy, and Ken are pleased with the quiet, comfortable life they’ve built together but are disturbed to learn the novelty of their three-way union still hasn’t worn off for some members of their community even after nearly two decades. A last-minute decision to attend a neighborhood Christmas party could be the trio’s undoing. The opportunity to set the record straight is there for the taking but actions speak louder than words and temptation is all around them.

Two husbands, four kids, a gaggle of nosy neighbors, a car accident, the best present ever, a naughty party, and a mother-in-law expected for Christmas. How will Trisha ever pull it off? Navigating the Yuletide season can be a challenge for anyone but after hosting their family Christmas celebration for more than fifteen years, forty-something mom, Trisha Marks-Davidson, believes she’s conquered Santa and tamed all of his reindeer. Anything but ordinary, Trisha’s family of seven consists of herself, her two husbands, Tommy and Ken, and their four kids. Despite their unusual situation, she’s cultivated a system for a fun-filled holiday packed with their own special traditions.

Trisha, Tommy, and Ken are pleased with the quiet, comfortable life they’ve built together but are disturbed to learn the novelty of their three-way union still hasn’t worn off for some members of their community even after nearly two decades. A last-minute decision to attend a neighborhood Christmas party could be the trio’s undoing. The opportunity to set the record straight is there for the taking but actions speak louder than words and temptation is all around them.

Although reading any of the previous books in the Triple Passion Play series would add to your enjoyment, Triple Naughty Christmas can be read as a stand-alone, HEA story.

Warning: This book contains graphic language and sexual situations, homosexuality as well as a positive depiction of a bisexual poly-relationship. If you will be offended, please do not read.

As soon as she breached the threshold of the main room, loud moans resonated through the music, and the meaning of the sign on the door to the basement entrance became clear. They were at a swinger’s party. There were only about fifteen to twenty other people in the room besides her and her husbands, and many of them were in various stages of undress. A table close to the entrance held a large bowl of condoms and a collection of sex toys. A mattress on the floor made-up with red silk sheets and lots of pillows served as a hotbed of sexual activity. Trisha’s first instinct was to grab her men and run out of there but curiosity and her desire not to look like an idiot who lives with two men but bolts like a frightened rabbit at the first sign of an erotic display, kept her feet planted.

“The bar is over there.” Sophie pointed out the obvious. “We have draft beer and bottles, wine or the bartender can make you a cocktail if you prefer. He’s a member too.”

“Here.” Trisha looked around with wide eyes as she absently held up the bag containing the bottle of wine. “This is for you.”

“How sweet! Thank you.” Sophie accepted the gift. “I want to introduce you to some of my friends.” The redhead turned her attention to Trisha’s husbands, who were practically cowering by the condom bowl. “You guys can mingle a minute, right. I’m going to steal her for a bit. Have fun!”

As she allowed the mother of her daughter’s friend to drag her along, Trisha tossed a look back at Ken and Thomas she hoped they’d recognize as: Don’t you dare.

Sophie brought her over to a round table where a candle burning in the middle added some extra visibility, illuminating the faces of the two women seated there. One of the ladies, a tall, middle-aged brunette sat sideways, showing off her long, shapely legs as she crossed one over the other. She had a great body, but her countenance suffered due to the pucker lines around her mouth and her pronounced crow’s feet. Trisha couldn’t place her, but she recognized her from somewhere.

“Do you have a kid at East Elementary?” The woman asked before Sophie got around to introducing them, being too busy retrieving a corkscrew to open the wine Trisha brought.

Trisha could feel her cheeks growing warm and red. The last thing Trisha wanted to do was discuss her kids at a sex party. “Why?”

“Sherry, ixnay on the ids-a,” The other dark-haired woman at the table tried her hand at pig Latin, “You know the rules—no talk of the little ones. It kills the mood.”

“Sorry, I know. It’s just, you look familiar. I’m the cafeteria manager there.” Sherry looked Trisha up and down as she spoke, her eyes lingering on her breasts. Trisha smiled and nodded at the woman’s explanation without commenting on her own family.

“Now don’t go frightening my girl away, Sherry.” Sophie chuckled as she slipped a necklace of red beds around Trisha’s neck. “Red means stop. No one will go after you until you take them off.” After placing an arm around Trisha, Sophie rubbed her hip. Trisha tensed, her tummy turning a flip.

“This beauty is Trisha, and both of those two hotties over there are hers.” Sophie’s thick eyebrows lifted way up on her forehead as she gestured to Ken and Thomas at the bar.

A dark-haired woman whistled in admiration. She was an exotic-looking beauty, likely Hispanic, with a tan skin tone and big, brown eyes. Her features were perfectly spaced with high cheekbones and full lips. Her unbuttoned blouse revealed a red, lace bra, and her messy hair radiated an aura screaming she’d recently been fucked.

“I’m Regina.” The beautiful lady held Trisha in her gaze as Sophie filled her glass with her free hand. Trisha extended her hand and her new acquaintance shook it firmly.

“Regina’s a personal trainer.” Sophie’s voice resonated in Trisha’s ear as she waited for Regina to let go of her. “Her boyfriend is my husband’s law partner.” Regina began to caress Trisha’s fingers with her thumb.

“So how does it work? Do you alternate nights or does one of them travel a lot?” Sherry jumped right in with the invasive questions, ready to settle her curiosity.

“Um, well,” Trisha removed her hand from Regina’s grasp as she attempted to control her nerves while adjusting to the uncomfortable situation. The blunt question had thrown her off guard. Just breath. Just breath. What do you care? You’re not ashamed. She took a deep breath, clutching her hands together. “Tommy travels quite a bit, but it’s not like that.”

“Well…how is it?” Sherry leaned forward her irises fully visible as she fixed her attention on Trisha while biting down on her bottom lip. Trisha glanced at Sophie for help, but judging by her expression, she was dying to know as well. Other books in the Triple Passion Play series: Can love between three survive?

The Power of Three

One Response to Heat Up Your Holiday! Triple Naughty Christmas by Sierra Brave