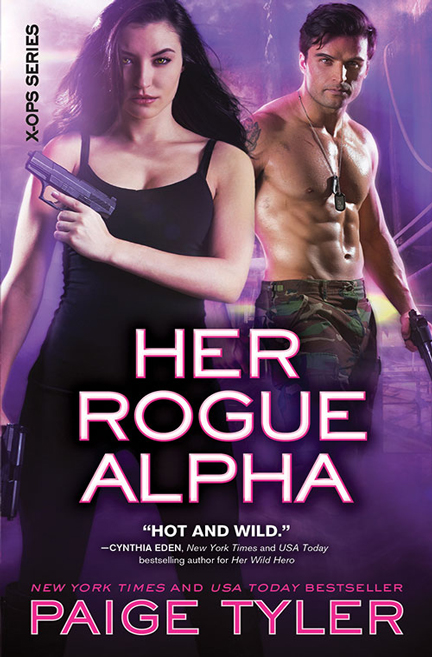 HER ROGUE ALPHA–Exclusive Excerpt!  Former Special Forces Lieutenant Jayson Harmon can’t believe that his war scars don’t matter to beautiful feline shifter Layla Halliwell. Why would she saddle herself with a broken man? By this point in the book, the hero, Jayson Harmon, a wounded Special Forces lieutenant, has taken an experimental serum that’s not only supposed to heal his injuries, but give him shifter-like qualities. Whether the serum has done either of those things is anyone’s guess, but at least it’s brought him and his feline shifter girlfriend and newest Department of Covert Ops agent Layla Halliwell closer together. They’re currently on a mission in Ukraine to rescue the Russian girlfriend of a US ambassador’s son as well as a handful of other young women who have been kidnapped. It’s been a long time since Jayson has led people into combat, and while he hopes to make it out of this without having to engage in a battle with the bad guys, he can’t help but think about the last time he’d done it when he was in Special Forces, and how disastrous it was. Layla and the group of teenagers are following his lead, though. He only prays he can keep them all safe.

Jayson turned his attention back to the drawing and was just starting come up with a plan for breaking into Zolnerov’s estate when Dylan and Mikhail jogged down the rubble- filled steps. The two teens reached into the gray sports duffel that Mikhail had been carrying and came out with three boxes of 9x18mm ammo for their pistols, and two boxes of 5.45mm cartridges for his AK- 74. Two thirty- round boxes of ammo for an automatic weapon wasn’t much, but then again, if he ended up having to shoot that many rounds, it meant they were in deep shit and were probably screwed anyway. With what he already had, it should be enough.

Mikhail dumped the boxes on the desk to the side of Olek and Layla’s drawing, then pulled out three battered and abused-looking Makarov pistols and placed them on the table too.

“What are those?” Jayson asked as he saw Layla look at the weapons from the corner of her eye.

“Those are Makarov pistols,” Mikhail said.

Jayson arched a brow, wondering if the Russian kid was trying to be a smart-ass or if he were just clueless. “No shit. The question is why do you have them? I sent you out for ammo, not more weapons.”

Dylan was the one who answered. “They pretty much came with the ammo. This might be a big town, but word gets around. People have heard about what we’re trying to do, and when we talked to one of Victor’s friends about needing ammo, he gave us the weapons too.”

“He said he knows one of the missing girls.” Mikhail shrugged. “He just wanted to help.”

Jayson opened his mouth to tell them to ditch the weapons, but Dylan interrupted. “Look, I know you don’t want us getting involved in any shooting, but we may not have a choice. What we’re doing is going to be dangerous, no matter how much you try to protect us.”

Jayson glanced at Layla to see her regarding him with a questioning look. Clearly, she was going to leave this up to him. The ultimate in go ask your father, he supposed.

His gut was shouting at him to leave the kids out of this, that they weren’t old enough to risk their lives in a shoot-out, but he didn’t have the right to make that decision for them. Dylan was going to do whatever was necessary to get Anya back, and Olek was going to help. As for Mikhail, he’d been risking his life against these people for a long time now. Jayson couldn’t change the circumstances or the danger the three teens were in. The best he could do was try to manage the situation and reduce the risk to the lowest level possible. But no matter what he did, things could still go wrong. If it did, these kids had to be able to defend themselves.

“Okay,” he said. “You keep the weapons. But you fire them only as a last resort. Understood?” All three of them nodded in return.

“What’s the plan?” Dylan asked. “How are we going to get Anya and the other girls out?”

Jayson readjusted the flashlight until it shone fully on the drawing of Zolnerov’s residence. The main house seemed like a cross between a Tuscan villa and an American ranch with a multifloor structure in the middle and single- floor wings spreading out to either side. If Layla’s drawing was to scale—and Jayson had no reason to think it wasn’t—the place was easily ten thousand square feet. And that wasn’t counting the outlying buildings or the smaller structures set at various places along the perimeter wall that served as guard shacks.

“Dylan, you’ll be out on the road in front of the villa with Mikhail and Olek. When I give the signal, I need the three of you to draw the attention of the militia soldiers in that direction. I’m not sure how you’re going to do that, but I need as many guards heading that way as possible. You just need to keep them occupied for a few minutes. Then I want the three of you to bail.” Jayson pointed at an intersection on the map about a quarter mile from the gate. “Fall back to this road junction here and hide.”

Dylan glanced at Mikhail and Olek. It was obvious that none of them liked the idea of hiding, but after a moment, they nodded.

“I might know some other people who can help us,” Mikhail said. “We’ll be the distraction you need. What are you and Layla going to do once we get the soldiers moving our way?”

“Layla and I will be going in over the perimeter wall in the back of the property,” Jayson said. “We’ll find Anya and the other girls, then get them out over that same wall.”

Mikhail frowned. “That is a very big house. How will you be able to find Anya in time? Even with a distraction, you probably won’t have more than five or ten minutes.”

Jayson didn’t point out that Mikhail was probably being optimistic with how much time they’d have. “That’s Layla’s department. But to find Anya, she’s going to need that scarf you’ve been carrying around, Dylan.”

Dylan looked as confused as the other two teens, but he reached inside his coat and pulled the piece of colorful material out, handing to Layla. “I don’t understand why you need this, but please bring it back. It’s Anya’s favorite. It’s pretty important to me too.”

Layla nodded solemnly. “We will. I promise.”

Jayson looked at the tense and worried faces around the table. “I won’t lie and say this is going to be easy. Or that it’s not dangerous. But I promise, if we all stick together and have faith in each other, we’re going to find Anya and those other girls, and we’re going to get them out alive.”

At his words, everyone at the table stood up a little straighter. Jayson was stunned at the trust and belief in their eyes—Layla’s as much as any of the others. He only hoped he was able to live up to that kind of trust. They might have survived the short raid on the RSA building, but his previous attempt at leading a combat mission had ended in disaster.

“All right, let’s get moving.” He rolled up the map Layla and Olek had made. “It’s going to take us a while to get out there, and I need time to check the place out in person before we go in.”

The teens immediately headed for the stairs, but Layla hung back with him. Jayson clicked off the flashlight, plunging the old library into darkness. Layla could still see of course, and she reached out to take his hand.

“We’re going to do this,” she whispered softly. “Together.”

He squeezed her hand. “Together.”

HE’LL DO ANYTHING FOR HER

Former Special Forces Lieutenant Jayson Harmon can’t believe that his war scars don’t matter to beautiful feline shifter Layla Halliwell. Why would she saddle herself with a broken man?