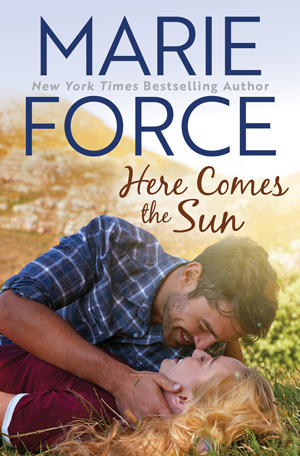 Wade Abbott is one and done.

One look, one conversation, one weekend, and he knows who he wants.

Except, Mia Simpson is not free to return his affection. In fact, he suspects she’s in an abusive marriage, but she never confirms that, and he has no choice but to mind his own business where she’s concerned.

Two years after they first met and a year after he last heard from her, Mia shows up half-frozen, bruised and beaten on his doorstep, needing something only Wade can provide.

He’s determined to make it work, no matter the cost. Grab the latest in a series you will fall in love with!

HERE COMES THE SUN by Marie Force is now LIVE!

An Excerpt from Here Comes the Sun

Wade walked into the conference room and wanted to turn around and walk right back out. The table had been set with placemats as if they were hosting a dinner party. On each placemat was a wide array of products, things normally used in the privacy of one’s bedroom and not laid out like a sexual buffet on the conference room table.

Will came in after him, took one look and groaned. “Do we hafta?”

“Maybe we should look into a nursing home for him. He is getting on in years.”

“I heard that, William,” Lincoln said when he came in. “And good luck with that plan.”

“I can’t sit in a room with my sisters and talk about sex toys,” Will said.

“Yes, you can. Think of them the same way you would anything else we carry—foot fungus cream or hemorrhoid remedies or yeast infection cures.”

“We don’t have to have special training for any of those products,” Will said.

“Um, I did,” Wade said. As director of health and wellness, he’d been trained in all the products offered in the store’s apothecary.

“Not with Charley in the room,” Will said of the more obnoxious of their three sisters.

“This product line has nothing to do with me,” Will said. “It’s not Vermont Made. Why do I have to be trained on it?”

“Very good question, Will,” Hunter said when he joined them. “I’m an accountant. Why do I need to know about this?”

“Because we’re going to have to train the sales team on the floor and at the distribution center,” Linc said, “so we need to be able to answer their questions. And we don’t ask anything of our employees that we aren’t willing to do ourselves.”

Most of their “sales team” were grandmothers who’d worked for the company for decades. The thought of indoctrinating them on this product line had given Wade nightmares for months. Fortunately, the contractor from the company that produced the line would be doing most of the heavy lifting. But he had to be in the room. He didn’t want to be in the room.

“I don’t work with the sales team,” Hunter said. “They won’t be asking me questions, so I don’t need to be in this meeting.”

“I never realized I’d raised such a bunch of prudes,” Linc said. “Where did your mother and I go wrong?”

Molly breezed into the conference room. “Are they being prudes, love?”

“You warned me they would be,” Linc said, accepting a kiss from his wife, who marched right over to one of the place settings and began picking up and examining the various objects. She pushed a button on one of them, and it roared to life, making her laugh.

“Oh, sit down and be quiet,” Molly said. “These things are going to generate revenue unlike anything we’ve ever seen. Think about the money you’ll get to count, Hunter. That always makes you happy.”

“Put that thing down, Mom,” Will said, “and never touch it again.”

Elmer came bustling in, stopping short at the sight of his daughter holding a phallic object. “Oh. Well. Here we go, then.”

“I’m the reason you’re here, young man, so I’ll remind you to mind your manners.”

“Are you providing counseling for those of us who’re going to be traumatized by this?” Will asked his father.

Elmer hit the power button on one of the devices, and it launched right out of his hand.

“It will be that bad,” Will said, slumping into a chair with Hunter next to him.

All together, her books have sold 6.5 million copies worldwide, have been translated into more than a dozen languages and have appeared on the New York Times bestseller list many times. She is also a USA Today and Wall Street Journal bestseller, a Speigel bestseller in Germany, a frequent speaker and publishing workshop presenter as well as a publisher through her Jack’s House Publishing romance imprint. She is a two-time nominee for the Romance Writers of America’s RITA® award for romance fiction.

Her goals in life are simple—to finish raising two happy, healthy, productive young adults, to keep writing books for as long as she possibly can and to never be on a flight that makes the news.