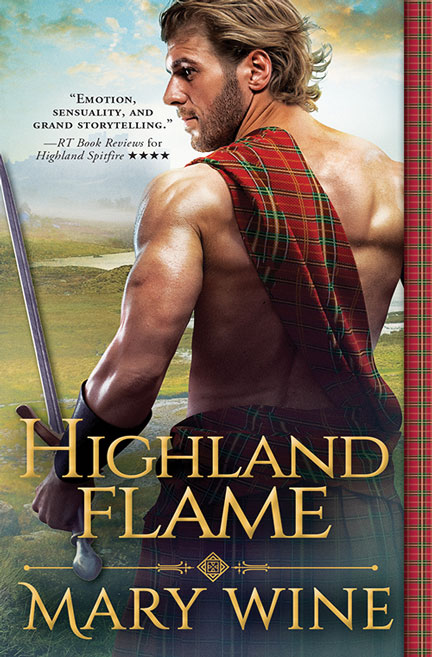 Laird Diocail Gordon has just inherited his uncle’s run down castle and rag-tag clan. He knows the sorry sight of the castle would send any woman running, but is determined to find a wife to help return his home to its former glory…

Historical facts you should know Laird Diocail Gordon has just inherited his uncle’s run down castle and rag-tag clan. He knows the sorry sight of the castle would send any woman running, but is determined to find a wife to help return his home to its former glory.

Widowed lady Jane Stanley is determined to return to England, even if she has to tromp through the Scottish Highlands on foot to get there. Her travels lead her straight into the midst of a troop of dangerous Highland warriors. The mysterious, brawny laird forbids his men to harm her, and the spark between them is immediate. The only way Diocail can keep her safe is to take her home with him, but will the miserable state of his clan douse her newly ignited Highland flame?

Later that night, once the business was finished, Diocail took a moment to sit. His men were roasting a few rabbits that had been given as rent, their conversation scarlet since they were well away from womenfolk.

He chuckled at one tale. The village they were visiting didn’t have an inn, just a rather

crude tavern. Many of the tenants who had come to pay their rent were camped nearby. The scent of their fires mixed as the evening breeze blew through, hinting at winter.

“Get your hands off of me!”

His men went silent, their jovial mood changing in an instant.

There was a sound of flesh hitting flesh and the sharp intake of breath from a female.

“Damned English bitch,” came a sharp reprimand. “Think ye’re too good for the likes of me? We’ll be seeing about that…”

A woman stumbled close enough to the light of the fire for Diocail to see her. Not that it was hard when all she wore was a linen smock splattered with dirt. The firelight shone right through the undergarment. In spite of her indecent condition, she faced off with the man bearing down on her, baring her teeth at him as she held up a thick stick.

“Try it and die,” she snarled at her attacker.

Diocail watched the way she lifted the branch high, ready to wield it like a club. Her would-be companion stumbled from the thicket she’d been in, staggering just a bit to betray how much whisky he’d had.

“Would ye rather freeze?” he demanded of her as he eyed her stance and weapon. “Why? Ye’re no virgin. A wee tumble is all I’m looking for. I’ll share me supper and fire with ye once ye ease the stiffness of me cock.”

But she was English. Her accent was as clear as the moon in the sky.

“Which makes her my concern,” Diocail interrupted.

The woman had been focused on the man chasing her. She jumped when Diocail spoke, whirling around to look at him. She masked her fear well, tightening her grip on her weapon as she tried to keep both him and her first attacker in her sights.

She had courage, he’d grant her that.

Even if it was foolish at the moment.

“Now why would ye be interfering in me fun?” the man demanded of Diocail. “Caught her sleeping on our land. That makes her a prize. Mine.”

“Yet ye have no’ caught her, and now she is mine.”

Diocail slid between her and the man, glad to see his men had joined him. There was a

sound from the woman, muffled as Muir clamped his hand over her mouth.

The man didn’t care for Diocail’s opinion on the matter. His eyes narrowed as he bared his teeth. Diocail reached into his doublet and withdrew a silver piece.

“Let us be agreed.” Diocail shook the coin so that the firelight caught on it. He watched as the man shifted his attention to the money, the glitter of lust in his eyes dying down. “Go find yerself more welcoming company, man.” He tossed the coin toward him.

The man caught the coin, turning it over a few times before holding it in his hand and trying to judge the weight. There was another sound from behind Diocail and then a grunt as one of his men misjudged the tenacity of the female. Whoever he was, there was a squeak from the woman as he applied enough strength to keep her still.

“Aye,” the man in front of Diocail said as he tucked the coin into his sporran. “But I think ye might be regretting paying so much for her. Cold English bitch will nae thank ye.”

He spat on the ground and sent a hard look toward the woman before he turned and left. Diocail waited until the sound of the man’s feet crunching the undergrowth faded before he turned to consider their newest companion.

Niven had his arms wrapped around her, one of his huge hands clapped over her lips. She glared at Diocail as he looked at her.

“Forgive me, mistress,” Diocail stated firmly. “Did ye wish me no’ to interfere then? I rather thought the way ye were threatening to hit him with that branch suggested ye were no’ very keen about accepting his offer. Of course, if I was wrong…”

Some of his men chuckled.

She blinked, clearly thinking the matter through. He watched her relax and shake her head.

She stepped away from Niven, casting a nervous look at the other men around her. Some of them couldn’t keep themselves from appraising her from head to toe. Diocail admitted fighting the urge himself. The fire cast enough light on her to make it plain she was a fetching female beneath her smock.

But she was not a whore, and he’d not gawk at her.

No, her courage deserved more respect than that.

True to what he suspected of her, she drew herself up, set her chin, and looked him in the

eye as though she stood there with a hundred men at her back to protect her. “You have my sincere gratitude, sir.”

“What are ye doing on me land?” He made his voice as gentle as possible. Now that he was closer, he saw the evidence of Fate turning ugly against her. Her toes were bleeding along with her knee. Her fine porcelain skin and high cheekbones were crisscrossed with tiny scrapes and cuts from the thicket, and there were deep circles under her eyes from lack of sleep.

She was hungry too.

He could see the way she fought to lick her lips now that she was close enough to smell the roasting rabbit from their fire.

And courage. She had an abundance of it, which Diocail respected because the only way to cultivate it was to face hardship.

“Who turned ye out in yer shift, lass?” Muir asked as she remained unwilling to share the details of her plight.

She cut Muir a quick glance but returned her attention to Diocail. “Does it truly matter how I came to be here?”