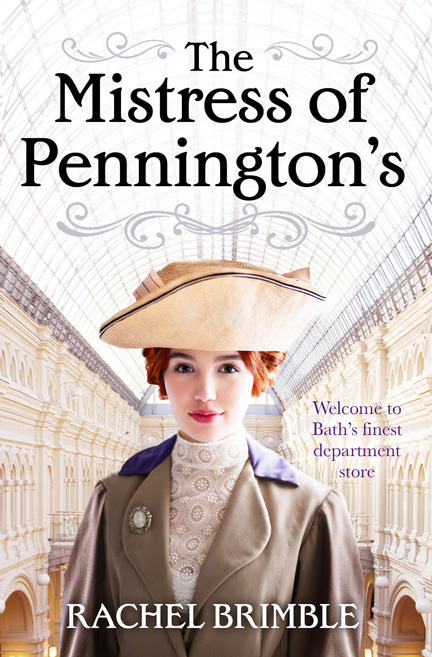 Historical research…how much? How little?

I often get asked how much research goes into my historical novels and I find this really difficult to answer. As I write saga/romance rather than historical fiction, I focus on the central relationship more than anything––the emotion. To my mind, the emotions of people during the 1700s, 1800s or 1900s would have been the same as today…even if their problems and concerns were entirely different.

Historical research…how much? How little?

I often get asked how much research goes into my historical novels and I find this really difficult to answer. As I write saga/romance rather than historical fiction, I focus on the central relationship more than anything––the emotion. To my mind, the emotions of people during the 1700s, 1800s or 1900s would have been the same as today…even if their problems and concerns were entirely different.

My research begins once I’ve decided on the theme of my book – for The Mistress of Pennington’s (book 1 in an ongoing Edwardian series) and, in fact, the entire series, the theme is female empowerment. So, what did this mean as far as research was concerned? The Edwardian era was a time of huge changes for women and I soon discovered there wasn’t just one way to discuss and illustrate female empowerment, but a whole host of ways. Which is why I knew early on I needed to write a series.

The heroine of The Mistress of Pennington’s is Elizabeth Pennington and her story formulated in my mind very quickly. Having loved The Paradise and Mr Selfridge, I desperately wanted to set the books in Bath’s finest department store. I wanted to create a whole cast of characters and share, not just their working lives, but their personal lives, too.

My research started with reading as many books, articles and newspaper clippings as I could about the beginnings of department stores in the States, France and the UK. I wanted to create a whole new department store. A store where the women were as ambitious as the men to climb the retail ladder. A dream that would’ve felt too far out of reach for some women, but not for Elizabeth.

Excited about the prospect of creating heroines intent on making a change in the world, I started to investigate the first women to succeed in business, the suffragette movement, divorce, science and education. I quickly became addicted and inspired by phenomenal women who I’d heard little or nothing about. The more I read, the more convinced I became that I’d found the theme for my next few books.

As Elizabeth is such a strong, forward-thinking and inspiring woman, I then needed to create a hero who would encourage rather than deter her ambition. A man with dreams and aspirations of his own…I soon found Joseph Carter and realised he was also carrying an ongoing wound that only Elizabeth could heal.

Research is imperative when starting a historical novel and much of what a writer reads and learns will not make the cut to the final book. Having said that, it’s important that the author knows his or her subject, that they can feel, taste, touch and see the sights and experiences of the period. I literally cannot wait for the release of future books in the Pennington’s series and watch how the female protagonists overcome obstacles and restrictions placed in front of their dreams.

The Mistress of Pennington’s is about the first women to succeed in business and, book 2, will cover the suffragette/suffragist movement. The Suffragette At Pennington’s is due for release January 2019 but, in the meantime, I hope you enjoy learning more about Elizabeth, Joseph and, of course, Pennington’s Department Store! 1910 – A compelling tale of female empowerment in Bath’s leading department store. Perfect for the fans of the TV series Mr Selfridge and The Paradise.

Elizabeth Pennington should be the rightful heir of Bath’s premier department store through her enterprising schemes and dogged hard work. Her father, Edward Pennington, believes his daughter lacks the business acumen to run his empire and is resolute a man will succeed him.

Determined to break from her father’s iron-clad hold and prove she is worthy of inheriting the store, Elizabeth forms an unlikely alliance with ambitious and charismatic master glove-maker Joseph Carter. United they forge forward to bring Pennington’s into a new decade, embracing woman’s equality and progression whilst trying not to mix business and pleasure.

Can this dream team thwart Edward Pennington’s plans for the store? Or will Edward prove himself an unshakeable force who will ultimately ruin both Elizabeth and Joseph?

He moved to walk away, and she reached for his arm before she could think just how dangerous such contact could be. He halted, and even when he looked at her fingers clutched on his forearm, she did not remove them. It suddenly felt important she touch him; that he understood she had care for what he said or asked her.

Even though the physical contact set her heart racing, she held her grasp. ‘Why do you ask me about your family?’

He closed his eyes and dropped his chin to his chest.

Disquiet whispered through her. What had caused such uncharacteristic hesitation in him?

‘Joseph…’ She slid her hand from his arm, ignoring the pang of loss that the break of contact brought. ‘If there’s something bothering you, please, share it with me.’

He slowly raised his head, his blue eyes full of irritation once more. ‘I will, but not here. Not on the street. I’d prefer to come to your office tomorrow.’

How was she supposed to wait until tomorrow? Her curiosity was rife. It was clear something had changed between them. Something, it seemed, of which she was the cause.

She nodded. ‘I’ll send a message to you first thing in the morning.’

‘Thank you. Until then, I bid you good day.’

He walked away, leaving Elizabeth with questions and words flailing on her tongue. She stared after him, fearful of the pull deep in her chest that Joseph’s concerns had somehow become hers. No good could come of such caring. Her only goal should be proving her worth and capability in Pennington’s and beyond. She could not allow one man, any man, to have such an effect on her.

She inhaled a long breath and walked towards Pennington’s doors. Rachel lives with her husband and two teenage daughters in a small town near Bath in the UK. Since 2007, she has had several novels published by small US presses, eight books published by Harlequin Superromance (Templeton Cove Stories) and four Victorian romances with eKensington/Lyrical.

In January 2018, she signed a four-book deal with Aria Fiction for a brand new Edwardian series set in Bath’s finest department store. The first book, The Mistress of Pennington’s released July 2018.

Rachel is a member of the Romantic Novelists Association and Romance Writers of America, and was selected to mentor the Superromance finalist of So You Think You Can Write 2014 contest. When she isn’t writing, you’ll find Rachel with her head in a book or walking the beautiful English countryside with her family. Her dream place to live is Bourton-on-the-Water in South West England.

She likes nothing more than connecting and chatting with her readers and fellow romance writers. Rachel would love to hear from you!

5 Responses to Historical Romance—How Much? How Little?