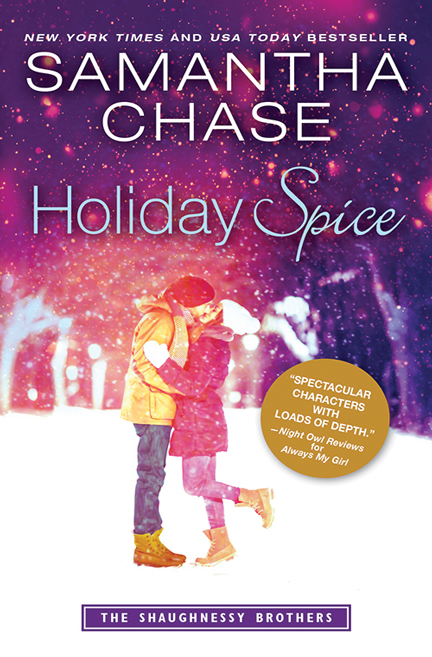 Darcy Shaughnessy has gotten used to her overbearing brothers chasing away any man she wants to date. But a chance meeting with a brooding – and deliciously handsome – artist is about to make this holiday season one to remember… As soon as the mistletoe goes up, that’s when life gets really interesting

Darcy Shaughnessy has gotten used to her overbearing brothers chasing away any man she wants to date. But a chance meeting with a brooding – and deliciously handsome – artist is about to make this holiday season one to remember.

There’s only one thing Benjamin Tanner loves more than his woodcarving: solitude. Then he gets snowed in with Darcy in his cozy cabin in the woods, and their heated feelings begin to melt the icy barrier between them.

With Ben’s need for privacy and Darcy’s love of family and social life, will opposites still attract once the snow clears and the holiday festivities come to an end?

This was not what he had planned.

But the instant Darcy’s lips touched his, Ben was lost. From the first time he’d laid eyes on her, he’d wondered how she’d feel in his arms.

From the first time he watched her move, he wanted to know how she’d feel moving against him.

From the first time he’d seen her smile, he wanted to know what her lips would feel like as he kissed her.

Now he knew. Sexy as hell.

His arms banded around her waist until he made sure there wasn’t even room for a breath between them. She went up on tiptoes to press even more intimately against him—which he totally appreciated—and it allowed his hands to linger and cup her denim-clad bottom.

And what a denim-clad bottom it was.

Gently, he squeezed it and even considered grabbing it harder and lifting her onto the counter, but he wasn’t ready to let go of the full-body contact just yet.

It was insanity. One minute, she was frustrating the hell out of him in a nonsexual way, and the next, he was so consumed with need for her that he almost didn’t recognize himself. This wasn’t the man he normally was. He didn’t pounce; he didn’t even think of initiating anything physical in a situation that was so mundane.

And breakfast was pretty mundane.

When Ben chose to sleep with a woman, there was, well, there was a certain protocol to it for him. There were the required three dates. There was the kiss good night that would build in heat over the course of the dates, and then it was normally at her house. Never here. Never in his bed. His home was just that—his. It was his sanctuary, and he was possessive of it. But right now, all he wanted—almost more than his next breath—was to have Darcy in his bed.

Another growl escaped before he could stop it.

For a moment, he allowed his lips to leave hers, because he was desperate to taste her in other places. His mouth trailed along the delicate line of her jaw, her throat, and up to nip at her ear, a spot he quickly learned made her knees buckle and had her gasping.

And that’s when he knew standing at the kitchen sink was no longer cutting it. He needed her. Wanted her. And from the sounds she was making and the way she was moving against him, Darcy felt it too.

This time when he reached down and cupped her ass, he lifted her up onto the counter. Stepping in close until he was firmly pressed against the juncture of her thighs, he cursed their clothes. Cursed the fact that the nearest soft surface was so damn far away. And cursed the fact that she tugged at his hair as she pulled away from him.

A little dazed, he forced himself to open his eyes and focus on her. Her lips were wet and red and a little swollen, and her skin was flushed.

Resting his forehead against hers, he took a minute to catch his breath.

Was he supposed to apologize? Step away and start shoveling? Hell if he knew, but he was going to stay quiet and let Darcy say whatever it was she was thinking. So he didn’t move, and once his breathing was back to normal, he almost felt as if he was holding it.

“What are we doing?” she asked quietly.

Was she serious? Those were some fairly obvious moves going on, on both their parts! How could she be questioning it? And on top of that, she was the one who had initiated it! Lifting his head, he looked at her.

“I thought we were kissing,” he said simply.

She blushed, and it was sexy as hell to see. His fingers twitched with the need to touch her cheeks and feel the heat there.

“I…I know, but…I guess I’m just a little confused as to where that all came from.”

She was confused? Because now he was a little beyond that himself. Taking a step away, he frowned. “Why don’t you tell me?” he began levelly. “Since you were the one who reached up and pulled me into the kiss in the first place.”

The blush was instantly replaced by a look of mild annoyance. Darcy jumped from the counter, placing her hands on her hips. “I guess I got caught up in what I thought was a moment. I mean you came over and crowded me into the cabinets and then started touching me—out of the blue, might I add—so I guess I thought you were into it too.”

Oh yeah. He had forgotten about that part. Once she had reached up and kissed him, Ben had pretty much forgotten about his own actions leading up to it. “Fine. Yes. I came over here and—” He stopped and cursed, raking a hand through his hair. “I don’t know. I wanted to do that since you first showed up here.”