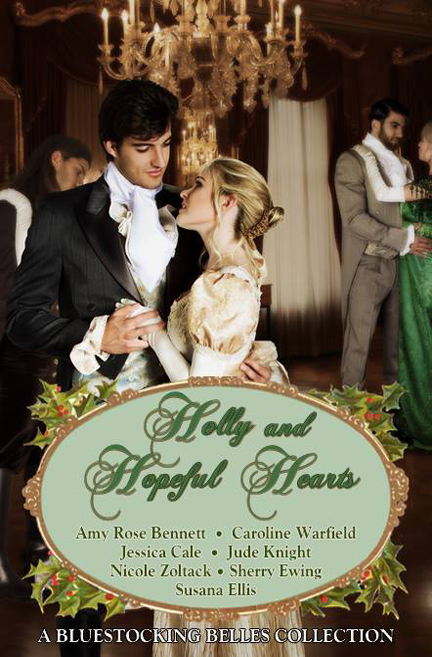 A Kiss for Charity by Sherry Ewing
within Holly and Hopeful Hearts: A Bluestocking Belles Collection

Young widow, Grace, Lady de Courtenay, is more concerned with improving her mind than finding another husband. But how was she to know that a close encounter with a rake at a masquerade ball would spark her interest and make her yearn for love again?

Lord Nicholas Lacey has been on his own for far too long after losing his wife in a tragic accident. After a rare trip to a masquerade, his attention is captivated by a lovely young woman. Considering the dubious company she keeps, perhaps she might be interested in becoming his mistress…

From the darkened paths of Vauxhall Gardens to a countryside estate called Hollystone Hall, Nicholas and Grace must set aside their differences in order to let love into their hearts. It will take more than a dose of holiday cheer to see these two on the road to finding their happily-ever-after and a kiss for charity may just be what they both need.

Arms of steel wrapped around her waist to prevent her downward pitch. Her rescuer’s cape whirled around their bodies as though the cloak itself would conceal them from the night and those around them. Fathomless dark eyes were all but hidden in the black mask that concealed his features, yet, a flicker from the walkway lanterns hinted at their color. His eyes were brown, much like his hair, she surmised, if the curls that formed around the edges of his hat and mask were any indication.

Grace gasped as he quickly maneuvered her off the pathway to save them from being run over by the eagerness of the crowd. She shivered, but not from the cold for she was far from chilled. No. She quivered from the warmth that raced up and down her spine at being this close to a man, let alone held intimately for the first time in many years.

His deep voice went straight to her heart. His low tone plummeted down to reach into the very depths of her soul to awaken a part of her that had been left dormant as though she had been waiting for him her entire life. Waiting… yes she had been waiting for someone to come along who would give her this sudden feeling of completeness, even though he was a total stranger.

The realization of what she was doing hit her as if a bucket of icy water had been thrown over the top of her head. He was asking her something, but her brain could not wrap itself around what he had inquired.

“Pardon me?” she asked in a breathy whisper of astonishment, especially when she realized she had been caressing the lapel of his jacket beneath his cloak.

His arm tightened around her. She watched in mild fascination as one side of his mouth turned up in a cocky grin. He knew exactly how her body was reacting to their close proximity.

“I asked if you were hurt, although I might also beg for an introduction.”

“I h-hardly think this en-encounter is a-appropriate,” Grace stammered. Was that actually her voice sounding so unsure of herself?

He leaned down, and, for an instant, she thought he was about to kiss her.

“How utterly charming that I have you all tongued-tied.” His words whispered gently in her ear were almost her undoing.

Before she could comment, Moriah’s voice was heard above the noise of the crowd, and she quickly untangled herself from the man who did nothing to hide his disappointment.

“There you are,” Moriah declared as she stared up at the stranger. Grace could only imagine what was going on inside her friend’s mind, given their recent conversation. “I am sorry I lost you. Are you all right?”

Grace nodded. “Yes… of course. Thank you, sir, for your assistance this evening,” she murmured shyly to the gentleman whose lips turned up into a charming grin.

He raised his fingers to tip his hat towards her. “It was my pleasure to rescue a fair damsel in distress.”

Her eyes followed him through the crowd until he disappeared. Her heart hammered in her chest. What in the world had just happened? Sherry Ewing picked up her first historical romance when she was a teenager and has been hooked ever since. A bestselling author, she writes historical & time travel romances to awaken the soul one heart at a time. Always wanting to write a novel but busy raising her children, she finally took the plunge in 2008 and wrote her first Regency. She is a member of Romance Writers of America, the Beau Monde & the Bluestocking Belles. Sherry is currently working on her next novel and when not writing, she can be found in the San Francisco area at her day job as an Information Technology Specialist. You can learn more about Sherry and her published work at the following social media links: ABOUT HOLLY AND HOPEFUL HEARTS

A Suitable Husband, by Jude Knight

As the Duchess of Haverford’s companion, Cedrica Grenford is not treated as a poor relation and is encouraged to mingle with Her Grace’s guests. Perhaps among the gentlemen gathered for the duchess’s house party, she will find a suitable husband?

Marcel Fournier has only one ambition: to save enough from his fees serving in as chef in the houses of the ton to become the proprietor of his own fine restaurant. An affair with the duchess’s dependent would be dangerous. Anything else is impossible. Isn’t it?

Facing a dim future as a spinster under her mother’s thumb, Vanessa Sedgely makes a practical decision to attach an amiable gentleman who will not try to rule her life.

The last thing widower George Durand thinks he wants is another wife, but his difficult daughter is proving difficult to handle. In any case, the admirable Miss Sedgely is far too young for him.

A love match is not even a remote consideration for these two. Or is it?

A Kiss for Charity, by Sherry Ewing

Young widow Grace, Lady de Courtenay, has no idea how a close encounter with a rake at a masquerade ball would make her yearn for love again. Lord Nicholas Lacey is captivated by a lovely young woman he encounters at a masquerade. Considering the company she keeps, she might be interested in becoming his mistress. From the darkened paths of Vauxhall Gardens to a countryside estate called Hollystone Hall, Nicholas and Grace must set aside their differences in order to let love into their hearts.

Actress Charlotte Halfpenny is in trouble. Pregnant, abandoned by her lover, and out of a job, Charlotte faces eviction two weeks before Christmas. When the reclusive Earl of Somerton makes her an outrageous offer, she has no choice but to accept. Could he be the man of her dreams, or is the nightmare just beginning?

The Bluestocking and the Barbarian by Jude Knight

James must marry to please his grandfather, the duke, and to win social acceptance for himself and his father’s other foreign-born children. But only Lady Sophia Belvoir makes his heart sing, and to win her he must invite himself to spend Christmas at the home of his father’s greatest enemy.

Sophia keeps secret her tendre for James, Lord Elfingham. After all, the whole of Society knows he is pursuing the younger Belvoir sister, not the older one left on the shelf after two failed betrothals.

Louisa Wycliff, Dowager Countess of Exeter wants only for her darling daughter, Anna, to find a man she can love and marry. Appallingly, Anna has her sights on a scoundrel of a duke who chases after every skirt he sees. Anna truly thinks the dashing duke cares for her, but her mother has her doubts.

When Lady Exeter insists on Anna befriending a marquis’s son, a man Anna thinks is far too crude, Anna learns all about the trials her mother went through to find love herself. Only time will tell if Anna can find true love this Christmas season.

An Open Heart, by Caroline Warfield

Esther Baumann longs for a loving husband who will help her create a home where they will teach their children to value the traditions of their people, but she wants a man who is also open to new ideas and happy to make friends outside their narrow circle. Is it so unreasonable to ask for toe curling passion as well?

Adam Halevy prospered under the tutelage of his distant cousin, powerful banker Nathaniel Baumann. He’s ready to find a suitable wife, someone who understands a woman’s role, and will make a traditional home. Why is Baumann’s outspoken, independent daughter the one woman who haunts his nights?

Dashing Through the Snow, by Amy Rose Bennett

Miss Kate Woodville, teacher and bluestocking, enjoys her independence, thank you very much. But when a very determined viscount insists she accompany him on a mad dash through the snow to Gretna Green to stop his younger sister, Violet, eloping with Kate’s own brother, she has little choice but to go. She’ll risk the ruin of her own pristine reputation if it means she can save Freddie from Lord Stanton’s wrath.

As they race along the road north and then back to Hollystone Hall in Buckinghamshire for a New Year’s Eve charity ball, hearts and wills are certain to collide. But will anyone—Freddie and Violet, or Kate and Lord Stanton—find the path to everlasting love?

The Bluestocking Belles, the “BellesInBlue”, are seven very different writers united by a love of history and a history of writing about love. From sweet to steamy, from light-hearted fun to dark tortured tales full of angst, from London ballrooms to country cottages to the sultan’s seraglio, one or more of us will have a tale to suit your tastes and mood. Come visit us at http://bluestockingbelles.net and kick up your bluestockinged heels!

BLUESTOCKING BELLES ON THE WEB