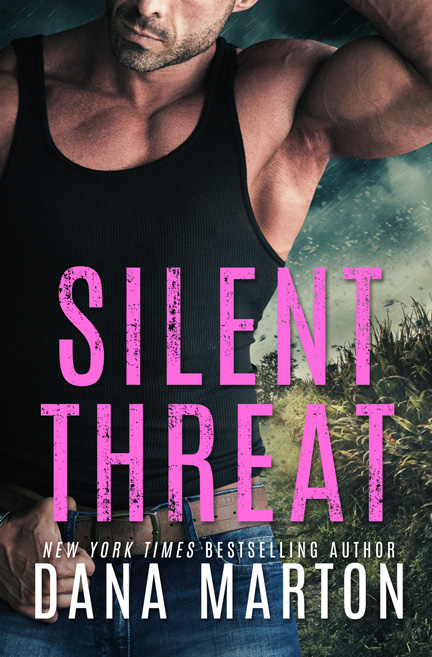 SILENT THREAT is not like most romantic suspense novels. It’s not ‘super warrior hero saving cute/feisty heroine in trouble.’ Cole Makani Hunter is a former Navy SEAL who lost his hearing and the use of his right arm overseas. He lost his best friend in a chopper crash, then suffered through six months as a POW before escaping and walking out of the mountains.

My grandparents raised me through most of my childhood. In her fifties, my grandmother went blind from cancer. At about the same time, my grandfather completely lost his voice to cancer. He could only communicate through us reading his lips. Which, of course, my grandmother couldn’t see. Imagine the two of them in a house, year after year. Yet they had an immense amount of love in that house, and all the grandchildren LOVED visiting them. It was our favorite place in the universe.

I think it’s incredibly important to write characters outside of the ‘perfect hero’ mold. People who can’t walk, talk, hear, or see also deserve their happy ending. You don’t have to be perfect to deserve love, either from God or the people in your life. There are no requirements at all for love and redemption. I think everyone deserves to see themselves in book and movie characters, even if they’re not ‘Hollywood perfect.’ Maybe even especially, if they’re not ‘Hollywood perfect.’

There’s a verse in the Bible that I like more than any other. “A cracked reed he will not break, and a flickering candle he will not snuff out…” (Matthew 12:20) I’ve always taken this as affirmation that it’s okay not to be what others perceive as perfect. There’ve been many times in my life when I very much felt like a cracked reed or a candle that’s barely flickering. God is okay with that. He will not break me and toss me on the garbage heap. And if God is okay with all my broken parts, then so am I.

So SILENT THREAT is not like most romantic suspense novels. It’s not ‘super warrior hero saving cute/feisty heroine in trouble.’ Cole Makani Hunter is a former Navy SEAL who lost his hearing and the use of his right arm overseas. He lost his best friend in a chopper crash, then suffered through six months as a POW before escaping and walking out of the mountains. His self-identity is that of a warrior, an intensely physical man. With his physical abilities compromised, he very much views himself as damaged, over and done with. He doesn’t want therapy for his PTSD. No amount of therapy is going to give his hearing or his right arm back. Except, none of that matters when his ex-commanding-officer asks him to go undercover at a VA rehab center to find a traitor. As long as his heart beats, Cole is going to do what his country asks of him.

Annie Murray is an ecotherapist (someone who heals people by connecting them to nature). She has her doubts when she’s assigned to Cole who she thinks is like a cross between a grizzly bear and a navy destroyer. Cole resists every attempt at help. Annie is very much the strong one in the relationship. Her strength comes from her empathy, kindness, and inner balance—not the kind of strengths that Cole is used to.

Ten books or so into my writing career, someone told me that for a book to be good, it must have a strong ‘theme.’ And I was like, “Really? You’re telling me this now? Couldn’t someone have mentioned this while I was writing book one?” Since I’m a glutton for punishment, I went through the books to identify what a good theme could have been for each. Surprise! They each had a theme. Even bigger surprise, each book had the same theme: redemption. For all of the books. I’ve written another thirty plus books since, and redemption is still my theme for nearly every one of them. I think there’s no setback you can’t come back from. And, frankly, I don’t believe a person is ever ‘broken’ or no good or any less than anyone else, just because they might lack an ability. My grandmother was the perfect loving grandmother the way she was. My grandfather was the most remarkable man I’ve ever known, exactly the way he was. And I think Cole in SILENT THREAT is every bit as much of a hero as any ‘perfect’ movie hero out there. A former Navy SEAL, Cole Makani Hunter has returned home from a disastrous black ops mission without his best friend, his hearing, or the use of his right arm. So when his ex–commanding officer assigns him to an undercover mission at a rehab center for vets to discover who leaked sensitive military information to an enemy, he’d rather be anywhere but there. Almost immediately, Cole finds himself at odds with Annie Murray—a peace-loving ecotherapist whose dream is to open an animal sanctuary out of her home. While the two seemingly have nothing in common, their spirited arguments soon fuel a passion for each other.

But just as things begin to heat up between therapist and patient, dangerous complications arise. So does the past—and a shocking revelation that puts Cole and everything he now holds dear in the path of a murderous traitor. Dana Marton is the New York Times bestselling author of the Agents Under Fire series, the Hardstorm Saga, and the Broslin Creek novels. She is the winner of the Daphne du Maurier Award for Excellence in Mystery/Suspense, the Readers’ Choice Award, and the RITA Award. For more information about Marton and her work, please visit her at www.danamarton.com or on Facebook at www.facebook.com/danamarton.