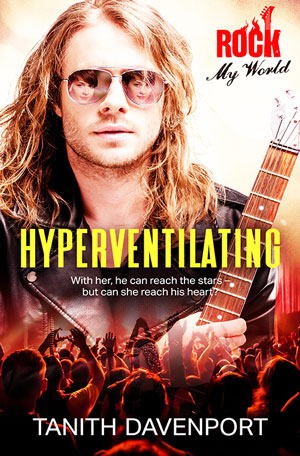 With her, he can reach the stars—but can she reach his heart?

Amber Blake is fleeing a terrible betrayal in her past by touring with rock band Puppetmaster as a make-up artist with her best friend Elyse. Knowing the band is struggling, she hopes to use her make-up skills to reinvent their image, but when a member of the crew drops out, Amber finds herself asked to contribute in a different way—in the form of heated sexual conversations with hot lead singer Cassian Marsh, to put him in top form before every concert.

Despite her past, Amber is unable to resist Cassian’s charm and raw energy, and enjoys knowing she can drive him wild with just her voice, but their increasingly passionate meetings leave her longing for more…

Book 1 in the Rock My World series 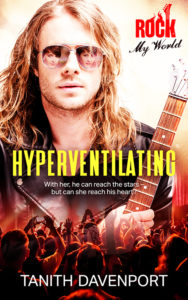 With her, he can reach the stars—but can she reach his heart?

Amber Blake is fleeing a terrible betrayal in her past by touring with rock band Puppetmaster as a make-up artist with her best friend Elyse. Knowing the band is struggling, she hopes to use her make-up skills to reinvent their image, but when a member of the crew drops out, Amber finds herself asked to contribute in a different way—in the form of heated sexual conversations with hot lead singer Cassian Marsh, to put him in top form before every concert.

Despite her past, Amber is unable to resist Cassian’s charm and raw energy, and enjoys knowing she can drive him wild with just her voice, but their increasingly passionate meetings leave her longing for more. Can she move past the betrayal she suffered? And can she convince a man as commitment-phobic as Cassian to break his no-dating rule and let her into his heart?

A flash of light, the howl of guitars and the air filled with anticipation. The show was about to start.

Shielded from the crowd’s gaze, Amber Blake stood in the wings, carefully positioned to be just behind the line. This was her favourite part of the evening—that build-up, that moment when excitement was at its peak, just before the crash of drums and the burst of noise that preceded Cassian’s entrance onstage.

The intake of breath before the scream.

At the far end of the stage, Max, the lead guitarist, appeared under a spotlight, guitar at the ready. At the back, Eric and Nate were behind their keyboard and drum kit, respectively. All it needed now was—

Then, accompanied by a roar of amplified sound, Cassian launched himself into view, striding confidently onto the stage towards the microphone.

“Nate’s smudged his fucking mascara again,” Elyse commented from behind her, and Amber reluctantly turned to face her.

“How can you even see that from here?”

“He’s just rubbed his eye. I spent ages getting his make-up right and he’s ruining it.”

Amber shook her head in amusement and returned her gaze to the stage. Elyse could curse her boyfriend out all she wanted, but Amber’s attention was firmly on the ass of the man currently driving the crowd wild.

Tall, slim and tattooed, he was the epitome of a rock star, long, blond hair framing his square-jawed face, leather trousers clinging to his legs as he moved across the stage. He had the crowd in the palm of his hand without even opening his mouth—then the first note of their opening track Never Moved On cut through the air, and Cassian began to sing.

His raw rock voice rippled through Amber like fire.

There were days when she sincerely wanted to do nothing but listen to him play, listen to his voice arc through the air, watch him embody the music.

At the edge of her attention, she was dimly aware of her phone vibrating in her pocket. She ignored it, dragging her gaze away from Cassian to the other band members, her practised eye checking for any issues in costume or make-up.

“Eric’s lost a button on his waistcoat,” she commented to Elyse.

“I thought you fixed that yesterday?” Elyse glanced away from Nate to see where Amber was looking. “Oh, it’s a different one.”

“I don’t know what he does with them. I’ll sort it out in the morning.”

Elyse shook her head indulgently as she turned her eyes back to her boyfriend. Amber allowed herself a wry smile. They had been on this tour for three months now and it seemed none of the guys could keep their costumes straight for five minutes.

Despite what many of the band’s fans often thought, Amber and Elyse weren’t professional groupies. Amber had been told by many a grouchy fan that she wasn’t cute enough to be with the band. She was too elfin, too skinny, her short dark hair and ice-blue eyes gave her a pixie look which apparently didn’t translate as sexy to the starfuckers in the crowd. Combined with her pale skin and bright red lipstick, she looked more like a black-and-white wedding photo than a groupie.

As for Elyse, tan and athletic, long hair and eyes in shades of dark brown, she was often mistaken for a technician—not that she minded that. But theirs was a different role.

Being make-up and costume artists for Puppetmaster was a thankless task, but it was worth it to be able to see the show every night.

There was nothing in the world like a rock concert, nothing at all. The electricity in the air, the rush of the music, the sheer energy of the performance as Cassian strutted across the stage, leaping onto platforms, posing. And above all else the thrill of his voice, his movements, the way his lips formed the words and his hips beat to the rhythm.

Puppetmaster had started touring to promote their second album Thunderclap, their first album Velvet Glove having started to fall out of the charts. They were popular in rock circles, but their relatively minor chart success—Never Moved On had been in the top ten, but other tracks had fallen lower—meant they could only command comparatively small concert venues. Amber knew Cassian was already writing a third album, hoping for better sales to mean better publicity, but whether that would happen was open to debate.

She heard the shuffle of footsteps behind her, but didn’t turn.

Martin, their manager. Amber raised an eyebrow at his words. She was looking at him.

“He looks fine to me.” Amber kept her eyes on Cassian, who was striking a pose at the far side of the stage.

“No. He’s off his game tonight.” Martin sounded deeply annoyed. “I could murder that photographer.”

Amber kept silent even as a slow chill built in her gut. She knew what he was hinting at, and she wasn’t about to answer him. Not yet.

The music changed to a darker, heavier track and Amber felt goosebumps rise on her skin. If You’re Cold. This was one of their best ones.

Watching Cassian perform was definitely the best part of her job. During the day she never allowed her gaze to linger on him—at night was a different matter. At night she could hide in the shadows, no longer having to deal with the masks they wore every day.

Cassian behind his mask was just so…real.

But she had had enough musician boyfriends to know getting involved with another would be a bad idea, even if the men of Puppetmaster hadn’t been perpetually unavailable. Nate’s relationship with Elyse was considered a blip. Cassian hadn’t had a girlfriend in years.

And Cassian, she knew, was well out of reach.

But, God, was he worth looking at.

His lean, muscular arms exposed by his leather waistcoat, his slim hips, the tattoos that decorated his taut stomach, tempting her to follow their lines with her tongue. The way his sweat glistened on his skin as he moved, catching her eye with every motion.

But Amber knew, even if it were possible, it would be a very, very bad idea.

And she had had enough bad ideas to last a lifetime.

But as the show went on, she found herself reluctantly agreeing with Martin.

Cassian was off his game tonight.

He was phoning it in, and she knew why.

Which meant that, despite Cassian’s unavailability, she was going to have to rock his world. 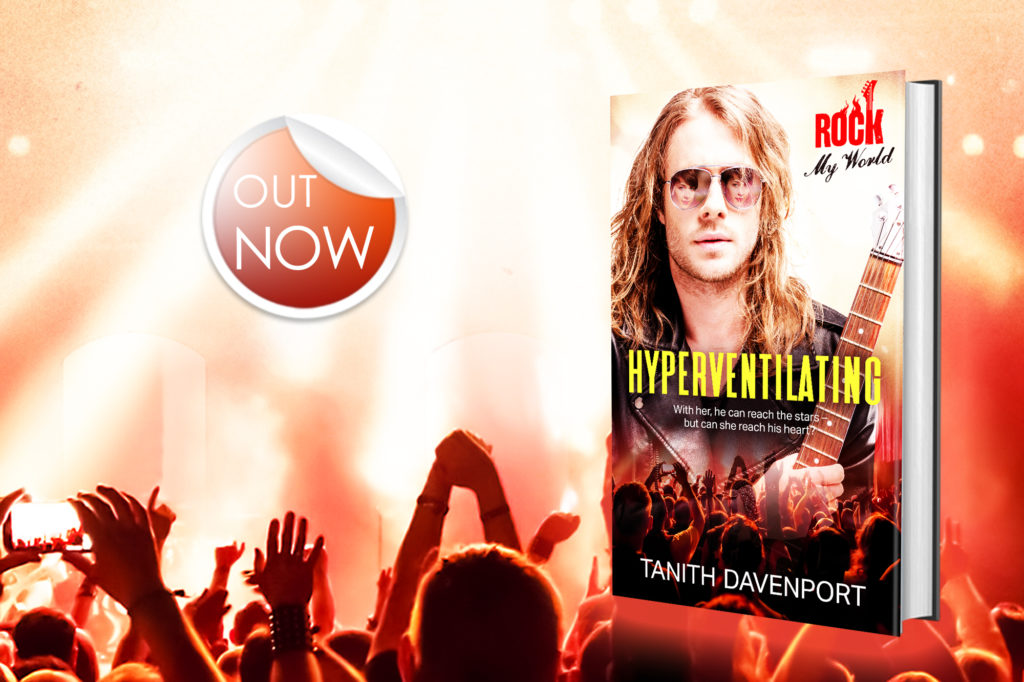 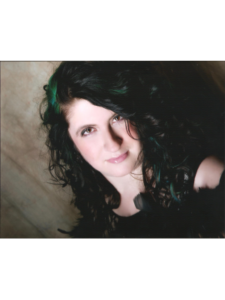 I first started writing seriously when my tutor on a creative writing course pointed me towards the Romantic Novelists’ Association and their New Writers’ Scheme. Thanks to them, my debut novel “The Hand He Dealt” was accepted by Totally Bound in 2011 and was nominated for the Joan Hessayon Award for 2012. I haven’t stopped writing since.

Last year my short “Spiritwalker” was released as part of the “Some Like It Haunted” collection by Totally Bound. This year I’m working on two new shorts plus the upcoming release of my back collection as audiobooks.

When I’m not writing, I love to read historical fiction and non-fiction as well as anything paranormal. I love to sing, watch horror movies and go to rock concerts. I also have two cats who like to hide all day and then destroy the house at night.