“Psst. You. The one with the chocolate-fingerprinted keyboard. Will you give me a scene already? I’m dying here.”

“Kill me off? You think you can kill ME? We’ll just see about that.”

I am Jeannie Ruesch, and I admit the above sentences are actual thoughts that have run through my head… not, I am compelled to point out, when I’m sitting at my computer praying for my characters to show their faces.  No, that would be normal.

I’m talking about completely inopportune moments, such as standing in line at the grocery store, toddler strapped into the seat, checkout person waiting impatiently for my money.  THAT is often when my characters decide to confess their deepest thoughts and finally admit to that motivation that stemmed from something that happened when they were three.  Three? Are you serious? I have to stop what I’m doing and write out their back-story from the time they were practically born?

Ludicrous, right? I can jot it down when I get to the car or even when I get home.  However, my characters are quirky that way.  If I don’t give them their due time when they want it, tantrums will ensue or worse, silence.

Characters, at least the ones rattling around in my head, are fragile things.  If I had to label them like schoolchildren, mine would be the ones in the back of the classroom.  The rebels.  They tend to do what they want when they want, and if they aren’t happy with my rules and dictates, more than one has upped a finger at me.

About now you are thinking (go on, admit it) I need a good shrink more than anything else.  You may be right, for here is my ultimate confession – I choose to talk and think about my characters like they are people.  In order for me to write about and understand them, they have to be.

I was thirteen years old when I read my first romance novel.  I couldn’t tell you what the title was, who wrote it or really even much of the plot.  What I do remember is that I identified with the teenage heroine struggling to find the courage to talk to the boy she liked.  Boy, did I get her.  At the time, like every other girl in the school, I had a huge crush on the most popular boy.  His name was Tommy.  (Hmm, now that I think about this, I wonder if it’s coincidence that the villain in my upcoming novel is named Thomas…)   And just like the girl in the book, I did some humiliating things to try and get his attention.

While I failed miserably, the book’s plucky heroine got a better ending.  I’ve never forgotten her.  As a reader, I identify with characters because of their quirks, because they are real, because they make me feel like I could actually know them.  So as a writer, I knew I had to relate to my characters the same way.  I had to give them voices.  I had to let them become friends, so I could understand better who they are.  And yes, I talk about them as if they are sitting in my living room, eating my popcorn and watching American Idol.

Because, really.  They are. 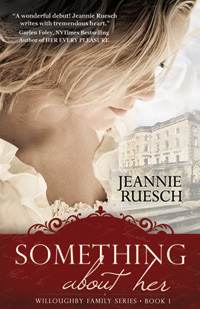 He is the one man she knows she shouldn’t trust.  She is the one woman he knows he can’t have…and the only one he wants.

Read chapter one at www.jeannieruesch.com