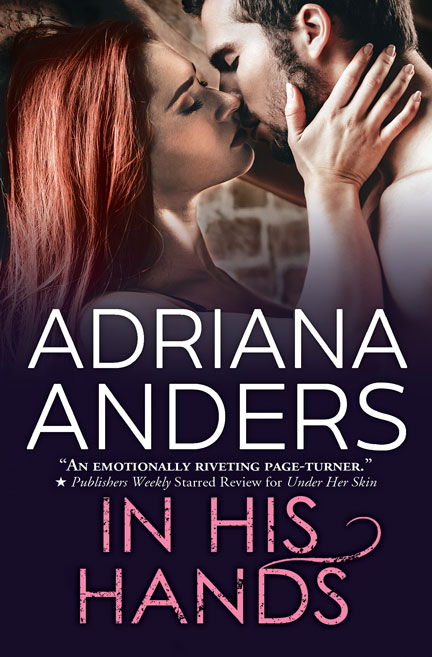 He should frighten her, but everything inside Abby thrills at Luc Stanek’s rough manners and shockingly gentle touch. He excites her, ignites her, leaves her shaken and wanting more. But evil men follow in her footsteps, and it may take more than one fierce beauty to defend her loving beast… The rules are simple:

Never yearn for something more.

And never, ever seek the pleasure of a stolen kiss…or a whispered promise that with him, she can finally be free.

He should frighten her, but everything inside Abby thrills at Luc Stanek’s rough manners and shockingly gentle touch. He excites her, ignites her, leaves her shaken and wanting more. But evil men follow in her footsteps, and it may take more than one fierce beauty to defend her loving beast.

Luc swallowed, his eyes glazing over.

“We shouldn’t have kissed,” he said, looking angry with himself.

“You’ve never done it before?”

“Not really,” she whispered, knowing full well it was time to walk away. But I don’t want to. “I want another one, Luc.”

“Another what?” he asked, looking truly puzzled for a few seconds.

He shook his head, only instead of the refusal she expected, he said, “I can’t stop thinking of your mouth.”

She pressed her lips together subconsciously. Her body was glued in place, but her mind raced ahead. How would it feel, in here, with no eyes to see them? No weather to disrupt them? Would the wrath of God reach in through that enormous window and strike her down?

What if it didn’t? What if…

It didn’t matter. Let him punish her. It was too late, anyway. What was a little kiss after the thoughts she’d denied since the first time she’d seen this man?

“Kiss me,” she whispered, full of the knowledge that this could well be the end. What if he doesn’t want this?

She watched as he reached out to graze her dress with his fingers. Just the fabric, not the body beneath, but even that was heady, different. New.

“You want this.” It wasn’t quite a question. If anything, the words came out disbelieving.

That did it. Whatever it was. Like they’d busted through their shell, only it was more like a dam had blown, and the man she’d known until this moment—quiet, contained, restrained—transformed into something wild. Unleashed.

Several feet away one moment, the next they collided.

It felt like falling, inside and out, a fatalistic succumbing. She could barely contain a sob when his skin finally touched hers, his lips moved to her neck, his hands on her shoulders. One hand went to her nape, cupping, cradling, but firm as well. And his face, as it made its way from the hollow beneath her ear, up and over her jaw, her cheek, to her mouth… Gracious, the man was drinking her in, learning her, smelling her.

And she wanted to do the same to him.

By the time his lips made it to hers, she thought she’d be ready for it. She was wet between her legs like she’d never been in her life, and heavy, too heavy to move.

Only somehow, her hips were doing a dance all on their own, tilting toward him.

He stopped right before her mouth. “You want this, Abby?” His whispered words felt wrenched from his massive frame, each one a hot little brand against her face.

“I’m afraid,” she whispered in his ear.

“Goodness, no.” She almost laughed. “I’m afraid of what God’ll think.”

It might sound absurd when he said it like that, but they couldn’t all be wrong, could they? Mama and Isaiah, Hamish and the other folks?

And was this really just a kiss? That hardly seemed possible.

She couldn’t think straight with the smell of him so close. Like nothing she’d experienced, it was heady and intriguing, and all she could think was This is what a real man smells like.

“What happens, over there, if you do something sinful?”

“By who? God or the man who leads the Church?”

Weren’t they one and the same? “Guess I’m not sure anymore.”

“We shouldn’t do this, then,” he said, running the back of his hand over her cheek and behind her ear, where his fingers sifted through her hair. “I don’t want to hurt you, Abby.” He sounded tortured. Was this the punishment—this strange, frenzied fluttering, this agony of need? “I’ve never…I’ve never been with someone like you.”

“Innocente.” The word, his accent, the strain of his voice—all of it built and built until she could barely breathe. Her lungs were so full, she’d die if something didn’t ease the pressure.

Tell me it’s wrong, she prayed. Show me a sign.

“Just ’cause I haven’t done things doesn’t mean I haven’t thought of them,” she admitted.

With a growl, he kissed her, and Abby didn’t stand a chance against that kiss. No, it was so much more than a kiss, drawing at parts of her body that shouldn’t be connected to her lips. And not just her lips, but her tongue and teeth, her nose, her face, all of it prey to that mouth and those callused hands. It came together in a mixed-up cloud of dark, confusing sensation she’d never even fathomed. She’d never been so aware of herself before, of her skin, explicit, right and lush.

I’m going to die, Abby thought. This is going to kill me.

She’d had no idea before. None. She’d seen people kiss when she’d worked in the market—had watched surreptitiously, entranced, as the couple in the alley went way beyond just mouths into certain sin—and she’d wondered what pushed them to act like that. Lord, now she knew.

He muttered something against her cheek before biting her jaw, gently—not enough to mark, although suddenly, she wanted him to with something close to compulsion.

Never had she pictured this…this overwhelming wave of need. Goodness, the things she needed right now.

To be touched. Her skin ached with it. This body that had never had eyes upon it. She wanted him to eat her

up with his gaze.

He stepped away instead, backing into the bar, looking agonized.